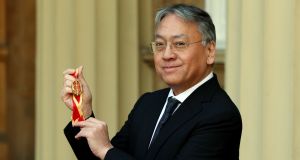 Novelist Kazuo Ishiguro has described his newly awarded knighthood as forming part of his “big love affair” with British culture. Ishiguro, whose novels include The Remains of the Day, Never Let Me Go and An Artist Of The Floating World, received a knighthood for services to literature on Thursday.

The ceremony, which was held by Prince Charles, was a “humbling” experience, the author said.

Ishiguro, who moved to the UK from Japan aged five, added: “It is all part of my story of coming from a different country and growing up in this country. It is part of my big love affair with Britain and British culture.”

There is “something pleasing” about moving from what had been regarded as an “enemy culture” following the second World War and finding success in the UK, Ishiguro said, adding: “I have been allowed to have such a privileged career here.”

His late parents would view the knighthood as “a vindication of their will to move”, he added.

Ishiguro, who said he first met Prince Charles while working as a grouse beater for the Queen Mother, added: “I feel I am taking my place alongside all these other people who do very wonderful things as part of this society, many of them not in the public eye.”

He was joined at the Buckingham Palace ceremony by his wife and daughter. “I think they are rather thrilled,” he said. – PA