Publishing struggles, creative writing classes, the magic of Mayo, artistic influences, mortality and wonderful women are on the agenda this month 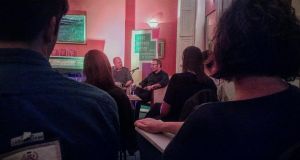 “Mayo does penance and atonement,” says Mike McCormack. “Knock, Croagh Patrick, it isn’t a coincidence these are in Mayo”

Welcome to the Irish Times Book Club podcast, recorded earlier this month in association with the Irish Writers Centre in Dublin’s Parnell Square. This month’s title is Solar Bones by Mike McCormack, currently shortlisted for the Goldsmiths Prize.

It is 20 years since McCormack’s debut collection of stories, Getting it in the Head, won him the prestigious Rooney Prize for Irish Literature. Two years later came his fist novel, Crowe’s Requiem, then a seven-year gap to its follow up, Notes from A Coma, described by John Waters as the best Irish novel of the decade, then another seven-year gap before his second collection, Forensic Songs in 2012.

I ask McCormack about the stretches of time between his works coming out – how much of that was to do with the pace at which he worked, and how much to do with his struggle to have his voice heard in a publishing world perhaps more focused on the till than the experimental.

“If you have that experimental twist, you make things hard for yourself,” he has said. “But as my wife Maeve said to me, it isn’t my job to get published . . . it is my job to write.”

We discuss the arc of his career as a writer. As he has matured as a person and an author, have his concerns changed and his approach altered? “I have always liked writers who write the same book, ” he once said. The standout story in Getting it in the Head, for example, is a blackly comic meditation on self-alienation and postmodern celebrity in which a sculptor dismembers himself for the sake of his art. Is there a direct line from that to the artist daughter in Solar Bones?

Knives are a recurring feature in McCormack’s books, but it is interesting how they turn from symbols of violence to becoming in Solar Bones a venerable, domesticated object, a kitchen knife worn smooth by time.

It is perhaps apt that this podcast is first aired on October 31st, Halloween, just before All Souls Day, when our thoughts traditionally turn to our departed loved ones and the border between the living and the dead, always porous, is broken down.

“So many of my stories ended up with people dying,” McCormack told Belinda Mckeon in an interview in 2005. “I could see the mortality rate getting worse and worse. And I thought, if we kept going like this, I’d be dealing one day with a book full of dead people – and I didn’t want that. So in this book I killed him off, such as it is, right at the beginning and I spent the rest of the book resurrectin’ him, talkin’ him back to life.”

McCormack studied philosophy as well as English at UCG, having previously dropped out of an electronic engineering degree.

To what extent are his novels a vehicle for the smuggling of his ideas of the world? “There’s a span in this book from sandwiches to stars, and I think it tries to try to sing a song to connect those two things,” he has said.

We also discuss his experimentation with form. Solar Bones is famously a novel made up of one unbroken sentence, while his earlier novel, Notes from a Coma, has a split narrative with an “event horizon” – “they are not f*cking footnotes”.

Solar Bones is also a hymn to that neglected if not endangered species – engineers. The novel itself is a remarkable feat of engineering – the largest single-span sentence ever constructed.

“I’ve always admired engineers,” McCormack has said. “I’ve said it before, that artists paint the world and writers write the world but engineers build the world. God gave us heaven and earth, but the world is the work of engineers.”

Locale is also a significant factor in his work. The author himself can’t quoite believe that all his works are set within the boundaries of a few acres in Mayo. “Mayo does penance and atonement,” says McCormack, citing its three dead hunger strikers in the second half of the twentieth century. “Knock, Croagh Patrick, it isn’t a coincidence these are in Mayo.”

Mia Gallagher likened Solar Bones to WG Sebald and Rob Doyle in his Irish Times review saw traces of Sebald’s doom-laden ruminations. Is that a comparison he can relate to? Emphatically not, as it turns out.

But enough writing - have a listen.

Martin Doyle edits the books section of The Irish Times