Sinéad Gleeson: ‘I wanted it to be a mix of canonical and contemporary’ 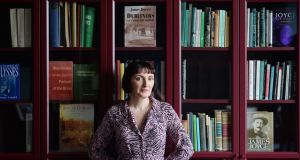 Sinéad Gleeson has edited a new collection of Irish short stories called The Art of the Glimpse. Photograph: Alan Betson / The Irish Times

Where do you start when you’re charged with putting together a “greatest hits” of 100 Irish short stories? This was the brief given to the Dublin writer Sinéad Gleeson for a new anthology, The Art of the Glimpse, published by Head of Zeus.

A hundred is a tricky number, large enough to give the illusion that there’s room for everyone. But in a country known for its pedigree in the short story form, Gleeson discovered that the numbers quickly creep up. As someone who is deeply involved in the arts scene in Ireland, and who frequently champions the work of other writers, was she worried about omissions?

“It doesn’t matter what the number is, some people will say, ‘You didn’t put so-and-so in,’” Gleeson says in a wry voice. “Look, we all have our biases. I’d be the same. You won’t like every story in a 100-story anthology. I wanted it to be a mix of canonical and contemporary. The size gives you scope to do this. You can put in the new writers. You can aim for diversity. You can aim for people who’ve been long out of print. Resurrected writers. LGBTQ writers. You can look at ethnicity.”

In a world of Zoom interviews, it’s a rare treat to talk writing with Gleeson in the James Joyce Library in the Museum of Literature Ireland on St Stephen’s Green. It’s a bright September afternoon and a small wedding party is taking photos in the picturesque gardens. Two floors up, we’re surrounded by books on Joyce. The man himself has made it into the anthology, though not with Gleeson’s favourite story, The Dead, which was too long for a book of this size. Other writers from the canon include Mary Lavin, Frank O’Connor, Liam O’Flaherty and Elizabeth Bowen.

You have to surprise people because anthologies have been around for a long time and my experience of them is that they were very samey.

Gleeson tried to avoid the obvious, better-known stories. “With Frank O’Connor, I didn’t pick Guests of the Nation. I tried to pick outside of what everybody thinks is the definitive story by each writer. You can have a lot of fun with that. You can introduce people to stories they haven’t read before.”

She chose the Bram Stoker story A Young Widow because it was comic in tone. “People are probably thinking, ‘Great, a big scary Dracula story,’ and it’s not, it’s very funny. You have to surprise people because anthologies have been around for a long time and my experience of them is that they were very samey.”

In recent years Gleeson has edited two anthologies of stories by Irish and specifically Northern women writers – The Long Gaze Back and The Glass Shore – that looked to address this problem. The scope of the new anthology is broader than gender but the impetus remains: to give a platform to forgotten or marginalised authors, dead or alive.

“There’s a woman called Elizabeth Cullinan, an Irish-American writer who died this year,” Gleeson says. “She published lots of stories in the New Yorker in the ’70s and nobody really knows her. Her story in the anthology is about a time that she lived in Ireland and went to Howth on a date with a man, and the man in the story also happens to be one of the writers in this anthology. I really liked that. But it’s so easy to be forgotten. You can have a big American publisher and a few decades later you’re gone.

“Norah Hoult is the same. She only died in 1984. Her story in the anthology is a sex worker story published in Ireland in 1938. I’ve tried to find that collection to buy and I just can’t. People slip through the cracks. Look at Maeve Brennan. No obituaries in Irish or UK papers when she died in 1993. It happens easily and very quickly. Maybe because we live in a digital age this will change.”

Change is an important part of The Art of the Glimpse, specifically the huge social and cultural shifts we’ve seen in Ireland in recent decades. The list of authors includes many of the new wave who have won acclaim at home and abroad for their work. Within the 768-page tome are stories from Donal Ryan, Sally Rooney, Danielle McLaughlin, Colin Barrett, Lucy Caldwell, Eimear McBride. Meanwhile, the likes of Kit de Waal, Oein DeBhairduin, Chiamaka Enyi-Amadi and Melatu Uche Okorie bring a welcome diversity to a field that has historically been white and male.

Gleeson says we still have a way to go with gender but that the bigger conversation at the moment is about race and inclusivity. “I’m so happy to have Oein DeBhairduin’s story in here because where have the platforms been for Traveller voices? That amazingly folkloric oral culture, from Cant/Gammon, their own words and vocabulary. What are we missing out on by not having those stories in books or places we can find them? That’s a longer conversation.

“In Ireland it’s not as bad as the US or the UK, but the shifts towards the right bring with them discrimination towards people on the margins. In this country, that’s Travellers, people of colour, LGBTQ people. Those voices need to be heard and that’s why there are so many of them in this book.”

I think transwomen are women, transmen are men, and trans rights are human rights

JK Rowling reignited the debate on trans issues earlier this summer when she published an essay outlining her opposition to proposed legislation in Scotland that would make it easier for trans people to legally identify as a different gender. Where does Gleeson stand on the matter?

“I think transwomen are women, transmen are men, and trans rights are human rights,” she says. “I find it deeply distressing that this targets a group who we all know have a higher incidence of violence and suicide. I really don’t understand why people [who call themselves feminists] have an issue with them. It’s like Flavia Dzodan says: my feminism will be intersectional or it will be bulls**t.”

Gleeson is similarly candid when it comes to elitism in the literary world. The author, whose debut essay collection Constellations won the best non-fiction category at the 2019 Irish Book Awards and the emerging writer award at the inaugural Dalkey Book Awards, says she’s suspicious of people who think the word “genre” means lesser.

“My taste for fiction has tended towards literary but I also grew up reading a lot of crime and horror short stories. I’m obsessed with ghost stories. I absolutely love them. I read a lot of sci-fi – Harry Harrison, Stephen King – all those novels. So I like the idea of a mix. Canons can exclude people but so can thinking that an anthology has to be a literary one. I don’t agree with that.

“One of the best Irish writers is Marian Keyes [whose story Under features in the anthology]. There’s an assumption sometimes that women’s writing is less worldly or political or important than men’s. If you look at Marian’s books, you’re dealing with some of the most difficult, universal subjects: depression, alcoholism, death, loss, addiction, all these kinds of hard subjects.

“I really wanted Marian to be in this book, in the same way that Maeve Binchy is in it. I think Maeve is an incredible wit and writer both in fiction and non-fiction. I wouldn’t see the point of having an anthology that was linear or contiguous in terms of the writers involved. That’s why there are genre writers and YA writers, experimental writers, queer stories, ghost stories, stories that are unclassifiable set beside the canonical ones.”

In addition to editing the mammoth anthology, Gleeson has been working on a novel but found herself juggling freelance work, writing and childcare when the pandemic hit. “My husband is self-employed in the arts as well so it wasn’t ideal,” she says. “We wouldn’t have been able to afford full-time childcare even if it was available. To write you need silence and quiet, and you’re not going to have that in a house with two kids.

“At the same time, you’re worried about them missing their friends, the lack of sociability. I was worried for my parents, who are both over 70, and my Mam has had cancer twice. But we were also aware that we had a home, none of us were sick, nobody we knew was seriously ill. We both still had some income.”

She says her own long-standing health issues – she had monoarticular arthritis as a teenager and leukaemia in her 20s – have given her a sense of perspective during the pandemic. “I talk about this in Constellations, but one thing I realised is that there’s always someone having a worse time than you. I’m really used to thinking about my health and mortality and death and hospitals and needles and the lot of it. But most people aren’t and it’s really frightening when you have your first encounter with it.”

Everyone’s fed up with being anxious. They just want to go out and see their friends and family and go to a bar or someone’s house, and you can understand that.

Gleeson believes that the pandemic is making people think about the bigger philosophical questions.

“That’s not necessarily a bad thing. But the problem is there’s no timeframe. We don’t know how long. Everyone’s fed up with being anxious. They just want to go out and see their friends and family and go to a bar or someone’s house, and you can understand that. Unfortunately it’s going to be a lot longer than we think and no one wants to really face up to that, myself included. But you have to adjust.”

And, in the meantime, you can always get stuck into a new anthology of 100 stories by Irish writers. The Art of the Glimpse may just be the perfect book for these strange, confining times.