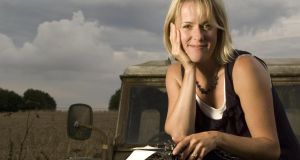 Jojo Moyes: Still Me is the third instalment in the life of her character Louisa Clark. Photograph: Phyllis Christopher

Still Me is the third instalment in the life of Louisa Clark. It finds her in the New York home of the Gopnik’s, where she assists Agnes a Polish immigrant and reluctant socialite.Throughout the novel, Louisa struggles to assert her independence and maintain a relationship with boyfriend Sam. Her problems are exacerbated by Joshua, a young American who resembles deceased love, William Traynor. If you are not acquainted with Moyes’s previous work, it is of little consequence. The book equips the reader with enough detail to enjoy the novel in isolation, but also entices them to explore Louisa’s past adventures.

Moyes’s style is descriptive, but often excessively so which can make for a tedious read. The novel introduces issues of class, sexuality, race, and mortality, but never seeks to unpack them. It upholds the parameters of its genre and never strays too far from romantic cliches. The message of Still Me is a simplistic concoction of female independence and self-acceptance. It will not challenge you intellectually, and is unlikely to be considered for the Man Booker, but is that the point? The composition, although lacking in stylistic sophistication is an easy, enjoyable read, ideal for those seeking a few hours of escapism. Anna Joyce

Against his better judgement, Andreas Lehman returns to the island off the Norwegian coast where he grew up, and to the dilapidated house of his childhood following the death of his foster father Johannes, who raised him and his sister Minna. As he sorts through the old man’s belongings, a darkness in the island’s history and in his own family seeps into the present, asking questions about what we are capable of, about guilt and memory.

The book thrums with building intensity, the writing deceptive in its simplicity but with a hypnotic rhythm and cadence which echoes the novel’s dreamlike exploration of the past, of the shadows which loom. With harmonies and discords to Shakespeare’s play, it expresses the power of nature in its beauty and cruelty, how there are monsters which lurk within and how myth and legend build their own kind truth. Most of all it questions our own understanding of what has gone before: “That something is closely remembered does not always mean you recognise the reality of it.” Ruth Mckee

Most characters are living to die and few are dying to live, though all are of the opinion that death is indeed hard work in this steely and unsettling novel from the Syrian born Khaled Khalifa.

Three estranged siblings are forced to journey in a minivan from Damascus to their ancestral home, Anabiya, with their father’s corpse slowly rotting in the backseat. Although the novel is short, it is dense and immersive, filled with lengthy reports on the political situation in Syria, musings on mortality and moving accounts of life in a warzone.

The plot unfolds, predominately in flashbacks, as the three siblings, Hussein, Bolbol and Fatima are stopped at each checkpoint and forced to bribe, beg and lie their way to reach their father’s future grave. The novel forces the reader to confront their own mortality with darkly comical lines which will either inspire or enervate “[People are] a collection of walking lumps taking up space, spending their lives striving to negate death”. Mia Colleran

I’m a Joke and So Are You

We are terrified of being seen to be ridiculous but that is just what comedians do for a living, “highlight their own absurdities, weaknesses and ridiculousness”. Robin Ince, comedian and polymath, questions why comedians seek “the nightly approbation of strangers” as a career. There’s no single childhood experience or brain composition that accounts for one becoming a comedian, he finds, but he gets great fun testing out his various psychological theories. He also examines the subject of taboos and offence, showing that they can be both an individual and a cultural reaction. His chapter on how we use humour to cope with death, closely based on personal experience, is moving and insightful – even therapeutic. The best moment of being a stand-up comedian, he says, “is when someone tells you that you made life a little easier”. This wide-ranging and well-researched book hides its deceptive depth in an easy to read, witty and conversational style. Brian Maye

I Will Never See the World Again

Novelist Ahmet Altan was arrested in September 2016 by the corrupt forces of Recep Tayyip Erdogan. I Will Never See the World Again is the product of his incarceration, smuggled out into the world beyond his prison, essay by essay.

In a place where time does not seem to pass, Altan listens to his fellow inmates, using his storytelling vocation to remember and imagine their lives and their pasts.

Yasemin Çongar’s translation of her friend’s words from the original Turkish is both delicate and robust; there is a lyricism to this prose that the reader intuitively feels must somehow transcend language itself.

CS Lewis once wrote that we read to know we are not alone and he surely had a book such as this in mind. Not so much a narrative as a series of generous, enlightened and deeply life-affirming meditations on what it means to be human in an inhuman world, Altan’s memoir liberates the soul even as it throws its author’s captivity into excruciatingly sharp relief. Becky Long

The Book of Joan

The Book of Joan does so many things at once it makes your head spin. A post-apocalyptic dystopia, it is set on the space station CIEL and on a dying Earth where there are wars over resources in the last days of the human race. As the narrator faces her own extermination at the age of 50, she tells the story of the rebel Joan.

The novel envisions how humanity evolves in the future – hairless, with only remnants of genitalia, almost no sensory experience and with skin that can be stretched to act in the place of paper. People on CIEL now “graft” words onto their skin, which is how the narrator brings us the story – literally embodying the text.

Frenetic with action and an acrobatic plot, it reimagines the story of Joan of Arc in this late 21st-century scenario. Although blistering in intimate detail, the tone is detached, possibly because its theories about representation, gender and story itself are arguably more important than the characters. It’s like Hélène Cixous meets Margaret Atwood: hugely intellectual and deeply provocative. Ruth McKee