Sexuality and metatextuality – a novel in dialogue

A new way of looking at gender roles, marriage, prostitution, fiction and reality 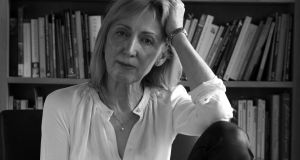 Vesna Main: “while the longevity of the novel demonstrates its ability to remain relevant to us, the genre’s continued vitality has been maintained by its ever-changing form”

- A novel? But it’s in dialogue. All through. Except for a few pages in the middle.

- A novel in dialogue.

- Why would anyone want to do that?

This is how it starts: a writer has a story she feels needs to be told. She has heard a radio interview with a woman whose husband had been visiting prostitutes for many years of their allegedly happy marriage. Moved by the woman’s pain, she has interviewed other wives who have been in a similar situation as the radio interviewee and has read widely on the subject of prostitution, from academic and legal papers, newspaper articles and accounts by prostitutes themselves. She learns about the damage caused by pornography and how the social construction of sexuality and our upbringing affect us. She is reminded that most sex workers are forced into prostitution by poverty and often by drug addiction.

She has a great deal of material and a strong plot. She models her characters, Richard and Anna, a middle-aged, middle-class, professional couple, on conversations with other women who have found themselves in the same position as the radio interviewee.

But, and there’s the rub: for the writer, literature is art, not a vehicle for dispensing agendas. Her feminism and her politics may permeate her texts but they are neither the starting point nor the aim. Nor does she like being constrained by research; if she does any, it happens only after the first draft.

This is a new way of working for her. Usually, ideas come from an image or a word: a gesture or a grimace makes her reach for her notebook. Whatever the prompt, she never knows where it will lead or even whether she will end up with a short story or a novel. She is interested in writing as a process, language and form, not so much in the plot.

She writes two versions of the novel, both in a classic realist style, alternating between Richard’s and Anna’s points of view. While, in her own mind, the man is at fault in the sense that she doesn’t wish the woman to share the blame for what he had done, she can see that everyone is damaged. She presents them as flawed characters and links their shortcomings to society.

But these are the methods central to classic realist texts, the type of fiction that doesn’t resonate with her. With their reliance on psychological character-consistency, social circumstances and above all with their comforting closure, she believes such texts belong to the positivism of the Age of Enlightenment, the age of moral and philosophical certainty.

I am not suggesting that she thinks there are no moral absolutes today. Rather, the complexities of our systems of communication, together with the death of transcendental meaning in a secular world, as well as our ideas on the fluidity of identity, all call for other forms of writing, those of our time.

While the longevity of the novel demonstrates its ability to remain relevant to us, the genre’s continued vitality has been maintained by its ever-changing form, from the modernism of James Joyce and Virginia Woolf to our contemporaries, notably Eimear McBride, Mike McCormack, Gabriel Josipovici, Anna Burns and Lucy Ellman, to mention just a few of those writing in English.

Unhappy with her two versions, she, or I, abandoned both.

I accepted that I couldn’t do justice to the story of the woman with a husband visiting prostitutes, by which I mean that I didn’t know how to highlight the depth of her hurt and to send a firm message that prostitution is wrong. While I couldn’t incorporate that message in the ideal text that I always have in my mind, I didn’t wish to abandon it either.

Out of nothing came the idea to write a novel in dialogue, in which the Writer discusses her work in progress, the story of Richard and Anna, with the Reader, her husband. However, now I worried that the form might take over and that the consequent blurring of the relationship between the two couples might obscure my message.

The Writer and the Reader, the two main characters, are opinionated and disagree on almost everything. Their differing points of view prevent us from identifying fully with one or the other and the textual polyphony forces the reader constantly to switch their allegiance from one to the other, constantly to re-examine their own position. In that way, the form allows a dialectical interrogation of gender roles, marriage, the role of prostitution in our society, the idea of the writer using the lives of those close to her in her fiction and the relationship between fiction and reality.

Surprisingly, given the complex interweaving of the issues, most readers have found the text very easy to read.

The novel’s metatextuality is a good example of how the form generated another layer, unrelated to the main story. While in a conventional narrative the writer makes decisions, in Good Day?, not only are those decisions delegated to the fictional Writer, but as soon as they are voiced, they are questioned by the Reader. The ensuing discussion is a way of dealing with the issue at hand without endorsing either point of view since we never see the final version of the novel the Writer is creating or discover to what extent she takes notice of the Reader’s criticism.

In that way, the novel she is writing remains forever a work-in-progress. Their disagreements highlight the contingency central to writing a novel. Consequently, neither interpretative nor narrative closure is possible. Indeed, the latter is a topic the Writer and the Reader return to repeatedly as they express diametrically opposing views on what should happen to the marriage of Richard and Anna. Happiness or tragedy? In the end, I had to leave it to them; who was I to impose?
Vesna Main is author of Good Day?, which has been shortlisted for the Goldsmiths Prize