Mícheál Ó hAodha, translator of This Road of Mine (Mo Bhealach Féin), on a neglected great 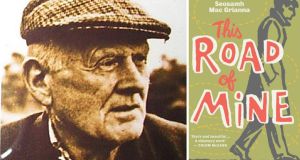 Seosamh Mac Grianna (1900-1990), who until recently remained relatively unknown even in Ireland, is revered by the Irish-speaking minority as one of the most important 20th-century writers in modern Irish

It might have taken a while – nearly 100 years! – but Seosamh Mac Grianna’s classic autobiographical road-trip Mo Bhealach Féin, first published in 1940, and a cult classic in the Irish language is finally available in translation (This Road of Mine) and should garner a much wider readership worldwide as a consequence.

Mac Grianna (1900-1990), who until recently remained relatively unknown even in Ireland, is revered by the Irish-speaking minority as one of the most important 20th-century writers in modern Irish but also one of the great stylists of the language, a man who carved out a radical new idiom in the oldest vernacular in Europe.

Along with Ó Cadhain and Ó Ríordáin, he broke new ground in his successful fusion of the oral Gaelic tradition, stretching back thousands of years, with a modernist literary perspective, all of this against the background of the emergent Irish State.

Mac Grianna was born into a family famed for their storytelling, in 1900, in Rann na Feirste, part of the Donegal Gaeltacht at a period when the cataclysm of the Great Famine was still within living memory. His world was, as Pól Ó Muirí ably puts it, “part of a united Ireland, under the British Crown, at a time when the sun did not set on the British empire…He saw the War of Independence and the Civil War that followed and chose the republican, and losing, side. He saw partition draw a scar across Ulster and he saw native governments in Dublin try and give Irish an honoured place in a new, truncated, Ireland. He wrote during it all…”

There is no need to explore the fact that writing in the language of a tiny minority puts you on the “outside” and marginal to the national literary canon. This is just a reality. What makes Mac Grianna’s courage as a writer all the more remarkable however is that he chose to write in Irish when he could as readily have written in English. He wrote in Irish – a language that was then subject to all the revivalist cliches of the era, a language that was (and is) of no commercial value and rarely mentioned in polite society or seen as a bit of a embarrassment when it was – “the language of the poor, of the poorest, of the most marginal and disdained”.

More crucially still, he forged a new and modern medium in the language, one which ranks alongside Orwell and Beckett in English as regards its sparse beauty and simplicity, a language that is highly poetic.

As a translator, it is a particular joy when one comes across a voice that is unique and powerful all at once. And, similar to the heroic figures of times past, with whom he saw himself having a particular affinity, Mac Grianna strikes hard from the very first line of This Road is Mine – “They say the truth is bitter, but believe me, it’s harsh and this is why people avoid it.”

Mac Grianna wished to find the truth about himself, about the world, even in its harshest aspects and even where the truth is most avoided. This is a “vision” literature of a different hue and with a different energy and he embraces the first steps of his road-trip in poetic language:

“It was early in my life that I saw it stretched out before me, the road of my heart’s desire, the winding path skirted by peaks more beautiful than any hills found in music and the breath and the breath of wind above more perfect than any earthly breeze…”

He has embarked on an inner journey of the mind, one where the artist questions the nature of creativity, truth, and the very meaning of life and art. Similar to Joyce – “When a man is born...there are nets flung at it to hold it back from flight,” Mac Grianna’s quest is an existential one where he seeks to free himself from some of the nets that would frustrate his artistic development or tie him down.

He stands against the “consensus” and rejects everything that would obstruct his artistic vision. His love of art, truth, beauty and the open road mean that he rejects the materialistic and mercantile nature of the nascent Irish State, the cronyism, the corruption and every form of injustice that affects society as a consequence.

He becomes the walking contradiction that is the Gaelic “holy fool”, restless and in constant flight from one lodging house to the next, dodging rent one minute and lending money to the down-at-heel the next, he gives up his conventional job of translating books into Irish and tries his hand at fortune-telling. He eats in chip-shops and kicks off philosophical debates with the Dublin poor and the Salvation Army. He addresses a Communist meeting and travels around the country on a seemingly futile journey with a republican activist.

Growing weary of Dublin, he resolves to test body and soul and sets out on a long, lonely journey from Cardiff to Scotland, as sustained by the rich wells of poetry and myth in his mind. This journey along the roads of England and Wales is much more than a simple test of endurance, however. It is the quest, the inner journey of the mind.

As with many of Orwell’s writings, Mac Grianna’s meditations on the nature of art and truth display a strange prescience today, almost a century later, when the question of truth and its interpretation (or re-interpretation or how it is “spun”) has re-emerged as one of the most crucial philosophical questions of our day.

Most enjoyable of all, however, particularly from a translator’s perspective is the fact that Mac Grianna explores such important questions in a way that is “down-to-earth”, accessible and often very funny by relating them to the characters and incidents he meets with along the way.

A dark and sardonic humour imbues his writing that he utilises to quickly get to the core of each question, many of which are as relevant today as ever. To take just one example, his discussion of the then-current theory of the “food chain” and his highlighting of how reliant all human beings are on one another is as relevant today in this COVID era as ever.

So too, Mac Grianna’s interest in Garveyism, (a precursor to the Black Power Movement), while in Wales, and his discussions with other formerly colonised peoples regarding class warfare and the economic underpinnings of modern society.

Mac Grianna viewed himself as an “outsider” to the “establishment” and the system and unsurprisingly was attracted to others he met along the way who were in the same boat as him. Anyone who challenged the “status quo” was a source of fascination to him, another trope that still resonates strongly in Irish and western culture today. What makes his achievement all the more remarkable is that his active writing life lasted for just 15 years. Sadly he was dogged by ill-health and spent most of his life in hospital having been struck down with a depressive psychosis in 1935.

In Mo Bhealach Féin (This Road of Mine) Mac Grianna re-engages with characters from the Irish past and people and places that retained enormous significance for previous generations. He breathes new life into aspects of our culture that have remained dormant for far too long – Parthalán, the Churl of the Grey Coat, Macha Mongrua and the Táin – to name but a few, and gives them a powerful new impetus and relevance throughout the course of his narrative.

He does all of this utilising a modern sensibility and a style that moves easily between the philosophical, the mundane and the poetic. It is a truism to say that literary translation helps us to engage with the world and to shape our understanding of it in new and essential ways. It is a truism that bears repetition nonetheless.

Hopefully, this unique Irish writer who was born and lived in remarkable times, and his literary achievement will now receive the recognition that is his due.
This Road of Mine is published by the Lilliput Press