The Irish vicar revered in Japan as the father of hockey

Yoshiko Ushioda has written a memoir about a life dedicated to caring for Japanese art masterpieces in the Chester Beatty Library in Dublin, and other stories 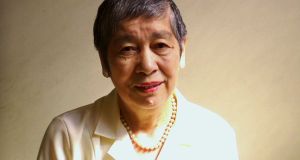 Yoshiko Ushioda: first came to Ireland from Tokyo in 1960

I first came to Ireland from Tokyo in 1960 with my baby son, to join my husband, who’d travelled ahead to take up a research fellowship in chemistry at University College Dublin. Little did I imagine then that, more than 50 years later, I would still be living here, or that I would be dedicating my life to caring for Japanese art masterpieces in Ireland. This book tells the story of my experiences as a Japanese émigré in Ireland and my work as curator of the Japanese Arts Collection at the Chester Beatty Library in Dublin. Here, I’ll recount just a couple of episodes from this memoir.

“You shouldn’t work on Sundays!”
So said an elderly Irish gentleman in perfect Japanese, smiling, as he watched my husband proudly washing his Morris Minor in our driveway while my toddler son romped around the front garden. We set aside our chores to chat with this impressive, smiling gentleman who was fluent in Japanese and who lived with his wife in a small cottage across from us. It wasn’t long before we became very close friends.

William Gray was a retired Anglican minister and he and his wife had lived in Japan before the Great War. He was born in Ireland in 1875, and after graduating from the School of Divinity in Trinity College, Dublin, he moved to Japan in 1905 and stayed in Tokyo until 1914. During this period he married Sophie Mary, then a student of the University of the Sacred Heart in Japan, whose parents were also missionaries. After their wedding, they spent their honeymoon in Nikko. Mr Gray showed us photographs from the period. It made him happy to recount their memories of the time they’d spent in Japan. After returning to Ireland, and with the intervention of the two world wars, he had sadly lost touch with his Japanese friends.

One day, I happened to be reading a copy of the Weekly Asahi magazine that we had sent over regularly by surface mail. Starved of anything in Japanese to read in Ireland in the 1960s, I would always devour each issue from cover to cover. On this occasion, I came across an article entitled “The Father of Sports”. One of the questions posed was, “Who is the father of hockey in Japan?” Believe it or not, the answer it gave was “the late Mr Gray, an English minister working in St Andrews Church in Iikura, Minato Ward, Tokyo”. “Could that possibly be our neighbour, Mr Gray?” we wondered. We visited him to find out. “That’s me!” he replied, and his wrinkled face filled with tears – a sight I can’t forget even now.

Over the next few days, I wondered how to inform people in Japan that Mr Gray was in fact very much alive and well and living in Ireland. I decided to write a letter to the editors of the magazine, and this letter generated a huge amount of interest in Japan. A flood of letters started to arrive in our letterbox from people who had known Mr Gray, and I ended up spending my time translating these letters for him. The letters came from people who had known and played hockey with him when he had introduced the game to students at Keio University in 1906, having been an active hockey player at Trinity College. These games are remembered as the first hockey matches played in Japan. Letters also arrived from people who’d joined Keio University Hockey Club (“Gray Club”) in later years and had come to love the sport. Even to this day, Mr Gray’s grave in Mount Jerome Cemetery in Dublin sees visitors from Japan.

“I’ve never seen such a photo of my father!”
So exclaimed Prof Miya, through smiles and tears. This was in September 1988, when I was in Japan for the “Homecoming” exhibition of Ireland’s Chester Beatty Collection: Tales of Japan, to be held at the Suntory Museum and other venues. I had travelled from Dublin with Satoru Sakakibara, a curator at the Suntory Museum, bringing 65 precious Japanese artworks from the Chester Beatty collection. To tie in with the exhibition, NHK Educational Television was producing a special programme featuring the Chester Beatty Library’s excellent Japanese picture books and scrolls from the medieval and early modern period. The programme was also supposed to describe the role I had played at the library. In addition to clips they had already filmed in Dublin, they were going to record my time in Japan, from my arrival through the unpacking and preparations for the exhibition. The programme was also set to include a round-table discussion filmed in one of the studios.

Before filming, I was showing members of the panel discussion some photographs I had brought from Dublin that we would use on the show. Prof Miya of Jissen Women’s College was one of the panel members, and when, unexpectedly, he spotted his father in one of these photographs, he let out a cry. He was looking at a photograph taken in 1917 during a welcome party for Sir Chester Beatty and his family in Japan, arranged by Sadajiro Yamanaka from the Yamanaka Company in Osaka. The photograph showed Sir Chester with his wife and their daughter dressed in a kimono, as well as Mr Yamanaka sitting with geisha girls between them. At the very left, dressed in a kimono, was Prof Miya’s father. According to Prof Miya, his father had worked for the Yamanaka Company and had visited the New York and Boston branches. It was quite something to think that the foundations of the relationship between the Chester Beatty Library and Japan had been laid way back in 1917. I will never forget Prof Miya’s cry at the sight of his father in that photograph from long ago.
Yoshiko Ushioda’s memoir, Caring for Japanese Art at the Chester Beatty Library, is to be published next month by Dalkey Archive Press. It is translated by Etsuko Kanamori, who lives in Dalkey, Co Dublin