June Caldwell brings an ultraviolet gaze to bear on the grubbiness of human hurt and the cruelty of desire, writes Elske Rahill 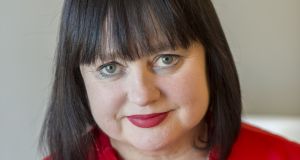 Although ostensibly outrageous in theme, the stories in Room Little Darker are all rooted in the grimness of materiality, where trauma lives in the plaster walls and our bleeding, shitting, wanting bodies are our most stifling prison. The collection delves into extremes – fetishism, states of non-living, and chemically-modified sexuality – but, at core, these are the tales of everyday heartbreak.

Leitrim Flip chronicles the fate of a master-submissive pair who find themselves trapped in a cage in the back-of-beyond with no escape in sight, routinely ordered to perform as the bitch and dog for a genuinely abusive couple and their “rubber gimp” guests. As in many of these stories, fetish is characterised by a coldness seeking its inverse. Sex drive and death drive; omnipotence and abjection fantasies collide, and our narrator takes us on a tour of self-degradation and immurement that is slowly, subtly and expertly revealed as an attempt at sublimation:

“After it’s all over we’ll curl tightly together, snuggling into well-deserved sleep. Free to run at breakneck speed along the most beautiful sweep of beach. Tearing up lumpy dips of sand so relentlessly our tails stop wagging and our legs collapse under the weight of yummy ecstasy. Running, scampering, sprinting, until nothing we’ve ever been through before matters.”

In Dubstopia – a story of a once-in-love couple destroyed by poverty and addiction – the “two lezzers on the couch” are all too real: “One of them, skinny as rashers, was pretending to grate her tongue. ‘Yewer fucken gas,’ her bird said, bending over for a sludgy on the cake hole. Both wearing dolphin necklaces, glitter leggings, squeegees of burnt yellow hair in bobbles of teapot spouts.”

Most of these stories are narrated in the stark, bigoted and unapologetically impressionistic voices of Dublin’s quietest – a paedophile, an addict, a delusional stalker and even a foetus kept growing in a brain-dead host. Caldwell has something of Des Hogan’s forensic eye and the kind of freely-associated imagery that works by instinct, but is hard to unpick:

“Out past the squiggle of purposeless shops and homeless men who nudge their heads up like broken birds from splintered eggs in the basement of the church.”

Clamouring with anomalous analogies, piles of adjectives, an indulgence of simile and warring imagery, the prose may at times seem to lose the run of itself, bamboozling the reader into retreat – “The droplights buzzed like a circle of certifiable bluebottles… Then quick as weather in February, they were gone…” More often than not, however, the manic prose fits the situation, and, the payoff is there in the deep-dug sense of a city teeming with soon-to-be forgotten lives: “Up Henry Street with its orgy of phone shops and factory leggings and onto wet brush Moore Street. Last of the stallholders manically plying for trade outside the Euroscoff supermarkets that had colonised the gaff. On by Ballsy Bingo where his Ma used to take him long ago. All those mad bitches with Rothmans-stained chins…”

What is particularly striking about this collection, is the combination of unfettered authorial rage in some stories, and the total absence of a mitigating voice in others.

The Implant is the story of betrayal that manifests as a disastrous contraceptive implant. Reading it is like being grabbed by the hair and shoved inches from the blood clots, agony and bitter revolt of a body deceived. A palpable, unfettered anger runs throughout: “a mangled little pissgimp crying your snot out, all pleasure and comfort is soup to nuts aborted. He’s shat on YOU goodo. He killed you off ladybird. He’s churned you up all violent again.” It is overwhelming, and the reader is irresistibly drawn in to rally against the cheating boyfriend.

Narrated by a gestating foetus in a brain-dead body, the very concept of the story SOMAT is dangerously complex. The voice begins by recounting that of the mother: “Magus of my future, she is packed with a million woolly things to say to me…” When that voice falls silent, it is replaced by the voices of those laying claim over her womb. This is no straightforward manifesto. The atrocity of growing a motherless foetus is laid bare, but only through the personification of the foetus – a political act in itself. How, after all, can the transubjective speak, if not in mergence with the mother? This story makes it happen through a plausible scenario: mother and the pregnancy are split when one dies and the other is kept growing through medical intervention. Now that her voice is gone, the state and family compete to represent a process of her body – the pregnancy, and this is the voice we hear. The reader is left with a sense of the liminal nature of pregnancy and pre-birth, the blank fact of that, and no indication of how to read it.

Boybot is another story where the concept is presented without comment. Michael, a non-practicing paedophile, is provided with a child sex doll designed to placate his taste for children while mediating his abusive potential. Michael is a rather reasonable and likeable fellow. His observations are witty and insightful as he imagines his therapist’s private life:

“Folding gingham tunics into the hot press scrupulously. Sleeve ends tucked in just so, thinking of hot dates in arthouse cinemas with chinos-wearing blockheads who’d encourage her to express her deepest feelings and weep if she had to…”

Most disarmingly of all, his love for his adult partner is rendered movingly authentic –

“We did our time there, didn’t we John? It was wonderful in so many ways. Those ridiculous parties, those wayward soirees! I have all these gorgeous memories of what it really means to be deeply loved… You really did give me life. I’ll honour that and live it to the max. Take care my sweet beautiful love.”

He treats his paedophilia like an unfortunate appendage; an unfortunate illness, or a physical addiction. There is no attempt to analyse the root of this orientation; and no attempt to address the danger of conflating homosexuality with paedophilia – the author has disappeared, and instead we are left in the hands of a charming and utterly unreliable narrator, laying out his story on his own terms. The flip from conscientious victim of a sexual orientation, to someone inherently cruel (he cannot control his violent impulses, and effectively rapes a protesting robot), is treated with measured coolness and a complete lack of analysis. We must make of it what we will.

At times, the unapologetic starkness of stories like SOMAT and Boybot seem to skirt the complexity of the scenarios, but perhaps the refusal to philosophise or turn out answers is what is interesting in them.

This cacophony of voices is bookended by two quite different stories of family death and psychic scarring, where Caldwell’s use of the surreal serves her best. In both the opening and the closing stories, the fantastic elements testify to the necessity of fiction for accessing the “real”.

Upcycle describes the lizard-ferret manifestation of father-wounds, creeping about his daughter’s ankles, scouring her walls, flickering murkily across her mirror; “slinking in and out of the bed bars at my feet, leaving drops of sweat and other deposits for me to see in the mornings”. In the closing story, Cadaverus Moves, a beloved brother’s corpse is propped up in a bar by his bereaved sister before the narrator moves into a mindscape of their shared experience. Here, the saturation of imagery and language creates a kaleidoscope of love and damage that is as unsentimental as it is moving:

“You’re an egg-throwing mop of blonde. A fire toting Wild Indian of six burning fire spitting fire room to room. No one can stop you. A mother tries a sister tries two brothers try. Run screaming from room to room across the imprint of lino squares, kitchen press twine in your hair, hand smacking your mouth to make the screams even louder, bursting out in bags of air, breaking small toys under wildcatting feet, hands spinning, knocking everything over in your fireball of go sending newspapers weather balloon upwards, stories of guerrilla warfare in other countries far away… You start to twist on the ground, gripping your knees tight as you go, spinning like a tomato, howling out the words I will always be so happy to hear: ‘I am your brother, I am your brother, I am your brother.’”

In both of these stories the psychic bleeds into the “real” – metaphor becomes literal, and, reading these pieces, that seems the only authentic way of flaying bare the fleshy experience of family trauma and loss. We can’t reproduce what is “real” in any immediate or whole way. This is why we use language, after all; this is why we write fiction.