June Caldwell’s stories resist moments of epiphany, do not seek solace in sudden grace. They are testimonies to pain, loneliness, dearth and desperation 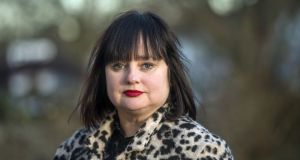 June Caldwell: climbs headfirst and bare-arsed into the helter-skelter flames and extracts a menagerie of perversion, malevolence and deviance. Photograph: Brenda Fitzsimons

These stories leave a bad taste in my mouth. This was one of the damming verdicts levelled at the great short story practitioner Flannery O’Connor. The year was 1955 and O’Connor had recently offered A Good Man Is Hard To Find to the world, a groundbreaking collection of unsettling comedy and sudden violence that would in time become an exemplar of the form. You were meant to read the stories, not eat them, was O’Connor’s typically robust reply to her interlocutor. I would pay money to hear what June Caldwell might have to say.

In her prescient (and intriguingly titled) contemplation on the craft of writing, Mystery and Manners, O’Connor conjures a metaphorical dragon (ferocious and fire-breathing) all of us must pass along life’s journey, a dragon we would do well to acknowledge, lest it devour us. Caldwell’s dragon appears in many guises (paternal spectre, talking foetus, rehabilitated paedophile, garrulous drug pusher, rubber-clad sex fiend) and not only does she stop to acknowledge them, Caldwell climbs headfirst and bare-arsed into the helter-skelter flames and extracts a menagerie of perversion, malevolence and deviance she is only too happy to unleash upon her unsuspecting readership.

For these are stories that come out of the traps blazing and roaring, spraying a fanfare of attitudes twisted, buckled and warped, and a population of grotesques, freaks, misfits and monsters that defy you to question their permission to exist. Ignore them and they will come after you, hissing and spewing their toxic fluids. Confront them and they will corroborate with knobs on your vilest suspicions. Deny them in your dreams and you better wake up and apologise.

A convicted paedophile reports to a past lover on the latest model of robot tasked with reining in his out-of-whack libido. A “controversial case” foetus relates the injustice of a comatose would-be mother’s situation (and by extension wags a finger at outmoded legislation). A student-lecturer match-up plays out an animalistic duet in a bad-part-of-town doorway. Stories, then, that offer extreme manifestations of what and how it is to be alive in the world. The set-ups alone make a season in hell seem like a wine and cheese-cracker party.

I had a teacher who would stride into class, take a blank sheet of paper, hold it up to his clutch of writerly wannabes and unapologetically announce, “this is a poem about happiness”. The inference being that subsisting on a comfortable plain of existence is not going to yield anything of worth, that instead we should be looking for something not-so ho-hum to preoccupy our creative selves, something to push against. The order of the day in Room Little Darker takes this particular prescription and plunges forthwith into a pit of vice.

Some of the stories (the collection’s opener, Upcycle, is a prime contender) have the material to span an entire novel. But to paraphrase Joy Williams (another spiky short story practitioner), too often novels want to be your lifelong friend whereas friendship is the last thing a short story has on its mind. The most effective short stories take risks, reinvent language, shave to the bone of truth and then keep going. If some of these truths are unpalatable it is most likely because they rub up against an intrinsic nerve, finger a core essence of being, they are reminders of the baser ideals lurking in the recesses of our psyche – as Caldwell amply demonstrates with her master-slave sex combo who take themselves on a field trip and get to bite off more than they can chew in Leitrim Flip. The message here (as well as elsewhere in the collection): if whips, shackles and cages are the food of love then roll me over and lash away.

And then there’s the prose – often amusing, always tough, living and breathing. The lyrical directness and wildly leaping humour an everpresent gift to the reader. Some of my favourites: In the retina of a running rabbit there’s an ache for warmth but it’ll never arrive (Leitrim Flip); I saw in his facial expression an ordinary man, insecure and damaged, frightened from fighting himself for so long...his seagull-in-flight upper lip...(Imp of the Perverse); Bottler staggered out of a doorway looking like a grade-A psycho who’d crack your toes off and use them as ear plugs for nights he was slumped under the motorway bridge unable to crawl to anywhere else. (Natterbean). All in all we are presented with an ever-frolicking threesome of form, content and style.

These are stories that resist moments of epiphany, do not seek solace in sudden grace. They are testimonies to pain, loneliness, dearth and desperation. They bear witness to how difficult being alive in the world can be. And, yes, they are stories peopled with freaks, monsters, grotesques; human beings who find themselves backed into corners and the measures they are willing to take to claw themselves out again, to endure. They disturb and unsettle and make us recoil. They tap into less palatable recesses, look-the-other-way truths. They are narratives that dwell within cum-coloured corridors and piss-reeking alleys. They are risk-taking salvos that time and time again serve notice of the less savoury jism we are made of (‘this tick of darkness between us’), and equipped with instincts that past-their-prime pigs would spring through burning hoops to get away from.

And time and time again we are introduced to one more deviant Caldwell has pulled from the dragon’s throat. The put-upon taxi driver who must ferry a ‘type of celestial cabbage he loathed’ across the Dublin nightscape in Natterbean. The hell-and-back desperation of the drug addict in Dubstopia. The experimental surrogate in The Implant who weighs it all up and decides that it’s just not worth it. Caldwell writes assuredly and without judgement about such characters because she is able to recognise them for what they are – monster, grotesque, freak – but as Flannery O’Connor tellingly puts it, to be able to recognise a freak you have to have some conception of the whole man – before, during and after his fall.

For evidence of this in Room Little Darker all you need do is turn to either of two stories that bookend the collection. That magnificent account of domestic shambles in Upcycle. And the fitting return to innocence in the reverse chronology heartbreaker of sibling devotion Cadaverous Moves. Nothing will ever be the same again seems to be the all-encompassing scream, and not only that: these scorching narratives take a decent stab at redefining what that nothing is.