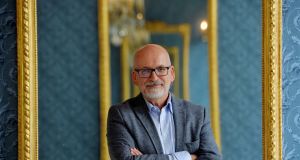 “I stayed up at the bar a few times but I didn’t want the barman thinking that I needed someone to talk to.” Victor Forde, the unreliable 50-something narrator of Roddy Doyle’s new novel, is freshly separated from his wife and apparently stranded in one of those couple-of-slow-ones Doyle sketches whose stichomythic dialogue poorly approximates prime, pub-bound Flann O’Brien. “–Stalin. –There was a fucker. –God, yeah.” But the comic bar-room clichés soon give way to the presence of a burly grotesque called Ed Fitzpatrick. This ex-builder in gaping shorts and pink shirt importunes Victor one night over his pint, then comes out with such lines as “The oul’ MILFs, you can’t fuckin’ beat them!” and “Did you ever get a tug from a woman that knits?”

More enigmatically, Fitzpatrick, whom Victor doesn’t recognise, claims they were at school together in the 1970s. Details gradually condense in Victor’s mind: a Christian Brothers school in a labyrinthine Georgian terrace; the casual violence of religious and lay teachers alike; a boyish choir rehearsing hymns for the funeral of an old brother, still living. And at Fitzpatrick’s bullying insistence, a so-far-nebulous set of memories about one or two of the teachers: “What was the name of the brother that used to fancy you? … Would he fancy us now, Victor?” Doyle’s protagonist shrinks from these weird intimacies, but finds himself drawn back to his local each evening, where his past comes to slow and uncertain life.

He met Rachel Carey outside a radio studio: she was parlaying her hip catering company into broad media celebrity

Victor has spent decades on the edges of literary success, but seems now to relish his demotion to a rented flat and solitary nights with a book in the boozer. On leaving school in the early 1980s he became a music journalist with a reputation for savaging bands already younger and more easily hurt than he was. A slot on RTÉ radio turned him into a cultural and political provocateur, and soon he was writing (or pretending to write) his first book, Ireland: A Horror Story. He met Rachel Carey outside a radio studio: she was parlaying her hip catering company into broad media celebrity, and soon they were glamorously together, being profiled in the pages of Irish Tatler. It was a while before Victor broke down and told her he’d been sexually abused by the head brother at school – told her the half of it, at least. And then told the nation on radio, but almost laughed it off.

Smile is keenly observed and moving when it comes to Victor’s unexpectedly exposed middle age. There is his effort at bravado in the face of solitude: the pretence that his sober apartment with its ill-stocked fridge is quite enough to be going on with, an insistence that austerity is a new start, the reversion to adolescent music-listening habits. Down the pub, Victor baulks at “a man of my age going back to some wrinkled version of his childhood. Looking for the girls he’d fancied 40 years before. Finding them.” But he embraces a version of what he’s embarrassed to be seen wanting: a group of men his own age who become tentative friends, a married local woman who wants little more than “a cuddle”. All the while, Fitzpatrick lurks, with his strangely jovial reminders of Victor’s blighted youth.

If Doyle had left it there, in the realm of desire and regret and things unsaid, he’d have had a conventional novel – more likely, novella – on his hands, even a mutedly elegant one. But Smile wants to be more: a book less about the subtle lures of memory than its violence, the capacity of the past not only to seep back at dusk, but come raging out from behind the curtains, intent on wreckage and madness.

What year was David Bowie’s Heroes released? When did ashtrays vanish from pub tables?

The clues to the novel’s more complex ambitions have been there all along in a rather clunky and literal concern with small historical details. What year was David Bowie’s Heroes released? When did ashtrays vanish from pub tables? When did “fuck” displace “ride” as a vernacular verb? Victor is both exact and evasive, intent on telling small and large truths, but given also to self-preserving inventions – not least when it comes to his vanished writing career.

So far, so subtle. But look away now if you must, because it’s hard to talk about the ultimate failure of Smile without revealing too much about its ending. Except to ask: who or what exactly is Fitzpatrick? A raw emanation of Victor’s savaged unconscious? An uncanny double out of Poe, James Hogg or Dostoyevsky? A real person, and survivor of abuse, enraged by Victor’s public evasions? If Smile is meant to be about the vexing effects of trauma upon the memory – “It’s like dropping bits of yourself”, says Fitzpatrick – then the answers to these questions risk semaphoring that message too clearly.

The novel seems to propose in the end a remarkably crude view of the psychic effects of sexual abuse. Or does it? The answer to that question depends on how willing you are to accept Doyle’s own narrative feints.