Book reviews: a round-up of the best music books including the story behind Glen Campbell's classic Wichita Lineman 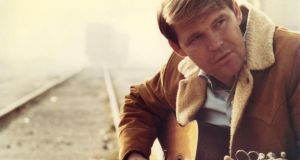 In these online-enlightened times, when too many music PRs have little or no interest in the music of the bands they promote, it is, perhaps, a good idea to know what it was once like for this much-maligned section of the music industry. Reading the highly evocative Fried & Justified, by Mick Houghton (Faber & Faber, £14.99), the first thing that pops out is how much the music meant. Houghton, who in 1980 set up the independent UK PR company Brassneck Publicity, so named thanks to The Undertones’ Billy Doherty (“it took months before I could comprehend a word any of the Undertones said”), loved the bands he worked with and for. Covering a halcyon time period (1978-1998) before the Internet swooped in and changed everything, Houghton’s tastes veered towards the arty and abrasive. From The Ramones and Talking Heads to Sonic Youth, Jesus and Mary Chain, and The Undertones, he ducked and dived their way, working it for them, loving it for himself. He doesn’t pretend to be something he isn’t, either, admitting that he could have had bigger fish to fry if only he’d held his music preferences closer to his chest. He recalls seeing Madonna mime at a poorly attended PA gig in a small venue in Soho in 1983, around the release of her third single, Holiday. Signed by Seymour Stein to Sire Records, Houghton was unimpressed. “I left wondering what on earth had possessed Seymour to sign her.” Them’s the breaks.

Cruel To Be Kind

UK songwriter Nick Lowe never had any need of PRs in his unsteady rise to moderate fame and (latterly) healthy fortune. In Cruel to be Kind: the Life and Music of Nick Lowe, by Will Birch (Constable, £20), one of the great unsung and humble heroes of pop music receives his first (and, due to the definitive nature of the text, quite likely only) biographical treatment. Birch rightly claims that Lowe was never an innovator but rather a supreme pop/rock stylist whose accurate echoing of numerous styles had cast him in the role of a human jukebox (albeit with much better lyrics). In official and authorised conversation with Lowe as well as a wide range of friends, colleagues and family, Birch toothcombs the man’s life and times. It is, much like Lowe’s music, rife with pleasurable detail, the occasional surprise (it is most amusing to discover that he is actually a distant relative of the inventor of the said same jukebox), and a casual but no less significant quality.

“Ozzy had a sixty-inch teleprompter with the song lyrics, and that got stolen …” Cue embarrassment and panic in Detroit, or wherever it was that the occasional Black Sabbath frontman performed. There are many more tales of performer woes in No Encore!, by Drew Fortune (Post Hill Press, $17.99), wherein over 60 musicians reveal their oddest, ker-azy, most awkward gigs. Mostly geographically landlocked in the US (over 50 of the reasonably high profile musicians are American) and pitifully gender imbalanced (six women? Seriously?), the book at least offers up a few laughs, no small level of insight regarding the dynamic between performer and audience, and how sometimes even the most precise instructions get lost in translation from the Production Office to the stage. The likes of Alice Cooper, Wayne Kramer, Paul Oakenfold, Big Daddy Kane, Wyclef Jean and Guided by Voices’ Robert Pollard talk of performance screw-ups, excessive alcohol and drug use, wardrobe malfunctions, and general stupidity. The best sad-and-sorry tale (and, indeed, the funniest) comes from Garbage singer Shirley Manson, whose story of following a huge show at London’s Wembley with a gig at a German castle in front of about 100 picnicking people is alone worth the price of this moderately amusing if (and it’s worth repeating) gender lopsided book.

There have been lengthy magazine articles focusing on a solitary song, but very rarely a book - let alone a book about an incomplete one. For this alone, The Wichita Lineman: Searching in the Sun for the World’s Greatest Unfinished Song, by Dylan Jones (Faber & Faber, £10), should receive plaudits just for the idea of it, let alone the construct. “Why?” was a regular response to Jones when he informed prospective interviewees (including the song’s writer, Jimmy Webb) of his quest to investigate and celebrate a song long since regarded as country music’s first existential work. Why not should be the rejoinder, as Jones, via deep-digging, biography, interviews, social history and travelogue, gets under the skin of exactly why - specifically as conveyed by Glen Campbell - it has attained an invincible classic status. Campbell’s delivery, says Webb, is the “perfect marriage between a song and a voice ... It still sounds as though that song and that singer were meant to be together.”

It Gets Me Home

Music fans old enough to remember the glory years (1977-1982) of New Musical Express will recall the byline of Ian Penman, a seriously articulate, stubbornly ostentatious music/culture critic who jousted with the English language so much he would simultaneously seduce you with his playfulness and make you rush to the end of an article for the payoff line. In other words, although a lover of music, Penman was so academically blinding that he dazzled you to read different critics. And yet despite his attachment to pretentiousness he remains a master of prose, as It Gets Me Home, This Curving Track (Fitzcarraldo Editions, £12.99) proves.

In a collection of seven long-form review-essays (all of which were previously published between London Review of Books and City Journal, a US-based public policy print and online magazine), Penman writes about Charlie Parker, James Brown, Frank Sinatra, John Fahey, Steely Dan, Prince. Fusing snippets of autobiography (“In the early 1970s … Are You Being Served? was as much social realism as ribald sitcom”) with nimble observations (Prince, for example, was as much a member of the “funk-soul brotherhood” as a “pale, distant siren”), it’s clear that Penman’s clever and insightful touches - although somewhat affected - remain intact.

The Art of Ghostface Killah

From old hand to young tyke - Irish critic/writer Dean Van Nguyen (a contributor to the Irish Times and other publications) delivers a sideways but nonetheless incisive glance of Wu-Tang Clan’s Ghostface Killah (Dennis Coles), whom the author regards as an artist apart in terms of “lyricism, story-telling, straight incredible rapping”. A batch of essays (across 100-plus pages) that mixes broad cultural investigations and analysis with slivers of autobiography, Iron Age: The Art of Ghostface Killah (Headstuff, €13), isn’t short on opinion. Unapologetic in his admiration for the subject (sometimes to the point of hyperbole: Killah’s recorded music, Van Nguyen writes, will “astound future generations until this planet spins off its axis and plunges into the sun”), there is more than enough considered and cogent outlines here that make up for the fandom. There is also throughout a baseline knowledge of and authority on hip-hop. Such a level of engagement provides the key to filtering out the fan from the writer. The end result may be a short-ish read, but it is more fulfilling than books twice its length that say half as much.