Robert Pinsky: ‘I don’t like the idea that poetry is marketed’ 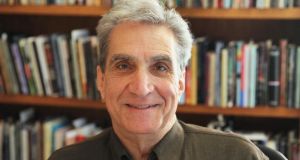 Robert Pinsky: “There is a very active vital life of poetry in the US, quite contrary to the stereotype that all Americans are vulgar yahoos who don’t care about art.” Photograph: Wendy Maeda/The Boston Globe/ Getty Images

The term “poet-in-residence” suggests a leisurely period of domicile: a year at a university, perhaps, or a season in some crumbling mansion by the sea. But when the residency takes place within the lifespan of a 10-day arts festival, the poet in question doesn’t have much time to let the grass grow beneath his or her residential feet.

At this year’s Kilkenny Arts Festival, the American poet Robert Pinsky will be giving a reading from his own work, conducting a workshop with Irish poets, launching a poetry broadsheet and orchestrating a reading of favourite poems by artists appearing at the festival. Oh, and leading an audience down into the depths of Dunmore Cave for a spooky session with his translation of Dante’s Inferno.

On the phone from his home in Cambridge, Massachusetts, the septuagenarian sounds remarkably sanguine about the prospect of a busy week in August.

“I would just as soon stay in motion,” he says. “In a way, it’s harder to get down and then back up. I guess an unflattering comparison would be the shark that keeps moving; in a mild, sweet, plump, toothless-fish way I do like to keep moving.”

A glance at his 40-year career shows that Pinsky has always done exactly that. Besides his eight volumes of poetry – from Sadness and Happiness (1975) through the book-length 1979 poem An Explanation of America to Jersey Rain (2000) and Gulf Music (2007) – he has translated Dante and Czeslaw Milosz, edited numerous anthologies and written several books of literary criticism. He also served three consecutive terms as US poet laureate, from 1997 to the year 2000. That’s besides a “day” job teaching at Boston University, and his duties as poetry editor at the online Slate magazine.

An essay in his book Singing School (2013) offers a glimpse into the nature of Pinsky’s expansive approach to poetry. “There are no rules,” it begins. “Impulses, swerves, collisions, flights, descents, gags, indirections, surprises, exploding cigars, non sequiturs: all are allowed or encouraged, and all in some sense begin to create their own principles.”

Pinsky was born in Long Branch, New Jersey – the seaside town which has produced a number of notable American wordsmiths, among them Dorothy Parker, Norman Mailer and Bruce Springsteen.

His father worked as a lens-grinder for an optician; his grandfather was “a small-time bootlegger and had a bar”.

How did he first get interested in poetry? “It started with music,” he says. “When I was in high school I was not a particularly good student. My one identity was playing the saxophone. I had fantasies of being a musician.”

When he went on to Rutgers University, such inspirational teachers as Paul Fussell and Francis Fergusson – Pinsky still regards the latter as “the most exciting American literary critic ever” – led him to the discovery that “there was actually an art like music, based on the sounds of words”.

“I wasn’t that great a musician, so it was an easy transition to make,” he says.

Jazz has always played a key role in Pinsky’s work. He often speaks of a sentence as being like a melody, and the work of a poet as “composition”.

“When I am composing a poem I’m thinking of what I would like to have been able to do with the horn,” he says. “I’m thinking, ‘Well, you put on emotion in a chorus, and then more emotion in another chorus that does it a different way’. That idea of variations that ‘go somewhere’ by deepening and complementing a theme – that has always been at the centre of my idea of the art.”

America is also central to Pinsky’s poetry; but this has been less of a deliberate artistic choice. “I’m not a scholarly person, so I didn’t consciously formulate the country as being my subject. But one thing that I felt I knew quite well was the nature of American culture – including food, film, insults, painting, the ways of enhancing or abusing the landscape. I understood all that. But I didn’t know a lot about anything else.”

He is, he adds, “a patriotic writer”. Can he explain what he means by that? “Part of the tradition of patriotism that I respect is one that I find in all the American writers that I admire,” he says. “We are aware of the ways in which we fall short of the ideal. That energy of constant critique; constantly trying to understand what a democratic society or culture would be – the ways in which we would have it, or do have it, or might have it – my heroes have always been concerned with that.

“So when I read Emily Dickinson or Ralph Ellison or Willa Cather or Mark Twain or Wallace Stevens or William Carlos Williams, I am aware of that tradition. Twain, in a way, is the epitome of it for me. Twain is constantly teasing and lamenting the country, but he had a deep and abiding commitment to it.”

Just as he is no ambassador for a jingoistic version of America, Pinsky is not keen on the label, often applied to him in popular culture, as an “ambassador for poetry”.

“Yeah. I don’t like the idea that poetry is marketed or needs an ambassador,” he says. “For me, it is not a brand of soap or a political candidate. So a lot of the official activities to do with poetry arouse a kind of snotty distaste in me.”

This is not the sort of talk we associate with that most official of personages, a poet laureate. Did Pinsky enjoy his three terms in that very public position? “I’m not particularly fond of, or an admirer of, prizes, titles, ranks and distinctions,” he confesses. “The one part of it that I am very grateful for – very proud of – is the Favourite Poem Project.”

Begun as a millennial celebration with a modest grant from the Clinton administration, the project has taken on a life of its own. It now boasts an archive of some 25,000 entries and has given birth to three anthologies plus its own website (favouritepoem.org) where videos show a range of Americans reading and commenting on their favourite poems.

A builder discussing Whitman; a Jamaican immigrant interpreting Sylvia Plath; a Cambodian-American student commenting on Langston Hughes. “In short,” says Pinsky, “those videos demonstrate a very active vital life of poetry in the United States, quite contrary to the stereotype that all Americans are vulgar yahoos who don’t care about art.”

When he brings a brief instalment of the Favourite Poem Project to Kilkenny, does he expect it to be a very different experience? “The stereotype would be that everyone in Ireland has a poem memorised. The favouritepoem.org videos reflect American culture. But Ireland, too, has immigration. Ireland too has more than one language - and the playing out of particular lives in relation to particular works of art might also be interesting in Ireland. I’ll be interested to see. I wouldn’t venture any predictions, except to say that possibly there will be surprises.”

Pinsky is very much in favour of poetry being spoken aloud – especially from memory. But he’s not a fan of the self-conscious, stylised art of recitation.

“One of the great things about poetry is you can do it all by yourself,” he says. “You can think or recite a poem while you’re taking a shower or driving in a car. Poetry is inherent and, by its nature, on a human scale. I’m not as interested as some people in amateur theatricals on honing your rhetorical skills. I think a lot of the pleasure of a poem can come from just being able to mutter it to yourself.”

Pinsky in residence: The details

POETS AT WORK This event, in partnership with Poetry Ireland, is a chance for Irish poets to hone their skills with one of the world’s most acclaimed practitioners. Participation is free and by application only, and places are limited; email info@poetryireland.ie for details. The Heritage Council, August 11th, 10am

DANTE IN THE DEPTHS Robert Pinsky reads from Dante’s Inferno in Dunmore Cave, which was famous in ancient times for being one of the three darkest places in Ireland. “I won’t have to force being sepulchral,” the poet jokes. August 12th, sold out

KILKENNY FAVOURITES Festival artists and students read their favourite poems before a live audience, and explain why they mean so much. Parade Tower, August 15th, 3pm. Free but ticketed