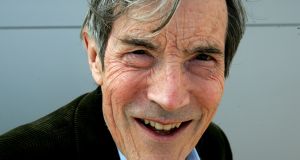 Richard Murphy, the distinguished Irish poet and member of Aosdána, has died, aged 90, at his home in Sri Lanka, where he spent part of his childhood and returned to in the latter part of his life.

The news was confirmed by his publisher, Cork University Press, which last year brought out his autobiography, The Kick: A Life Among Writers, which was first published in 2002 by Granta.

Murphy, who was born in at Milford House, near Shrule on the Mayo-Galway border, into an Anglo-Irish family, in 1927, a distant descendant of both Charles I of England and Patrick Sarsfield, devoted his life to a poetry that sought to reconcile Ireland’s and his own two traditions.

The Battle of Aughrim (1968), perhaps his most famous work, originally commissioned for radio by the BBC, had as its central theme the bridging of Ireland’s two cultures. The title poem is a long narrative about the decisive Protestant victory over Catholic forces in 1691. His ancestors had fought on opposite sides and Murphy declared, “My underlying wish was to unite my divided self, as a renegade from a family of Protestant imperialists, in our divided country in a sequence faithful to the disunity of both. The poetry was to occupy a no man’s land between music, myth and history.”

He studied at Wellington College in England but rejected it and his family’s military tradition in favour of poetry, studying English and literature at Magdelen College, Oxford, under CS Lewis. Winning the AE Memorial Award in 1951 enabled him to rent a cottage in Connemara. He established his reputation with The Last Galway Hooker, a poem inspired by his experience of buying and restoring a sailing boat of traditional design. He started a fishing and tourism business in Cleggan and in 1969 he purchased High Island where he could work in solitude.

He built a second retreat on nearby Omey Island in 1974. Among the visitors he entertained in Cleggan were Ted Hughes, Sylvia Plath and JR Ackerley. Plath tried to seduce him; Hughes later became his best friend.

The Mirror Wall (1989) was the result of a visit to Sri Lanka after an absence of 50 years. Other major works included The Price of Stone (1985). A regular broadcaster on RTÉ and the BBC, his work is included in many anthologies. He taught in many American and English universities.

At the Yeats International Summer School in 2007 he advised fellow artists, “Never mind the bum notes, keep the music going until the end.”

His childhood in Ireland was documented in The Other Irish Travellers, a BBC documentary made by his niece, Fiona Murphy, in 2012. The collection The Pleasure Ground: Poems 1952-2012 (2013) is his most recent publication.

His daughter Emily and son William survive him.