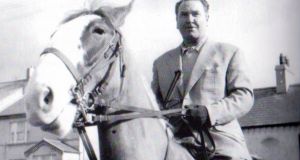 Josef Locke: in the 1950s, he became the biggest-selling UK artist with Columbia Records.

The energetic Ulster History Circle, which recognises the lives of well-known but frequently overlooked personalities, has recently unveiled blue plaques to two leading lights in Irish music whose lives are also recalled in a book. Music in Northern Ireland: Two Major Figures – Havelock Nelson and Joan Trimble (Grosvenor House Publishing, £12) by Alasdair Jamieson considers the overlapping but contrasting trajectories of the careers of both musicians.

Nelson worked in Belfast for many years, while Trimble, whose family ran the Impartial Reporter newspaper in Enniskillen, was a celebrated performer. Absorbed in music, both enjoyed high profiles and touched the lives of many people. Occasionally their paths crossed and they were aware of each other at prize-winning feisanna; at the same ceremony in 1985 they were made fellows of the Royal Irish Academy of Music.

Although born in Cork in 1917, Nelson moved with his family one month later to Sandycove, Co Dublin, where he began piano lessons at the age of five. In 1947, he took up a post with the BBC in Belfast, working initially on Children’s Hour. He spent time on country ceilidh outside broadcasts and The McCooeys, a radio saga of working-class life, before moving on to television programmes. A pianist, composer, conductor and operatic animateur, Nelson produced an extensive catalogue of compositions, and the book includes excerpts from his scores. Writing in 1982, the Irish Times critic described his recital with the Dublin-based mezzo soprano Bernadette Greevy as “a synergic relationship”.

Joan Trimble was best known as a pianist, notably in the duo with her sister Valerie, and was a distinguished composer. Born in 1915, she was musically precocious showing early promise on the violin and piano. In the 1930s her most prestigious appearances were as a guest pianist in John McCormack’s concerts. Substantial engagements in later years included accompanying her sister to play a Mozart Concerto for 2 Pianos at the Proms with Sir Adrian Boult conducting.

Passing references are made to the Trimble sisters and Havelock Nelson in the biography of Olive Smith, founder of the National Youth Orchestra of Ireland in 1970, and the subject of an absorbing account by her daughter Gillian Smith. Olive Smith: A Musical Visionary (Somerville Press, €20) is written in tandem with the development of classical music in Ireland in the second half of the 20th century.

As a music organiser working on the administrative staff of Trinity College Dublin, Smith’s role was pioneering and she was the prime mover behind the Bach Bicentenary Commemoration of 1950. Other achievements included establishing countrywide concerts – known as Country Tours – which launched the careers of many performers, as well as developing a Schools’ Recital Scheme bringing live music into classrooms in every county.

The little-celebrated work of church organists and choirmasters is recognised in A Society Formed (Ulster Society of Organists & Choirmasters, £25) by Alasdair MacLaughlin, a publication marking the group’s centenary in 2017. This meticulously researched history brings an insight into cultural life at a time of social and political change. Many remarkable personalities emerge and while the book concentrates on Ulster, the connections and friendships with the Leinster Society are explored.

One of the founder members of the Ulster Society, Dr Norman Hay, a talented orchestral conductor and organist of Bangor Abbey, once applied to be secretary of Trinity College of Music London. A delegation came from London to interview him and were puzzled by the fact that although he lived in Belfast he was organist in Bangor [20km away]. After pointing out their geographical ignorance, Dr Hay reportedly informed them that Bangor, Co Down, was “handing out world-class education hundreds of years before they were painting their backsides red, white and blue”. He did not get the job.

Aside from colourful organists, Ulster culture has also played a significant part in the dance tradition. Irish Dancing: The Festival Story (Leschenault Press, £20) by Angeline King whisks the reader on an engaging journey from ballrooms and firesides across a landscape of barn dances, harvest homes and fancy dance classes. With a wide frame of reference, her story considers numerous aspects of dancing customs and techniques, the work of the dance master, the birth and growth of the feis movement and modern music festivals.

As the author points out, Queen Elizabeth I is not a name associated with the preservation of Gaelic culture but she had terpsichorean tastes. Irish jigs were reputedly her favourite, in particular the Rinnce Fada (Longways Dance) which was then in vogue. Many other country styles developed, including clap dances, pantomime dances, marching, and cake dances. In Co Cavan, the stick dance was performed by passing a stick under the legs and arms and around the body in time to the music, in a similar fashion to boys leading bands on the Twelfth of July.

The life of one of Ireland’s most popular 20th-century singers is chronicled in Josef Locke: The People’s Tenor (Croshan Press, €15) by Nuala McAllister Hart. With his powerful voice, Locke achieved fame and in the 1950s became the biggest-selling UK artist with Columbia Records. His flight from the taxman in 1958 was the subject of a fantasy film Hear My Song but, as the author points out, this was just one incident in more than 50 years in showbusiness.

Drawing on the support of the family, the book includes previously unseen photographs and anecdotes, and explores Locke’s private and public life – not the mystique which he carefully created about himself. In 1982, he bought a bar at Burnfoot in Co Donegal where it was said that among his occasional patrons was a judge whose presence was a safeguard against his being charged for after-hours drinking. His son, Karl, then a student in Belfast, helped out behind the bar. He recalls his father providing him with a car and paying its running costs but there was a catch – namely that when Karl was coming across the border on his weekend visits, he should bring with him under wraps a few bottles of whiskey, which was cheaper in Northern Ireland than in the Republic.

For many musicians, Ireland without harps would be unimaginable and the instrument has a rich heritage. The Egan Irish Harps: Tradition, Patrons and Players (Four Courts Press, €45) by Nancy Hurrell, tells the compelling story of John Egan, the leading self-taught harp maker in Dublin in the early 19th century. Egan invented a modernised harp for Ireland, called the Portable Irish Harp, the forerunner of the modern Irish harp. It became popular with many musicians including Thomas Moore and Sydney Owenson, as well as Lady Alicia Parsons of Birr Castle, Princess Augusta at Windsor Castle, and Patrick Byrne, known as “the last blind harper”.

The singer and actor Richard Hayward, well-known in the middle decades of the 20th century, played an Egan Portable Irish Harp and wrote about it in The Story of the Irish Harp published in 1954. One unfortunate instance of the harp’s fragility is recounted in Hurrell’s book. When Hayward brought the strings up to tension, the harp simply collapsed “due to woodworm and neglect”. It was later rebuilt with a new soundbox, brought back to life and he toured the country playing his restored instrument in a programme devoted to the history of the Irish harp.

A fascinating study of the Egan harps, the book comes with an exquisite 16-page colour inset of 44 plates featuring a range of the instruments alluringly displayed – some with winged-maidens or Grecian figures playing lyres – in museum collections in Ireland, Britain, Europe and America.