Paulina and Fran, by Rachel B Glaser: a cracking debut novel

A razor-sharp tale of female relationships and an astute, witty portrayal of New England art school graduates coming of age 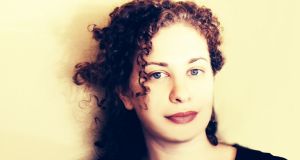 Rachel B Glaser: she brings a scalpel to her story of creative women looking to find their feet in modern America

Getting new fiction off to a new year is a cracking debut novel from a talented young American writer. Rachel B Glaser’s Paulina and Fran is an astute and witty portrayal of a bunch of New England art school graduates coming of age. Techno parties, dance-offs, seductions, no-strings sex, superthrift shopping and the dreaded “crit” all form part of an intense world of female friendship that is reminiscent of the cut-throat satire of Miranda July and Sheila Heti.

Setting the first half of her novel in a prestigious art school on Rhode Island, Glaser creates an insular society caught up in its own, mostly superficial, preoccupations: “People moved to the college and their families forgot about them. Snowflakes died on their faces. They endured the human struggle.”

Although the narrative switches easily between the voices of a number of characters – traumatised Sadie, perplexed Julian, exhausted Renaldo – the focus is on the eponymous heroines and the all-consuming relationship that develops between them.

Paulina is a smart-talking girl who spends her time meticulously crafting a bad reputation centred around public sex acts, stealing lovers and manipulating friends. Intelligent, bisexual, “a wrecking ball”, she is the kind of a person who can charm a registrar into dropping her incompletes. With “a stubborn need to star in someone’s life”, Paulina is someone you don’t want as an enemy.

Fran, meanwhile, is someone you want as a friend. Lovely and listless, her artistic spirit longs for adventure and success. Drawn to each other at a party, the curly-haired duo cement their friendship on a trip to Norway. Back on campus, the young women yearn for each other, both sexually and fraternally, and the ensuing rollercoaster relationship is sharply excavated by Glaser.

The desire turns toxic when Paulina’s discarded ex, Julian, enters the picture. Unable to pin down her feelings for Paulina, Fran instead chooses Julian, making a vicious enemy in the process. “I was only friends with you as a novelty,” Paulina tells Fran. “How a child picks an ant from a pile of ants and makes it their pet for the afternoon.” The quips are rife throughout the novel, with Glaser’s colourful, clipped sentences showing how quickly tenderness can turn bitter.

In the claustrophobic art school world, the students’ relationships define their self-worth. Everyone, appropriately for the milieu, is looking to be seen, admired and appreciated. Even Paulina, for all her narcissism, finds her moods dependent on how others view her. When her sometimes friends Sadie and Allison ignore her in a thrift shop, Paulina’s vibrancy fails her. The highs and lows are hilariously recounted: “Her hair had looked ideal when she left for superthrift, but all order had been destroyed by the wind. Her life felt like a mistake. She looked and felt like a shipwrecked alien whose mission had gotten horribly derailed.”

Packed with original one-liners – “It takes a lobotomy to be friends with her”; “You sound like a malfunctioning hair dryer” – Glaser’s style is comparable the Virginian writer Nell Zink, whose debut novels Mislaid and The Wallcreeper were published to acclaim last year.

It is the type of humour that characterised Lena Dunham’s biting voice in the early seasons of Girls. There are also echoes of Greta Gerwig’s beguiling and kooky heroines in the films of Noah Baumbach.

Glaser brings a scalpel to her story of creative women looking to find their feet in modern America. From Massachusetts, she has previously published a book of poems and a collection of stories.

In 2013 she received the McSweeney’s Amanda Davis Fiction Award, and her work has appeared in the anthologies 30 Under 30 and New American Stories.

Glaser has a background in art and her knowledge of the industry shines. From the emphasis the students place on aesthetics in their work, clothing, friendships, lovers, to the rivalries between different factions – “Graphic designers weren’t real artists, she thought. They just made signs” – the author nails a world of performance and role play, a competitive and cut-throat environment where desire, ambition and esteem are intertwined.

The book is equally convincing when it shifts to the real world as the graduates struggle to forge careers. While Paulina hits the jackpot with a product for curly hair, Fran’s move to upstate New York is less successful: “At school she’d seen herself as special, but in the weeks since graduation the world had slowed and now it was clear that everyone was as insignificant as the scrappy backyards one passes on trains.”

Paulina, despite her partying ways and good fortune, is equally lonely in Brooklyn: “She stepped onto every train with grace, thinking Fran would be watching.” For all the wisecracks, this emerges as the novel’s central message: the need to be watched by someone who loves us, to be noticed by those we love.