Patriotic geek who blew the whistle on the NSA 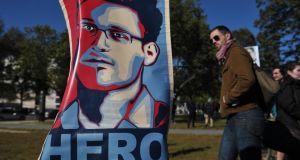 Friend or foe?: a banner of Edward Snowden during a protest in Washington. Photograph: Mandel Ngan/AFP/Getty

On December 3rd last year the editor of the Guardian newspaper, Alan Rusbridger, was questioned by the House of Commons select committee on home affairs. Its chairman, Keith Vaz, perhaps hoping to start Rusbridger off on an easy one, asked if he loved his country. It was an odd, and oddly un-British, question, and Rusbridger, frequently described as unflappable, admitted to surprise before declaring that, yes, he and his journalists saw themselves as patriots.

Rusbridger’s paper was at the heart of the biggest story of 2013: the revelation by the former US National Security Agency contractor Edward Snowden of mass collection of communications data by the agency and its British partner GCHQ.

The raising of patriotism seemed incongruous to many watching Rusbridger and the committee, but patriotism is at the heart of the Snowden tale, outlined in this new book by the Guardian journalist Luke Harding.

Snowden believes in the United States in a way many Europeans don’t understand. The picture that emerges of the 30-year-old computer-security expert, who pulled off the biggest intelligence leak in history, is of a young man who sees the American constitution as a sacred text and belives the US should be a beacon of liberty for the world. It’s his tragedy that this fervour has led to him languishing in Moscow, trapped by the grace of Vladimir Putin and his security agency, the FSB.

What exactly did Snowden do? The first third of Harding’s book swiftly takes us through the events that made Snowden the “most wanted man in the world”.

Snowden grew up “under the giant shadow of one government agency in particular”: the NSA. His mother’s house in Maryland was a 15-minute drive from the agency’s 400-hectare complex at Fort Meade. But Snowden had no particular dream of joining the agency. As a young man he was not the kind of person the agency went for. Illness and family break-up had thwarted his secondary education, and university was a distant dream. He instead enrolled at a community college, studying computing. After the US invasion of Iraq he attempted to join the army, but he was physically unsuited. Eventually he found an information-technology job at the University of Maryland. Through its links he gradually found himself an employee of the secret services.

Though he enjoyed the work, with its good pay and excellent opportunities for travel, Snowden found himself increasingly disturbed by the NSA’s powers of surveillance and the amount of information about individuals’ communications it could access. The US constitution’s fourth amendment is clear: “The right of the people to be secure in their persons, houses, papers, and effects, against unreasonable searches and seizures, shall not be violated . . . ” Snowden, a libertarian who had donated to the political campaigns of Ron Paul, could not square this with what he knew of the NSA’s capabilities.


Glenn Greenwald
In late 2012, and by this time living in Honolulu and contracting for the National Security Agency, Snowden attempted to establish secure contact with Glenn Greenwald, a combative Guardian columnist and campaigner who Snowden felt would be sympathetic. That didn’t quite work – the “technically illiterate” Greenwald didn’t get around to installing the encryption Snowden felt was necessary to make communications safe – so Snowden tried a different approach. In January 2013 he emailed Laura Poitras, a film-maker: “I am a senior member of the intelligence community. This won’t be a waste of your time . . .”

This is the point where Harding’s account turns into a thriller. There are few things journalists like more than writing about journalism (or reading about it, for that matter), and Harding’s account of how the leaks came to be published is thrilling, full of intrigue, last-minute flights, secret meetings and heroic hacks and editors. Snowden insisted Greenwald was the man for the story. Janine Gibson, editor of the Guardian ’s US outlet, seconded the veteran correspondent Ewen MacAskill to work with Greenwald, Poitras and their mysterious source, perhaps keen to have a long-time Guardian man on the story should relationships sour with Greenwald and Poitras.

In late May, having copied thousands of documents about the NSA’s surveillance programme, Snowden fled Hawaii for Hong Kong. There he met the trio of journalists, who had been enticed by some tasters Snowden had given Greenwald. The quartet worked obsessively on the material, teasing out stories from the myriad documents. They stayed offline in an attempt to avoid surveillance. Eventually, the first story was sent to the New York office; Gibson contacted the authorities to tell them of her intention to publish, keen to ensure that the Guardian , a newcomer in the US, was seen to be acting responsibly. Although the White House was unhappy, it could not give Gibson sufficient reason not to publish the first of a stream of surveillance stories, all stemming from Snowden’s leaks.

The impact was astonishing. Shortly afterwards, Snowden revealed his identity, in a video that is the most viewed piece of journalism on the Guardian website. The US government was angry. Snowden was scared, and convinced he would have to seek asylum. At this point Julian Assange, the Wikileaks founder, who had so far not been part of events, somehow inserted himself into the story. From the Ecuadorian embassy in London, where he is trapped after trying to flee extradition to Sweden, Assange contacted the young whistleblower with an apparent promise of asylum in Ecuador itself. The plan didn’t quite work out, and Snowden is now in Moscow, with “temporary asylum” status.

This uncomfortable fact makes it easy for defenders of the security status quo to attack Snowden. As Harding points out, the FSB almost certainly has its hooks in Snowden to a greater or lesser degree. This incongruity was compounded by Snowden’s listing of Russia as being among the first countries to “stand against human rights violations carried out by the powerful against the powerless”. But there is a sense among a certain type of web libertarian, perhaps including Snowden, that the United States, being the greatest superpower, is the only one truly capable of moral (and immoral) action. It’s an odd form of American exceptionalism that can excuse the violations of other regimes. Harding leaves no doubt that Moscow, China and other powers are involved in surveillance every bit as insidious as the US and British programmes.


Accused of treason
Back in London, having published secrets about Britain’s surveillance system, the Guardian ’s editor and staff feel beleaguered. Their stories have led to promises of change from Barack Obama, but in Britain the Establishment has backed the spooks, and the Guardian stands accused of treason. As Rusbridger has repeatedly pointed out, Britain’s lack of a constitutional guarantee of the right to free speech leaves the paper vulnerable. Although the US authorities are pursuing Snowden, they have made it clear that journalists at the US Guardian and other outlets that covered the story are safe under the US constitution. Guardian journalists could at times be almost as evangelical about the US constitution as Snowden himself.

Meanwhile, UK anti-terrorism legislation has been used to search Greenwald’s partner, David Miranda, and, bizarrely, GCHQ agents forced the Guardian to destroy hard drives containing some of the Snowden documents, in spite of knowing there were copies in the US.

Harding’s book is, as is often said of journalism, a first draft of history. As a minor criticism, it sometimes reads rather like a first draft, with minor errors and digressions. (The US web-freedom campaign the Electronic Frontier Foundation finds itself renamed the Electronic Freedom Forum at one point.) But it is a vital account of the story of the decade and the issue of our age: when our lives are lived on wires, how safe are we from those who would use our private information against us, whether criminals, foreign agents or our own governments?