On writing Gold by Geraldine Mills 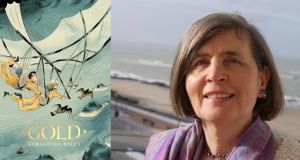 Geraldine Mills: Living on the edge of Connemara, I am acutely aware of the gift of landscape around me. The world that the twins, Starn and Esper, are born into has suffered the devastating effects of multiple volcanic eruptions. In the absence of insects and birds they have to use the laborious task of hand-pollination to create a single apple

Every year, farmers burn the mountain beyond our house in order to clear it of gorse. From our window we stand and watch flames licking everything in their path. One spring it raged completely out of control and the whole mountain was ablaze, burning up the night. When we walked those hills months later it looked like that little part of our world had been involved in some cataclysmic event. The ground was black, charred tree stumps lifted up their dead arms to the sky, everywhere soot and ash. Looking across to Lough Corrib, I could see its islands vividly green in the distance.

I was a writer in search of a theme, having just published my third short story collection, Hellkite, with Arlen House. On those numerous walks through the stripped hills, the scorched trees kept troubling me. “What if” started sitting on my shoulder and showing me how easily our fragile ecosystems can be damaged. I tried to imagine the outcome if something more powerful hit us, something even more calamitous than the volcanic eruptions of Iceland that, in 2010, had forced our skies silent.

I had an abandoned children’s novel from about 10 years previously. I played over and over again the possible scenario of taking the two boys in search of adventure from that unpublished story and time-travelling them into the future imaginary world of no trees or animals. When I got the image of the twins in pollination suits the plot began to take wings.

Living on the edge of Connemara, I am acutely aware of the gift of landscape around me. The world that the twins, Starn and Esper, are born into has suffered the devastating effects of multiple volcanic eruptions. As a result, very little grows in the Orchard territory, which once produced wonderful fruit; now in the absence of insects and birds they have to use the laborious task of hand-pollination to create a single apple.

When the boys discover a map in a sealed room in their apartment, which tells of gold on one of the forbidden islands, they decide to go in search of it. Since they have no obvious means of transport, they have to be inventive. Developing a glider, they leave their father, take off on their quest and on the way have to surmount numerous obstacles before they finally get their hands on the treasure.

The world of Gold is a world of two halves, which go from dark to light. In its writing it demanded separate rules: one for the familiar grey home of the boys that was new to me, and the unfamiliar vibrant colour and nature of the islands that was new to the boys.

There was great fun building these worlds. In the first one, “what if” was in its element inventing the different vocabulary that I needed to be unique to “Orchard”. While in-depth research was not called for, there were certain elements that demanded sufficient thought in order for them to be plausible; for example I needed to know foods that depend on insect pollination as opposed to those that can be fertilised by wind. In the absence of trees I had to find a way for the inhabitants to be able to have a constant source of oxygen. This is where I gave a job to the giant gunnera plant that is overtaking the west of Ireland. Since it is almost impossible to eradicate, there is every possibility that it would survive such a catastrophe and so it was given a supporting role here.

Finding names for all the characters meant scouring mythology, astronomy and long lists of film credits to find the most apt ones. E-pistle is the name I gave to the boys’ hand-held computer which was a way of merging the old with the new.

In the second part of the book, “Islands”, the boys have no vocabulary for the simplest of flora as it is unknown territory to them; plants such as nettles or briars have to be renamed by Starn, who calls them stingers and spikers. To make the islands as believable as possible I visited a cave, a wolf sanctuary and went on a balloon ride over Albuquerque so I could describe it for the climax of the book.

And so my boys, Starn and Esper, whose lives I tracked for the bones of two years, had reached the end of their quest and were ready to return home with their treasure. It was now up to me to go off in search of a publisher. How very fortunate I was that Little Island saw the story I was trying to tell and accepted it for publication.

Geraldine Mills is a poet and short story writer. She lives in Rosscahill, Co Galway, with her husband Peter. Gold, her first novel for children, is published by Little Island and is now available from all good bookshops. Visit www.littleisland.ie for more information or to buy online