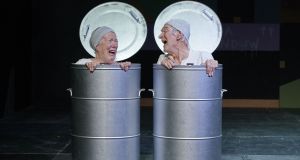 First performed in 1957, the follow-up to what is arguably Samuel Beckett’s best-known play, Waiting for Godot, Endgame follows in the same vein, offering us an absurdist tragi-comedy. There are some notable similarities between the two; we have two main characters, Hamm and Clov, a desperate yet hilarious double-act, suspended in the act of time biding. We also have two secondary characters, Nagg and Nell, once young, full of shared memories, and still, in their way, in love, in spite of living side by side in bins filled with sand, and in spite of Nell being, apparently, dead already.

To write this column, I sat myself down in a busy cafe in London, and opened up my old, tattered Faber edition from 1958. I thought I might find it hard to reconnect with the work under such circumstances, but reading the very first page, I burst out laughing. By the time I was into the guts of the play, I had, yet again, the feeling of reading something so starkly true that it was as though someone had reached in and taken firm hold of my bones. But then, that’s Beckett, I suppose.

Philip Toynbee in the Observer said of Endgame: “Most of us have paid involuntary visits to hell, and this is what it looks and feels like.” But what Beckett depicts in Endgame isn’t some visited hell, but where we exist perpetually. It’s life, distilled to its nth degree. The characters search for meaning, indulge in memories, observe change, wait for death. They’re filling time, however reluctantly. By now, even language has deserted them – there are only a few words left, and they, through overuse, are failing.

They’re trapped by their loyalties to one another; their crippling inertia is sustained through habit. They play it out and, in showing them to us, Beckett, with his usual caustic humour, reveals the essence of our own existence, reminding us that we too are, forever, just playing it out:

“Old endgame lost of old, play and lose and have done with losing.”