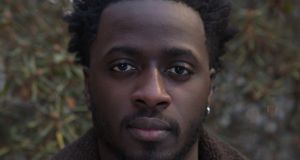 Nana Kwame Adjei-Brenyah: a remarkable new voice on issues of race in America

An epigraph from Kendrick Lamar, virtual reality games for racists, genetically engineered children and a world where a white man can take a chainsaw to black children for loitering. Friday Black is a bracing and ultramodern debut collection from a New York writer, Nana Kwame Adjei-Brenyah, hailed by everyone from George Saunders to Roxane Gay as a remarkable new voice on issues of race in America.

Many stories in the collection have an imaginative prescience that both entertains and calls out injustice in a deeply disturbing manner. In one of the strongest opening stories of any recent contemporary collection, The Finkelstein 5, the author tackles the prejudice of the US justice system. Inspired by the murder of Trayvon Martin, the story begins with its sharp, stressed narrator Emmanuel trying to tone down his levels of “blackness” after a court acquits a white man for butchering five black children. “The prosecution has tried to beat you over the head with scary words like ‘law’ and ‘murder’ and ‘sociopath,’” defence lawyers tell the jury, in arch scenes that are expertly spliced with the revenge killings taking place around the city. In Adjei-Brenyah’s vividly brutal world, vigilante justice is a logical response, the consequences of which also get interrogated by the author.

Themes of injustice and inequality are the lifeblood of the collection. A flash-fiction sized ode to the narrator’s mother, Things My Mother Said, details her efforts to put food on the table when he was growing up. The highly original Lark Street sees two tiny foetuses, Jackie Gunner and Jamie Lou, come back to reckon with their father who chose, along with his girlfriend, to abort them: “‘Well, say something, Dad.’ He said Dad the way some people say c**t.” Amid the grotesque imagery of the bloody foetuses, and their anger at having their lives curtailed, the ordeal of the young couple getting the abortion comes through: “How we were quietly connected, as close as we had ever been, as we averted our eyes from those of the strangers around us.” It is a surreal and moving story without villains where the man is held as accountable as the woman. Though the premise is gruesome, there are plenty of acerbic lines and putdowns that offer relief.

Adjei-Brenyah has a sharp, dark sense of humour, reminiscent of contemporary writers like Diane Cook and Samantha Hunt. In his subject matter, the collection recalls JM Holmes’ recent How Are You Going to Save Yourself? though Adjei-Brenyah moves his young characters away from ordinary, everyday racism into hyperreal situations where extreme brutality has become mundane.

In Zimmer Land, a black man works at the titular theme park where white people and their children are allowed to shoot him in a virtual simulation: “It was better for me to get fake blasted 10 or 20 million times a day than for an actual kid to get murdered out of the world forever.”

In the violent closing story Through the Flash, Ama is a mass murderer with superhuman strength who’s trying to mend her ways by volunteering at an old folks’ home and protecting her brother from the evils of her former protégé Carl. In this and other stories – most notably the whipsmart post-apocalyptic The Era – the author blends the domestic with the horrific to arresting effect. “‘Morning, ginger root,’” says Ama’s father. “Then he turns to me, and he’s holding the knife he uses to cut meat. “‘Daddy,’” I say. Then he slashes at me with the butcher knife.’”

In Friday Black, the moral decay and chaos stemming from America’s consumer culture is hammered home through the eyes of a shopping mall’s revered, top-selling assistant: “A woman climbed the denim wall looking for a second pair her size. She was screaming and rocking the wooden cubby wall so hard that the whole thing almost fell on Duo and everybody in his section. Duo poked her off the wall with his reach. She fell on her neck. Another woman snatched the SkinnyStretches from her dead hands.”

A later story, How to Sell a Jacket as Told by IceKing, brings us back to the mall as the top seller loses his throne, his arch perspective marking the difference between white and black customers: “When they mean me, they say, ‘the tall one’, if they’re white. If they’re black, they say, ‘the black guy’”. The following story In Retail returns to a more futuristic tone that doesn’t quite work with the traumatic subject matter of a colleague’s suicide. The cohesion of early stories gets lost at times with tighter thematic development and more unified endings needed in stories like The Lion and the Spider and Light Spitter.

These issues do not, however, detract from the force of Friday Black as a whole. Inventive and resourceful, the collection’s characters are pushed to their very limits by an author pulsing with the injustices of a divided world.