Future Politics: Living Together in a World Transformed by Tech review 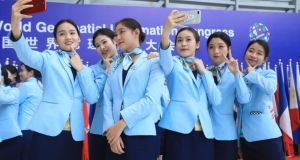 Volunteers take selfies after the UN World Geospatial Information Congress in China: “algorithms will increasingly be used to determine the distribution of important social goods, including work, loans, housing and insurance”. Photograph: Zhejiang Daily/VCG via Getty

Book Title:
Future Politics: Living Together in a World Transformed by Tech

The appointment of former Liberal Democrat leader and deputy prime minister, Nick Clegg, to a senior position in Facebook prompted a wide array of responses. Some condemned him for seeking work and wealth as his homeland grapples with Brexit.

Paddy Ashdown adopted a different approach, arguing that “my good friend Nick Clegg’s reputation as a powerful voice for liberalism and democracy will now depend on his ability to persuade Facebook to be a global campaigner for the same values”.

As Clegg begins his journeys as an advocate, his travel time would be well-used by reading Future Politics: Living Together in a World Transformed by Tech.

The father and brother of the author collaborated on an earlier book on the impact of technology on work, The Future of the Professions. This Susskind now gazes into the panorama of how societies will be governed in a world transformed by artificial intelligence and robotics.

His vision is guided by the insight that “how we govern, store, analyse, and communicate our information is closely related to how we organise our politics”.

Politics is defined as “how we order and bind our collective life”. These efforts are now being transformed by technologies that are becoming more capable.

The pervasiveness and connectivity of technology is leading to the gradual creation of a digital lifeworld, where increasingly autonomous, digital systems coexist with human abilities.

This concept is evident in our daily lives. No longer can we blithely dismiss this as the realm of science fiction, as the comfort of speculation.

Cisco Systems, a leading computing company, estimated that 99 per cent of all physical objects will eventually be connected to a network. The arrival of a driverless bus at the Dublin Quays shows that the future has arrived.

The gnawing attractions of a mobile device, as opposed to the occasional demands of actual human company, demonstrate the pervasive pre-tremors of this digital lifeworld.

However, the author notes that the relative newness of this world should not distract us from familiar challenges. The digital lifeworld is “thick with power and drenched with politics”.

Susskind challenges us to perceive digital code as law, as a new architecture of society. He argues that social engineering and software engineering will be increasingly hard to differentiate.

This is because “algorithms will increasingly be used to determine the distribution of important social goods, including work, loans, housing and insurance”. Coding will organise economic and social activity.

The conclusion is sweeping – “distribution and recognition are the substance of social justice, and in the future they’ll increasingly be entrusted to code”.

This possibility of change will not just change the power of companies which wield this influence. It will change the role of the state. It will create a “supercharged state”, where the predictive and surveillance powers of government will significantly change.

The tone of this book is as refreshing as the originality of insight. Susskind contends that “that there are causes for both optimism and pessimism, but what the future requires above all is vigilance”.

This approach, alone, commends this book to any reader eager to understand the new reckoning between technology, the state and the individual.

Digital advances have transformed our ability to communicate with each other – they have made the world as small as the brush of a finger on a touch pad or screen. Life expectancy, our reach into the cosmos and our mining of the near-infinite depths of what constitutes matter will all be transformed by technology.

Technologies such as gene editing and quantum computing could literally transform the familiar. We should be optimistic about our shared prospects.

However, we can only be optimistic if the prospects are genuinely shared. New frameworks, such as now exist around personal data, must be developed in other spheres where the collective might of technology meets individual rights.

This book excels in suggesting such approaches. New concepts are offered, including direct democracy, deliberative democracy and data democracy.

If the industrial revolution of the 18th century changed political participation then we should not be surprised if this wave of technological change has a similar impact.

This book concludes with an apposite quote from political philosopher Max Weber. He wrote, in 1919, that the task of politics is to “look at the realities of life with an unsparing gaze, to bear these realities and be a match for them inwardly”.

Some argue that it is too late. That our road to serfdom, at the mercy of the grind of technology, is inevitable. I profoundly disagree. However, to be a match for these realities, as Weber demands, requires new philosophies. Any citizen eager to be part of that debate should read this book.
Paschal Donohoe is the Minister for Finance, Public Expenditure and Reform