Neil Hegarty: How I went about painting my new novel

A Caravaggio exhibition, gentrification and the improbability of the art world planted a seed that became The Jewel 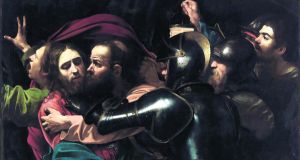 The Taking of Christ (1602) by Caravaggio. Courtesy of the National Gallery of Ireland

In his preface to The Spoils of Poynton, Henry James describes the first glimpse and glimmer of a novel. Christmas Eve, brown London fog: and his neighbour at the dinner table has introduced what James at once recognises as the “virus of suggestion” to the conversation – that blink of an eye in which a book is conceived. “There had been but 10 words,” remembered James, but this was ample: he listened to a brief tale of family discord, and he had his book.

Any novelist will, I think, understand this image: this moment, this “merest grain”. For me it came in the course of a mundane journey back to Dublin after a weekend spent in Derry. I was reading in the newspaper a review of the Beyond Caravaggio exhibition that had just opened at the National Gallery in London. A galaxy of Caravaggios gathered together for the first time, the review said, along with a supporting cast of other priceless works of art; the exhibition was coming next to Dublin, and then to Washington DC.

I read with some attention. I’d visited the National Gallery of Ireland many times to look at The Taking of Christ – the work of Caravaggio so spectacularly identified hanging on a Dublin wall in 1990, and held safely in the gallery ever since. Now, as I read about this exhibition, I speculated about security: what would happen should one of these priceless paintings be stolen?

And just in that moment, my heart began to beat a little more strongly, and a novel – its beginning, its end, its approximate outline if not all of its substance – formed itself in my mind. A loved and famous painting, stolen; its existence bound up with the fate of a series of characters – three characters – whose lives are separate in time and space, who are searching for a sense of identity and of belonging, whose destinies are tangled with this single, remarkable painting. And there it was: the glimpse and glimmer of The Jewel.

The idea of focusing upon a painting held a particular resonance. I’ve always been moved by the power of objects – those that figure in our everyday lives, just as much as the pieces treasured in our galleries and museums – to be filled with silent potency, authority, remembrance: object lessons of relevance to us all. But why a painting in particular? For some years I lived close to the National Gallery of Ireland, and I developed the habit of cutting through the building – in at Merrion Square, out at Clare Street – and stopping to take in a painting here, a painting there. These objects, these paintings: they exist for all of us; they are for the most part free to view in our State and municipal galleries (we own them, after all); and we don’t need special training to look at them, to take pleasure in them. They ask to speak to us, and all we have to do is listen.

As for my specific imagined painting, the heart of The Jewel: its form was relatively unresolved – but that was essentially the point, because it felt important to have the reader imagine it for themselves, to create their own vision. I decided it should be a Victorian piece, created by an artist largely disregarded in her own day, and essentially forgotten before coming into vogue. It would be a piece on cloth, painted in the last months of her life and designed to be buried with her – and later removed from her tomb by avaricious descendants and sold to the highest bidder.

Later, on a visit to Rome, I stood in the church of Santa Maria del Popolo, where a pair of Caravaggios hang in a side chapel – and the shape of this imagined painting consolidated itself a little more. It would consist of glowing light poised against profound shadows and darkness: a glance at Caravaggio’s chiaroscuro. I named the painting The Jewel, for these lights set against the dark, and especially for the malachite shining green at the painting’s centre. Other than that, the painting would be in the possession of the reader’s imagination.

Other influences asserted themselves. During the writing of The Secret History of Our Streets, my social history of London, I had spent much time wandering through various districts of that city, researching the postwar housing clearances in Deptford – well-intentioned but sometimes devastating exercises in social engineering – and observing the effects of gentrification in Camberwell, of upward (and downward) mobility. As the novel grew, these districts formed part of its narrative panorama, as a young artist attempts to forge a life in an endlessly morphing city.

Narrative events also played out against a context of Ireland in the 1970s and 1980s: a small town where a schoolgirl witnesses a calamity; a house in Dublin suburbia in which a boy’s pain plays out daily, leading in later life to a relationship to which gaslighting lends a hellish illumination.

These disparate characters each nurse fractures inflicted at critical moments – and struggle to trust, to love, to judge correctly, to regain the momentum that once might have been taken for granted. Three lives beginning stealthily to converge, as the novel explores what it takes to attain, or recover, a sense of security, to rebuild what the poet Ursula Bethell calls “our small, fond human enclosures” – and the cost exacted, sometimes, by this process of instilling and introducing a sense of new meaning into life.

I took time to consider some practicalities – in particular thefts and heists, how common or improbable they were. Happily, five minutes online showed me that in the art world, there is no such word as “improbable”; the improbable happens every day. Paintings are improbably valued, they change hands for improbable sums of money; this is a world on speed.

Best of all, from my point of view, improbable thefts happen frequently. Robbers arrive dressed as cops at the doors of a Boston gallery after midnight: they are admitted, and proceed to tie up the guards and spend the night leisurely packing up a priceless collection of old masters, which are removed and never seen again. Another thief in a yellow hi-vis jacket strolls in to a Berlin gallery in broad daylight, plucks a priceless painting off the wall and leaves with it under his arm. Pieces are stolen to order continually: so no, when it comes to the art world, there are absolutely no limits on improbability.

Belonging: this is one of the great themes of our times. In The Jewel, this ideal becomes tainted – and lives are lived against a background in which fractures remain neglected and unhealed. Characters create counterfeit art and build counterfeit lives and relationships that function as forgeries, simulacra for the real thing, and they tell themselves stories that are demonstrably untrue. In bringing these disparate lives together around not language but an image, I wanted to explore how such fractures can heal, sometimes, by means of a change in perspective. Versions of life can be stripped away to reveal real lives – and far from being forgotten or being a toxic force, history can be reclaimed, sometimes, to bring understanding and healing in the here and now.
The Jewel by Neil Hegarty is published by Head of Zeus on October 3rd