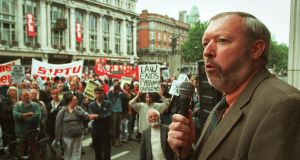 Mick O’Reilly of ATGWU speaks during a demonstration in Dublin against political corruption in July 2000. Photograph: Frank Miller

Writing my memoir began with a phone call.

After retiring from the trade union in 2008, I received a call from Francy Devine to do a customary long interview for the Labour History Magazine. We started it – it was just an interview – but it never concluded. Francy suggested that I make a longer version and produce it as a pamphlet about my situation and what happened to me in the trade union movement.

To complete the work, I got in touch with Anthony Ó Cathasaigh, a historian who has done a lot of research on James Connolly. For about two years we would meet once a week and he would pose me the odd question, but I worked on gathering the material myself. I recorded my recollections on a dictaphone, which is a habit I have always had. I am more of an orator than a writer.

I also took a course on writing a memoir in the People’s College. There, I was told not to write too rationally and not to structure my writing in the same way as a report, because I’ve done lots of those. Looking back, I would say I suffered from reports after 40 years working in the trade union movement, something I had to unlearn during the writing process.

After two years of recording, writing and editing, this work went on to become my memoir, From Lucifer to Lazarus: A Life on the Left, published by The Lilliput Press.

I rarely hear working-class voices and the stories of their lives, which are largely ignored. My goal became the representation of those voices by writing about my work, my comrades in the trade union movement, the communist movement and the Left. I wanted to give them a voice, give myself a voice, and to try to explain that time in my life, the 1960s and 1970s and after, to myself, to my grandchildren and to those who had worked with me.

However, writing a memoir is difficult and you quickly learn that memory is flawed. Perspective and time can take a toll on memory and you can only try your best to be as accurate and precise as you can when recalling the past. When you go back and check things with people, you find yourself in arguments about events. We have different recollections of them, and there’s nothing unusual about that.

The important thing is not simply the record of the events but the analysis. People are interested in the why of things and I tried to get into what the motivation was, and is, for the people who are active in socialist politics and trade unionism. You don’t run a big movement without ideas and sometimes these ideas are subconscious; people hold them and follow them, but they don’t exactly know why. They never stop to analyse them. The trick is to understand the ideas you follow and why they appeal to you.

Writing has also been a rewarding process. It’s fantastic to revisit the past without the immediacy and terror of some of the things that you faced, to just relax and savour them. Writing gave me that time to reflect. I think that it is the readers’ job to make of it what they will. They’ll draw their own conclusions. But there is one thing I hope has been captured in the work – to say to people that the most important thing in life is to try to be brave, to try to have courage and follow what you believe in. A lot of people will tell you that it’s often not a good career move, but I found it to be rewarding.