Food: The one subject that transcends barriers and borders 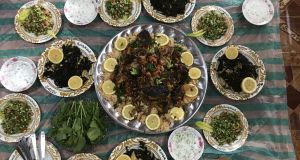 The last thing I want after a long shift is to hear restaurant chatter. The kitchen porters are still going, the pastry chefs are up until 3am, so if you want any sleep you leave them at it. I don’t need the constant ping of the internal Kai WhatsApp group to keep me awake, so if I’m not working at night, my phone stays off.

It means there are always phone messages waiting for me in the morning. But nothing compared to the ones on March 15th. Twitter, emails and Instagram lit up. I was barely awake, but notifications from around Ireland and my home country of New Zealand were arriving in a constant flow.

“Jess, we are ok. The country is in lockdown.”
“We don’t know who the gunman is or how many there are.”
“Jess I hope your family are ok.”
“Jess, what island is your family from?”
“OMG I’ve just seen the horrific news in NZ. Jess I’m so sorry.”

The terrorist attack which killed 50 people in Christchurch was just as shocking to New Zealanders as it would be if someone went on a rampage in Galway, the place I’ve called home for 14 years now. Parents, children and refugees, people I’ve been fortunate enough to work with in kitchens across Ireland, were all targeted because another white man was frothing with the dark current of hatred and fear seeping from the internet.

After working with UNHCR, the UN Refugee Agency, on the 2018 Refugee Food Festival, I’d already agreed to travel to Lebanon and Jordan to meet with refugees and document some of the food heritage that risks being lost after eight years of war. Now I was more determined to go than ever. If someone could justify killing my fellow Kiwis, couldn’t they do it in Ireland as well?

All I know is cooking, which mightn’t make me the best person possible to tell you any of this. My Maori, never mind my jumbled vowels, aren’t much use when travelling in the Middle East. Luckily, you don’t have to speak the same language to talk about food. And Syrians love talking about food.

Time and again, people’s eyes lit up when they began thinking of home and the smells of their kitchens. In a community centre in Beirut, women giddily poured ghee over makloubeh, a sort of upside down eggplant and rice dish. In Amman, they cackled when comparing the recipes of sfiha Baalbakiye, little lamb pies, with those made by their mothers-in-law. Conversation was unavoidable as sleeves of unleavened bread, doubling as napkin and utensil, were passed around in a merry-go-round of chatter interspersed by groans of delight.

In Azraq, a refugee camp in Jordan about half the size of Galway, the family of Um Haya and Abu Haya had made a small but tidy home in a metal panelled shelter. A solitary bulb lit up a windowless kitchen where they’d saved up for an oven that was on the third or fourth iteration of its life.

Chicken was boiled, then grilled after being basted in a blend of pungent spices. The water left over was poured into the rice, which began bubbling until they could stick a spoon upright to tell them it was done. Yoghurt and tabbouleh, that zesty salad of parsley and mint, were put out around a large plate of steaming hot mansaf as the father, Um Haya, began setting out the reasons he fled Syria. They are all the ones we’ve now come to know. Even without an interpreter, you could tell it was hugely painful for him to bring up.

And then a really strong smell of garlic came bursting from the kitchen. An interpreter was translating the story of how the family had made it to safety in Jordan, along with 700,000 other refugees, when someone asked, what’s that smell, “What are you making?”

And then the whole conversation changed. The mood in the room lifted. We started talking about tomatoes. And food from Homs. Their little girl Haya came in, nagging and upset because she still wasn’t able to go to school. Her father took her by the hand and sat her down on his lap in the mannerly and gentle way you’ll see Syrian children blend in to the main scene and not be kept apart from the adults.

The family was nervous about cooking for a chef, they said, but they were also excited. They had a little baby eight months previously. That was the last time they sat down to have a large meal with anyone.

This is the reality of the Syrian refugee crisis. While the rest of the world bickers about keeping refugees out, 5.6 million Syrian refugees continue to live in the countries next door to their own. They are teachers, doctors, van drivers and shop owners, mothers and grandfathers eking out a living in countries like Jordan and Lebanon, where the vast majority now live on less than $2 (€1.77) a day.

“Genuine Aleppo Syria chilli peppers” sell for €10 for 250g in Borough Market in London, while the bulk of Syrian refugees now live in chronic poverty and in fear of their lives at home.

They don’t know if what’s left of their homes has been destroyed by the war and even if they did, the thought of returning home in the near future is unimaginable.

One man told me how he pulled his dead wife from the rubble of an air strike. Instead of psychological care, he ended up being arrested and tortured because he shared the same name as a man on a police list. Another family with their own business in Daraa, where the war started, had exhausted their savings and taken their oldest son (16) out of school. He now helped his father push a vegetable cart in order to pay the rent in Beirut’s slums.

What could this proud man, who ended up in a situation he never envisioned, want?

To see his children happy, on a bicycle and getting an education. “That’s the only thing I want in life.”

He and his three children are some of the lucky ones. They are among the 600 or so Syrian refugees who Ireland will welcome this year. More than 2,000 have come here since the war started, and their impact has already been positive. They’ve gone back to school, opened bakeries and car washes, and contributed to communities in the way only someone who has been given a second chance at life can. Fortunately they’ve brought some of their delicious food, one of the world’s great cuisines, to Ireland as well.

At the Big Grill barbecue festival last year, I was given the unenviable task of making vegetarian food. I wasn’t expecting to break even, or even be busy, except that I roped in Amar from Co Waterford to help me. Amar first fled from Syria to Turkey, then to Greece, where he spent a year selling Syrian man’ousheh to other camp residents. A sort of Levantine pizza, he made around 2,000 a day over the weekend. The breads were layered densely with thyme, sumac and sesame seeds in a heavenly concoction called za’atar that made people’s hairs stand on end.

They’re the flavours that remind you of how civilisation started in the Middle East. When my ancestors in Co Tyrone were drawing shapes on stones, the first libraries were being opened around the Fertile Crescent, those areas where wild crops were being cultivated for the first time. It’s where the first bread was baked and bread, in all its forms, is a topic I return to again and again with many refugees. Because when you talk about food you always have happy memories, even if it is a memory of something your grandmother burned to bits.

Almost 80 years ago my grandfather passed through Syria and Jordan after fighting Rommel in North Africa with New Zealand’s 6th Infantry Brigade. That war displaced more than 10 million people, many of whom were eager to go home. Many could not however, which is when the world’s countries came together to accept the forced labourers, concentration camp victims and others who could not go back to countries where their politics or religion were no longer acceptable.

It was a tremendous example of solidarity, one which we could do well to remember today. Refugees don’t choose to flee home, but we can all make a choice to help them, wherever they may be.

Jess Murphy's trip to Lebanon was funded by UNHCR, the UN Refugee Agency.