My first date was at a wake, on an island off the west coast

Kevin Toolis, author of My Father’s Wake, on his first courting by a coffin 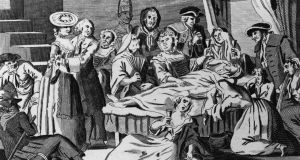 The Humours of an Irish Wake as celebrated at St Giles London, about 1750. Photograph: Engraving by Thornton / Hulton Archive/ Getty Images

‘Shall we go back to the wake for the craic?’

It was some opening line for a teenage date.

I was 15 and standing on the floor of the Wavecrest Ballroom on an island off the west coast of Co Mayo. It was just past 2am and in my arms was the warm, enticing body of Sinead, my would-be girlfriend.

The offer had come from Eamon, an older brother of one of Sinead’s female friends, and more importantly the owner of a precious car that we could all pile into and avoid the seven-mile walk home.

The craic usually means laughter, fun and games, but the offer of further teenage rollicking with a corpse in the room was unknown territory for me. The decision was made by Sinead. ‘Why don’t we?’ she said directly, a stab of lust there in her green eyes.

As a dating proposition, going on to the wake did have certain irresistible attractions; my time with Sinead would go on; there was nowhere else to go on the island at two in the morning and, as teenagers after a hard night’s dancing, we were ravenously hungry.

Soon, nine or 10 of us, Mairead, Maureen, Mick, Patrick, Sean and Sheila, were piled in Eamon’s Ford Cortina and driving towards the wake house.

Inside, the house had a raw poverty. We turned sharp right into what must have been a front sitting room but now held the coffin, rows of seats, and a dozen or so seated mourners. The air was thick, almost choking, with cigarette smoke.

With Eamon as our lead we shuffled our way forward the corpse, a Seamus. On the way we shook hands solemnly with the dead man’s two middle-aged stoutish daughters, Rose and Breda, garbling our ‘Sorry for your trouble’ before an obligatory mumbled prayer at the head of the open coffin.

But even as these things go Seamus wasn’t looking great. In his final illness his liver must have packed up and his skin had the vivid cartoon yellowish look of the heavily jaundiced. Close up, looking down on Seamus in his coffin, the most striking thing though was his nostril hair, which comically hung down in two walrus-like tusks from his bloodless nose. Seamus’s layer-out had also forgotten to trim the old man’s facial hair, which sprouted from his ears in wiry mini-forests.

There was a leaden atmosphere in the room, a dry-eyed exhaustion. We soon gathered that Seamus, even in his daughters’ grief, was being classified as a happy corpse.

‘Sure, isn’t it happy for him...’ leaving unsaid the final words of relief ‘...and for us that he is finally dead’.

After our own pretend prayers and faux sympathy we sat down in a group, just feet from the yellowed corpse in the midst of surrounding mourners, an influx of tipsy, giggling teenagers.

When the sandwiches came round we tucked in, scoffing plate after plate until more were brought. Eamon, straight-faced, called out for a refill of tea by saying his throat was ‘almost as parched as Seamus’ there’.

Squirming at Eamon’s blatant mockery of the corpse we practically pissed ourselves trying not to burst up in open laughter. Weirdly, Eamon’s testing demands were met with a bland, unseeing acquiescence by Rose and Breda. An extra cup of tea for Eamon soon arrived.

The real craic, also known as prumsaí on the island, a form of courting at wakes, was just about to begin. From his pocket Eamon produced a small button and held it out in the palm of his hand. ‘Let’s play the Ring.’

It was a teenage dating game, a version of Spin the Bottle. We held out our pressed together palms and Eamon went down the line and secretly slipped the button into the hands of one of the players.

Unknowingly at 15 I had stumbled into one of the oldest rites of humanity. The Ring was a wake game, an ancient death ritual that was first mentioned in the eighth-century BCE poem The Iliad.

Led by a male cleasái like Eamon, a master of misrule, wake games are a defiant usurpation of death’s power, the prevailing social order of priests and authority and a vibrant proclaiming of the present pleasures of the flesh.

The object of the game was to guess who amongst us held the button. The penalty for a wrong answer for a boy was a bone-jarring blow on the back of your knuckles by Eamon, whose metal-like fist inflicted searing pain. The penalty for a girl was five minutes outside in the dark, with a boy chosen by Eamon.

Locked into this dating game we burst out in suppressed laughter at another girl or boy’s crimson embarrassment at a wrong answer. We flirted. We teased and mocked, sniggered and guffawed and sought a way to clandestinely pair up with the boy or girl of our sexual desire.

Seamus, being dead, made no objection to our revelry but neither did his daughters Rose or Breda. Nor did the old men, farmers in flat caps, who sat all around us, who waked along with us through that night. No one said a word. Not even a hostile glance. As if this teenage renewal, these ancient rites of prumsaí, was part too of Seamus’ departing.

Unconsciously even in our prumsaí, the wake was also training us too for our own death. Like the older mourners all around us, we too, although teenagers, were being trained to see the sight and touch of the dead as nothing strange – just the very ordinary dead.

Playing the Ring whilst waking along with the dead has a price. The back of my hand ached for days afterwards, bruised from wrong answers. But it was worth it. Because out in the moonlit dark at the back of Seamus Gallagher’s wake house, paying forfeit, I first laid my lips on Sinead’s tremulous mouth. The dead man inside in the box had only heightened rather than deterred our hormonal urges.
My Father’s Wake: How the Irish Teach Us to Live, Love and Die, by Kevin Toolis is published by Weidenfeld & Nicolson. Toolis will be reading from My Father’s Wake on Thursday, October 12th, at 7pm, in Ballyroan Library, Orchardstown Ave, Oldorchard, Dublin 14, as part of the Red Line Festival. Tickets: redlinebookfestival.ticketsolve.com