David Bowie: A Life is a flawed but thrilling read

Constructed from interviews with 182 people who knew Bowie, there’s a lot of repetition 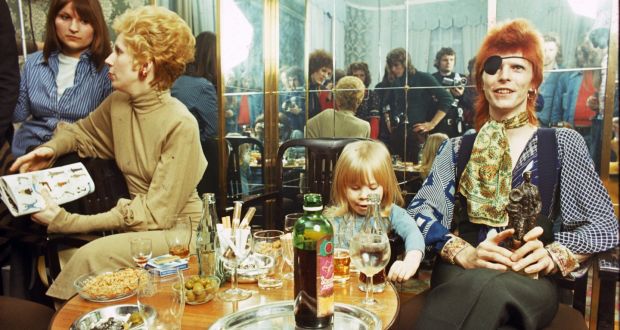 In English music hall, a lick of facepaint and a costume and you could become anybody. David Jones (AKA David Bowie) saw this as a boy when his PR professional father exposed him to London’s showbiz scene. “Every performer needs to be a great seducer, and David learned that from an early age,” says Wendy Leigh in Dylan Jones’s mammoth oral history David Bowie: A Life. It’s not hard to see Bowie’s later extravagant metamorphoses as music hall performance on the largest stage.

Bowie’s father also taught him the importance of impeccable people skills: how to be likeable and put others at ease. Combined with Bowie’s glut of other qualities – creativity, intelligence, ambition, professionalism, workaholism, ego, charisma, a brilliant baritone voice, an encyclopaedic knowledge of R&B, and a face to make Adonis jealous – it enabled his reaching the summit of the music industry. That process took a decade and featured shifts in skiffle, mod, music theatre, folk, hippy and cross-dressing personas before eventually establishing himself with glam rock. Reading of these changes you have the impression of someone at a door with a batch of keys, trying each one: ingress is inevitable.

No less decisive than this decade mastering his craft was Bowie’s eye for finding useful people. “[A]ll the people he chose to work with were very bright,” says David Pullman (Bowie’s 1990s investment banker). Pianist Mike Garson likens him in this way to Miles Davis; a more deliberate role model was Warhol. Once someone was unnecessary Bowie would drop them. “[I]f it was time for you to dissolve in that moment then he’d finish with you,” Ava Cherry notes. Bowie’s charm usually softened the blow.

Constructed from interviews with 182 people who knew Bowie, this oral history is as close as we’ve got to an authoritative biography. In the end, it falls short of that. Jones isn’t quite Plutarch (it’s hard to get past his book of interviews with David Cameron) and there’s little effort at biographical analysis. Read in a more straightforward way, though, Jones’s tome is an entertaining portrait of the artist as a pre-millennial androgyne.

It’s a goldmine of anecdotes: Carlos Alomar bringing Bowie to the Apollo in Harlem (“probably the whitest white guy I have ever seen”); orgies; holding court in extravagant costume surrounded by aides (“it was like being in the presence of a sultan”); studio fixations (“he would spend a whole day doing finger snaps”); dreading Roger Moore’s knock at the door whilst living in Switzerland (“The only person who used to come round was Roger Moore. And he said Roger Moore used to come round every f***ing night”); and, incognito, giving a spontaneous tour of the Vatican’s artworks to a crowd of tourists.

As high as his IQ was, he needed to stay around very bright people to stay that luminous

The liveliest pages are those detailing Bowie’s deranged mid-1970s years. Holed up in LA in cocaine psychosis, not sleeping for three or four days at a time (“I never ever saw David sleep. Ever.”), Bowie sees the devil materialising in his swimming pool, becomes obsessed with Hitler, and is convinced the Manson Family are going to kill him. LA allows Bowie to take his otherness to its limit.

“There was a moment when we were getting high and David started to bleed from his eye,” Glenn Hughes recalls, noting that Bowie rarely ate (“he just drank a lot of milk”). Bowie’s 1970s cocaine addiction doubtless precipitated his 2004 heart attacks, but the period also yielded the sui generis masterpiece Station to Station (1976) and the sublime Berlin albums. Upon relocating to the island of Mustique and to rural Switzerland, Bowie’s inspiration ran dry. “As high as his IQ was, he needed to stay around very bright people to stay that luminous,” Bono observes.

Where to begin with David Bowie: A Life’s flaws? There’s tedious repetition, out of sequence chronology, credibility-free contributors. There’s little fact-checking. If you’re looking for analysis of the songs, look elsewhere (Jones is more interested in dwelling on Bowie in the bedroom). We lack vital information about Bowie’s business dealings. When Jones interpolates his own expository prose, it’s generally gossipy or shallow (“He could be pissy,” we’re told at one point). There’s execrable armchair psychology on the influence on Bowie of the mental illness running in his family. “[T]he lack of subjectivity employed by the editor should enable the truth to shine through,” Jones writes, a fine example of special pleading.

The book’s a thrilling ride, though. And how exactly do you write the biography of a man who, at the outset of his career, sang, “Don’t believe in yourself”?