Money, politics and what it means to be Irish

Patrick Pearse set out a mystical rationale for Irish nationality. How does his vision stand up in now, and can a nation state compete with the forces of hypercapitalism? 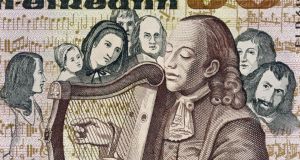 Recently I stayed up all night to follow a cricket match between Ireland and Papua New Guinea which, because Papua New Guinea has no first-class cricket ground, was taking place in the tropical northeast of Australia. By “follow” I don’t mean watching the play itself. I mean watching the online scoreboard. A duller pastime would be hard to imagine. I was rapt, though. I badly wanted Ireland to win.

To put it another way, I badly wanted the Papua New Guineans to lose. We’re talking about a dedicated and skilful group of players who learned their sport on dirt roads and carry the hopes of an earthquake-torn, malaria-ravaged country with an average per capita annual income of just over €2,200. I wanted these men to return home empty-handed. Why? Because I’m Irish.

That’s how nationalism works. It authorises me to favour the interests of one group over those of another on the grounds of identity – of perceived sameness and difference. But what is the basis of this perception? To what extent is it still valid, a century after the Irish revolution?

The new phenomenon was rooted in the Enlightenment notion that people are born free, and equally so, and that their freedom should be entrusted only to the group with which they have the greatest identity of interests – their nation, whose members typically have in common such things as language, ethnicity, culture, religion and geography. National self-determination follows from personal self-determination. A person is autonomous only if her nation is, and a nation is autonomous only if it is a nation state.

That’s the easy bit – the theoretical stuff. The facts of nationality are hard. First of all it requires the putative national group to be conscious of itself as such – as a collective with shared vital interests. For centuries it was far from obvious to, say, an Irish-speaking Catholic labourer in Galway that he should identify with a Protestant landowner in Dublin, and vice versa.

When, in 1724, Jonathan Swift published his Drapier’s Letters to campaign against the introduction to Ireland of low-quality coins minted in England, he began by telling his Irish readers: “It is your folly that you have no common or general interest in your view.”

This admonition was addressed to the shopkeepers, tradesmen, farmers and “common-people” of Ireland; a separate pamphlet was addressed to the “nobility and gentry”. Not until his celebrated fourth letter, to the “Whole People of Ireland”, did Swift abandon social classification in favour of a single national entity.

But even as they promulgate a classless solidarity against an English economic attack, the Drapier’s Letters have this curious feature: perhaps for tactical reasons, they seem to exclude from their rhetorical ambit the “papist” masses who constituted the great majority of the population.

It wasn’t until the next century that the likes of Thomas Davis, another Protestant writer, systematically advanced a vision of Ireland as an inclusive, unitary “nation” to which all the Irish belonged, irrespective of class or religion. And it wasn’t until after the Easter Rising that this vision of nationality caught on with most, but not all, of the people of Ireland.

For Pearse, Redmond and his followers were guilty of a shameful, treacherous error. In his pamphlet Ghosts he wrote: “They have conceived of nationality as a material thing, whereas it is a spiritual thing . . . Hence, the nation to them is not all holy, a thing inviolate and inviolable, a thing that a man dare not sell or dishonour on pain of eternal perdition. They have thought of nationality as a thing to be negotiated about as men negotiate about a tariff or about a trade route, rather than as an immediate jewel to be preserved at all peril, a thing so sacred that it may not be brought into the market places at all or spoken of where men traffic . . . Freedom, being a spiritual necessity, transcends all corporeal necessities, and when freedom is being considered interests should not be spoken of.”

We know what happened next: a terrible beauty was born, and from it emerged the Irish Free State and also Northern Ireland, a bitterly contested autonomous region with a divided sense of itself.

Only very recently have its people developed a new, common identity; almost a quarter of them describe themselves as “Northern Irish”. The Republic, meanwhile, had its own problems of unity: Anglicans emigrated in great numbers, Travellers continued to experience exclusion and hostility, and a kind of statist power was vested in the Catholic Church, with catastrophic consequences.

All that said, the island’s political arrangements now meet with the spiritual consent, if you will, of almost all concerned. But the material realm remains vexing. Huge numbers of Irish emigrants have traded their native citizenship for that of another state and, for better or worse, the Republic has given up a measure of self-government in return for membership of the EU and the euro zone. Pearse was mistaken: nationality is economically soluble. Now a still more powerful solvent has revealed itself: globalisation.

The nation state versus hypercapitalism

Many nation states find themselves in a chronically hazardous position that Ireland recognises all too well: increasing dependence on corporations (financial institutions in particular) that are increasingly uncontrollable and increasingly driven by a hypercapitalistic ethos.

Thus an Irish person’s liberty of action is no longer regulated exclusively by the State. De facto, and to an unprecedented degree, it is also regulated by stock price movements, currency fluctuations and corporate bets that neither Irish people nor their political representatives know about or have a say in.

In this sense the people of Ireland have acquired a strange financial-political nationality. They are the subjects of an opaque, unanswerable monetary realm whose populace shares this perverse characteristic: precariousness. Precariousness is the opposite of autonomy: it is the situation of being at the mercy of an other.

“All government without the consent of the governed is the very definition of slavery,” wrote the Drapier. But are we sure, in Ireland, that we don’t consent to our new government? After all, few countries have been as intent as the Irish Republic on assuming the liabilities incurred by the financial sector upon the collapse of the banking system. Few states are as determined to shelter multinational corporations from taxes. Can a people so complicit in its own precariousness really be said not to consent to it?

Nor is Ireland immune to a second strain of financial nationality: the retreat from naturalisation. In Dubai, for example, immigrant families, even if resident for generations, have almost no way of becoming Emirati nationals. Citizenship is replaced by denizenship. Are we sure we are not heading in the same direction?

Which brings us to a still more profound consequence of the digital age: the globalisation of social and human information.

This phenomenon upsets another fundamental assumption of nationality, namely that we can in good conscience prioritise “our” wellbeing over that of foreigners.

That made practical sense a century ago, when only the situation of the Irish was really visible to the Irish, and when engagement with the wider world was curtailed by the emergency of colonial oppression. The internet and the passage of time have changed all this. Ireland is no longer a colony, and practically everyone on the planet is visible to us, even Papua New Guinean cricketers and Syrian refugees. In a spiritual sense, Alan Kurdi washed up on a beach in Ireland.

How to proceed? Broadly speaking, we have two options. Either we double down on nationality and, deepening our perceived difference from others, try to go it alone. Or we accept a global, or postnational, identity in addition to our Irish identity, and try to embrace the responsibilities of such acceptance.

To open ourselves to “the other” exposes us to an almost infinite claim on our material and psychic resources. And yet to shut ourselves off exposes us to moral perils. Both options are risky, both are difficult, and both involve an alteration of identity. Only one, it seems to me, is in the right. Pearse was not mistaken to think that nationality must have a spiritual dimension – by which I mean that it must involve a people’s sense of their immaterial self. If being Irish means wronging others, surely Irish nationality fails.

Joseph O’Neill is one of the speakers at Imagining Home: On Revolution, at the National Concert Hall in Dublin on March 31st. The event is part of a seven-concert series that looks at Ireland’s cultural journey over the past 100 years, its place today and its future