A priceless glimpse of the young Barack and a first lady’s life, told in often arresting prose 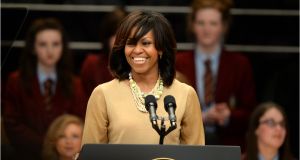 Michelle Obama speaks at the Waterfront in Belfast in 2013. Photograph: Dara Mac Dónaill

Michelle Obama’s Becoming narrates the remarkable rise of its author from shoebox apartment on Chicago’s south side through Ivy League undergrad and grad school to white-shoe law firm and her subsequent collision with “an Afro-Kansan-Indonesian-Hawaiian-Chicagoan” with a “weird name and quixotic smile [who] brilliantly upended everything”.

Bright and driven, she tests into an elite high school, thence – defying a counsellor’s advice to aim lower – to Princeton. She’s subsequently admitted to Harvard Law before being recruited to the partner-track at Sidley & Austin in downtown Chicago. Here, she runs headlong into an intern – 28 to her 25 following a detour into community organising – on vacation from his own legal studies at Harvard. The two become smitten.

Thus, Becoming affords a priceless glimpse of the young Barack Obama. One is reminded of the singular personality (Michelle brands him a “unicorn – unusual to the point of seeming almost unreal”) of this unlikely political animal – a renunciate with an outsize social conscience and monk-scholar tendencies who scandalises fastidious Michelle with his permissive attitude toward marriage (unnecessary) and smoking habit. Yet he’s an everyman who sails through brother Craig’s pick-up basketball game litmus test – the verdict: “He’s no ball hog…but he’s got guts.” And he’s that rare beast: someone unbeholden to others’ expectations, determined to find his own path. “Barack was serious without being self-serious,” Michelle reflects. “It occurred to me, too, that quite possibly the man would never make any money.”

Michelle is spurred by Barack’s example to expand her horizons beyond personal upward mobility – “It was one thing to get yourself out of a stuck place…another thing entirely to try to get the place itself unstuck.” She quits Sidley for a nonprofit devoted to cultivating community leaders. For his part, Obama is drawn to Michelle’s groundedness as a daughter of the south side raised in a stable family, rooted in Chicago’s African American community.

They’re married in 1992, forming a “yin-and-yang duo”. The vaunted “no-drama Obama” calm – a balm to the nation during crises – could be aggravating inter-personally: “Barack…tends to remain cool and rational, his words coming in an eloquent (and therefore irritating) cascade.” And you could take the man out of Hawaii but not Hawaii out of the man; he operated on island time – perennially running late, a failing she charitably attributes to “eternal optimism”. Then there’s his bottomless zeal for new projects. “He was like a circus performer who liked to set plates spinning…a serial over-committer.”

Michelle caught flak during the 2008 presidential campaign for kvetching about Barack’s failure to pick up his socks after him and other domestic delinquencies – deemed by New York Times columnist Maureen Dowd an unseemly, infantilising schtick. “For me, it had always been important that people see Barack as human and not as some otherworldly savior,” she rejoins. “Maureen Dowd would have preferred, apparently, that I adopt the painted-on smile and the adoring gaze.”

But this conveniently overlooks Dowd’s intimation that Michelle’s vigilance did not extend to possible real dirty laundry – a transaction to extend their personal property line involving a subsequently-jailed wheeler-dealer who also contributed to Barack’s political coffers.

Becoming’s prose is at times arrestingly good. The suspense of Election Day is rendered with numinous brevity: “You’ve leaped but you haven’t landed.” Then there’s this elegant gloss on the stressors on her husband as president: “His job, it seemed, was to take the chaos and metabolize it somehow into calm leadership…”

But – a function perhaps of her delimited role as First Lady – it drags during the White House years. Chastened by Hillary Clinton’s fumbled attempt to eke out more substantive responsibilities for the office, Michelle bridles at being reduced to futzing over protocol. Still, she drills down on a drive to reduce childhood obesity. And her encounters with veterans are heart-rending: “I found a broad-shouldered young man from rural Texas who had multiple injuries and whose body had been severely burned. He was in clear agony, tearing off the bedsheets and trying to slide his feet to the floor. It took us all a minute to understand what he was doing. Despite his pain, he was trying to stand up and salute the wife of his commander in chief.”

Michelle’s disdain for Trump has been widely reported; she blames him for callously imperilling her family. Not long after he reprises “birtherism”, a gunman shoots up the White House. More glaring though is her resounding silence on the personal handover to Trump as president. Presidents and First Ladies, past and present, have formed a sodality transcending party affiliation. Trump’s sniping broke the chain.

And yet the Republic beats on. “A hand goes on a Bible; an oath gets repeated,” she writes. “One president’s furniture gets carried out while another’s comes in. Closets are emptied and refilled. Just like that, there are new heads on new pillows – new temperaments, new dreams.”