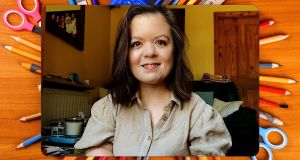 Sinéad Burke puts it beautifully in her message, “I’m so honoured to be speaking to you. Because who knows who’s watching? Maybe it’s the next President of Ireland. Maybe it’s the first female taoiseach.”

I run writing clubs for children. Before the pandemic I held four weekly clubs in various venues: schools, libraries and the junior rooms at a sailing club. Once lockdown began I moved them all online and added free clubs for the children of frontline healthcare workers, some weeks hosting up to 10 different clubs.

Many of the children in these clubs are in sixth class and as the weeks have gone by I’ve noticed some of them getting quieter and quieter. They told me how devastated they are to be finishing sixth class with no live graduation ceremony or parties. “I’m just really, really sad, Sarah,” one of them told me. It almost broke my heart. I wished I could do something to make her feel better.

It gave me an idea – maybe I could do something. On social media I offered to make speeches at Zoom graduation ceremonies. Within a few minutes I was inundated with requests – so many that I had to delete the post! There was obviously a huge demand but I couldn’t possibly take on hundreds of schools. However, during the flurry of posts several children’s writers had offered their help to schools also. That gave me another idea.

I thought of a way I could reach all the schools in Ireland – by prerecorded video. And there were far more interesting people to talk to sixth class out there than me so I decided to ask them for help. So began the #Messagesfor6thClass project.

I started with the people who had kindly offered to help on social media – Robin Stevens, Derek Landy, John Boyne. They all said yes immediately. I then moved on to other friends in the book world who write for this age group and who children know and love: Eoin Colfer, Marita Conlon-McKenna, Judi Curtin, Alan Nolan, Oisín McGann, Paul Howard.

I wanted to make sure gaelscoileanna were included so I invited five Irish language children’s writers to take part, including the new Laureate na nÓg, Áine Ní Ghlinn. I asked the Irish Deaf Society to help with an ISL (Irish Sign Language) version.

Thirty-three messages for sixth class arrived and were ably edited by professional video editor Richard Speedie. Not something I could take on alone!

Marita Conlon-McKenna’s granddaughter Holly is in sixth class and in her message she explained how much she was looking forward to “confirmation, the graduation party, playing a match against her teachers, signing t-shirts and sweat-shirts, getting photos with all her friends and putting on a class play”.

Alan Nolan’s son Sam is also in sixth class and he says in his message: “Sam’s sad to miss out on the end of sixth class... but he’s DYING to start in first year, he can’t wait to get back to school... secondary school is something to look forward to, and you guys are going to do great.”

Zainab Boladale’s brother is in sixth class and in her message she says: “I have a brother who’s also in sixth class, so, like him, I know many of you are feeling a lot right now. You’ve been home since March and you’re probably missing your school, teachers and friends. You’re also probably thinking about the future and have a lot of thoughts, questions and maybe even worries about starting secondary school in a few months. It’s a big jump but there’s so much to look forward to, think about it, you’re at the beginning of your teenage years! I remember being 13 and feeling so cool that I was officially a teenager.”

The messages have been watched by over 25,000 people already and the numbers are rising every hour. I am so proud that together we managed to do something to mark the heroic sixth class of 2020 and helped in some small way to send them off in style. The children watching the videos are the future of our country.

“Maybe you’re going to be a musician who will tour the world, entertain millions of people in enormous stadiums. Maybe you’ll be a teacher like me and inspire the next generation of children to think about education as something that will always be a part of them. Maybe you’ll be an artist and your work will be displayed in galleries at home and abroad.

“Maybe you’ll be a scientist and come up with a cure for something we desperately need, who knows?

“And the best part is – anything is possible. Because maybe your dream job or the part you play in society might not even exist yet. Maybe you’ll be the first.”

The #Messagesfor6thClass videos are available via the Children’s Books Ireland’s YouTube channel or via childrensbooksireland.ie