The images cover the whole gamut of conflict, juxtaposed with day-to-day street life 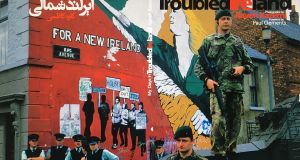 The 1980s was a turbulent period in the tangled history of the Troubles. Many horrific events left an indelible impression on those affected and a legacy that is still being lived out. Since 1969, Northern Ireland began to attract the attention of an overseas audience and from the republican hunger strike of 1981 and the rise of Thatcherism, there seemed to be no end in sight to the conflict.

Northern Ireland was frequently in the media spotlight, grabbing the headlines with images of death and destruction being shown around the world. The job of capturing some of these graphic, and often harrowing events, fell to reporters, cameramen and photographers. Many worked for the local press and broadcasting stations, while others – known as visiting “firemen” who travelled the world’s trouble spots flew in to carry out their work for British, American or European outlets and agencies.

In a chance meeting during the summer of 1985, I encountered Kaveh Kazemi, an Iranian freelance photographer working for international publications. We struck up a rapport and I showed him around the streets of Belfast, explaining the complexity of a situation often difficult for outsiders to understand. He quickly grasped the local nuances and the significance of different colours of kerbstones.

On one occasion, we drove to Crossmaglen in south Armagh, to what was then known as “bandit country” because of the dangers it presented for the British army and RUC. Soldiers with supplies were airlifted by helicopter in and out of army watchtowers, military installations and heavily fortified bases called sangers. Observation posts and lookout stations were scattered on many prominent mountain tops, and a primeval atmosphere lurked in these low hills and fields. With the huge security presence and a serious terrorist threat an everyday reality, this was what might be classified as a press photographer’s “dream” place. It was not safe for anyone to walk the roads since the army kept all movements by locals under constant surveillance and a landmine could have exploded at any time.

Kaveh was naturally anxious to secure photographs immediately although I explained to him that it would be best not to poke his long lens straight out of the car window without an advance declaration of what we were about. Clearly we were going to stand out, and the only realistic approach was to produce our press cards to the officer in charge of the patrol. We duly did this and were then granted permission to photograph images of the countryside with soldiers patrolling and police checkpoints operating around the local towns.

Over the course of the Troubles there have been many defining images featuring propaganda from all sides. Kazemi’s pictures are a meditation on a place at a particular period and are important, not simply from a journalistic perspective, but also from social awareness. His pictures evoke a time and place, telling their own story in a way that words cannot do justice to. They represent his personal experience and vision but also show his curiosity. Through his lens he captured unique and engaging portraits of people, from the countryside to cities.

His sharp eye brings out the telling detail, whether a colourful mural or graffiti on a gable wall. Nowadays the murals attract thousands of tourists. Back in the 1980s they were a form of expression since dramatic murals testified to the power of art as historic document and now serve as a reminder of painful pasts. The photographs also reflect social issues: a boy smoking beside wood gathered for a bonfire, young children playing near the rubble of a barricade or teenagers enjoying a party with a backdrop of violence. The images cover, not only the whole gamut of conflict, but are juxtaposed with day-to-day street life, which for many people continued as normal in what was often an abnormal situation.

It is important to appreciate the wider context of the times and put these photographs into perspective. Northern Ireland has come a long way in the 35 years since they were taken. Few of these are posed photographs since in most of them local people are seen in their natural state. Some are dramatic action shots where Kazeni was clearly in medias res, unafraid of getting close to the action.

Aside from Belfast, south Armagh and other towns, he made the journey to Derry and Donegal. In 1969, the words ‘You are now entering Free Derry’ were scrawled across the gable end of a wall in the Bogside and the lettering became instantly recognisable as a symbol of resistance and a defining image of the Troubles. On the other side of the political divide, he pays equal attention to the collarettes of the Apprentice Boys of Derry marching purposefully across Craigavon Bridge with their bowlers, brollies and bannerettes – the very epitome of resolution and stubbornness.

Kaveh Kazemi’s photographs portray a troubled place of sectarianism with a diversity of viewpoints. His brave and unflinching images serve as a reminder of what people lived through and hold up a powerful mirror to that time.
This is the foreword by Paul Clements to My Days in Troubled Ireland featuring images by the acclaimed Iranian photographer Kaveh Kazemi, who will be speaking at the launch of his new book at Belfast Exposed photographic gallery at 6pm today