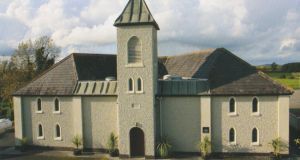 St Mary’s Church, Pollagh, from The Story of Brickmaking in Pollagh, Co Offaly by Caitriona Devery

Brickmaking was an important craft all over Ireland in the 18th and 19th centuries. The industry put a village in Offaly on the map, and today Pollagh is still known for its bricks. Caitríona Devery’s The Story of Brickmaking in Pollagh (Pollagh Heritage Group, €15) outlines the evolution of the industry through the collective memory of those who worked in it.

Ideally situated on the Grand Canal west of Tullamore, Pollagh once boasted 13 brickyards whose history is central to the village’s development. Many different processes were involved in what was a skilful and demanding job. Yards used a blue clay which when fired created a distinctive yellow brick.

In Pollagh, an example of locally produced bricks is St Mary’s Church, an architectural curiosity. In order to work out the size of the church, Canon Matthew Columb asked parishioners to kneel down on the site to measure the amount of space required. Taking social distancing and segregation of the sexes to the extreme, he designed two separate naves, one for men and one for women, and while neither could see each other, both could see the altar. It was referred to as the “Britches Church” as the design resembled a pair of trousers.

Around the same time brickmaking was flourishing, a completely different craft was developing in the late 19th century. In Sophie Sturge and the Connemara Basket Industry in Letterfrack, 1888-1905 (Religious Society of Friends, €15, sturgebook@gmail.com), Joan Johnson has pulled together hitherto unpublished letters to produce an insight into a lesser-known industry.

Sturge grew up in a Quaker home in Birmingham and on a visit to the west in 1887 was moved by the poverty. After learning how to make baskets, she set up an industry in Letterfrack, creating employment by recruiting young weavers and making an important philanthropic contribution.

Letterfrack baskets were different from the indigenous Connemara ones such as the donkey creel and had a finer weave. Made into tables and chairs, the baskets were especially popular with cyclists. They were aimed at the export market and were exhibited at the 1893 World’s Fair in Chicago. When Queen Victoria visited Ireland in 1901 she was given a shamrock chair. The queen placed an order for four more as well as for four spinning chairs to be sent to Windsor Castle.

Industry and commerce collide in one chapter of Glenamaddy Boyounagh: Our People, Our Heritage (Glenamaddy Heritage Project, €20), edited by Peadar O’Dowd. Early industry concentrated on woodworking and mills such as Woodfield and Leitra corn mill, while in more recent years the business landscape embraced a range of bakery, joinery and engineering firms alongside family-run enterprises.

The product of six years research, this gargantuan book is a powerful testament to the invaluable work of hundreds of local volunteers. A celebration of the commonplace and oral history, it sweeps through religion, education, farming, Gaeilge, social services, traditions, leisure and sport, while a section on townlands runs to nearly 300 pages.

The whiskey industry is spotlighted in Henry McKenna (1819-1893), Kentucky’s Draperstown-Born Distiller (Ballinascreen Historical Society, £14), edited by Graham Mawhinney. The Co Derry man emigrated to America in 1837, working as a road contractor in Philadelphia before moving to Fairfield, Kentucky, where he founded a distillery. By 1861 his business produced three barrels of whiskey a day, later rising to five, and McKenna’s Sour Mash Straight Bourbon was renowned for its distinctive quality with demand exceeding supply.

The story of his business success is recounted through testimonies written by his son James and granddaughter Marcella. An honoured citizen, McKenna became known as “a man whose word was equivalent to a gilt-edged bond”.

The introduction of Prohibition was a heavy blow, although the product was kept on the market for medicinal purposes. From 1934 the company made a remarkable recovery and when it was sold seven years later, the brand name and sales tag were retained; it became known as “the bourbon with a brogue”. As recently as 2018 the Heaven’s Mill Henry McKenna Single Barrel Bourbon won the best bourbon award at the San Francisco World Spirits Competition.

The life of Mary Ward, a naturalist and artist born near Ferbane in 1827, is explored in her delightful Sketches with the Microscope in a letter to a friend (€20). First published in 1857, it has been reproduced by Offaly Historical and Archaeological Society with new essays by Michael Byrne and John Feehan. Ward’s great-granddaughter Lalla adds personal detail about how she too has inherited a love of drawing animals.

A cousin of the Earl of Rosse, Mary Ward was acquainted with many eminent men of science and illustrated her books with drawings such as those of the natterjack toad. At eighteen she was given one of the earl’s microscopes, sparking her scientific investigations. She met a tragic death in 1869 when she was thrown from a steam carriage in Birr in what is considered the world’s first fatal motor accident.