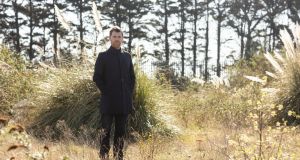 Adrian Duncan: “a type of Irishness I am deeply interested in is technical aptitude for building… it’s an Irishness that I feel is rarely ever talked about”. Photograph: Sean Breithaupt

Irish fiction finds itself in an extraordinarily rich seam of form. Adrian Duncan, a writer from Ballymahon, Co Longford, in his early forties with a career as a structural engineer behind him, cannot be described as an overnight success.

Love Notes from a German Building Site is, among many other things, a novel about not being young any more, not being a success. There is a memorable section when the narrator, Paul, recalls his undergraduate studies at Queen’s University Belfast and the gap in brain power between him and the smartest student in his engineering class, Neil, a dope-smoking, Metallica-loving slacker who manages a hair cut to please his parents for graduation.

The two young men salute each other on the big day when their university lives end, and Paul sees that something, to borrow from Philip Larkin, is pushing them to the side of their own lives: “I realize, and I reckon Neil knew this all along, that a facet of our curiosity had begun falling away in those specializing years in university, like a shard of rock dislodging itself from a cliff face and slipping quietly into the water below”.

At another moment, earlier in the novel, Paul, leaving a Berlin book shop, stares up longingly at some apartments, imagining the happy family lives that exist within them and thinking of his own parents’ modest bungalow back in Ireland. Again, thoughts of age intrude as he reflects that “if I was a few years younger I’d not be thinking like this; instead, I’d draw great fortitude from being alone and I’d strike out into the city”.

Like Duncan himself, Paul has another life behind him, the world of Dublin’s boomtime just before the fall of the Celtic Tiger, which he remembers with neither pleasure nor bitterness: “how fast and corrupt everything was and how quickly it all disappeared”.

Now he is in Berlin with his girlfriend Evelyn, a disillusioned former employee of Ireland’s Central Bank, as he works on a high-rise building project and she pursues a career in art curation, both refugees from Ireland’s crash. The love notes of the book’s title are as much thoughts about Evelyn and the nature of their relationship as they are lists of German words needed for Paul’s work on site. That Evelyn is of German parentage and fluent in the language is a key fulcrum to the novel’s action, preoccupied as it is by language, its precision and its acquirement. For a first novel the prose is remarkably mature and finished, without any hint of cliche, exaggeration or sentiment.

One possible reason for this purity of style is Duncan’s engineering past. Wishing to learn and commit to a style of his own, he avoids reading much contemporary fiction, concerned that his own prose might become overwhelmed. He prefers to turn to books such as Peter Rice’s An Engineer Imagines; Primo Levi’s The Wrench; or Hermann Melville’s Moby Dick. The last of these is quoted directly in Love Notes and reflects Duncan’s interest in the world of work, and of subjects sometimes dismissed, unfairly, as “boring”.

The best chapters in Duncan’s novel bear titles like A pallet of copper offcuts, and A note on why I prefer steel or timber over reinforced concrete.

Moby Dick, famously, is unafraid to list the minutiae of whaling page after page, chapter after chapter. And similarly here you will learn the German for the gradient, the load-bearing wall and scaffolding.

As in Mike McCormack’s Solar Bones, we have the engineer as a species of hero. It is, says Duncan, “a type of Irishness I am deeply interested in, and that is technical aptitude for building… it’s an Irishness that I feel is rarely ever talked about”.

If that all sounds a bit too understated then I’d encourage you to give in to the quiet beauty and meditative mood of this engaging, even exciting, novel. You find yourself caring deeply about Paul and Evelyn. As in Sally Rooney’s hugely successful Normal People, you want this couple to find a way to be happy in each other’s different, autonomous lives as much as you want Paul and his co-workers to drill the necessary holes and cut the right cables to get their building project completed on time.

Paul wants Evelyn to succeed and is fascinated by her love of visual art. There are several moments in the narrative when we see him wonder what else is out there, what else might he do now with his life, not yet old but no longer young. “I’d like to make something myself,” he tells her, “something useless. I want to make it as well as I can, and destroy it afterwards; no one need even see it.”

Well, now Adrian Duncan has made something, and we can see it.

Frank Shovlin is professor of Irish literature in English, Institute of Irish Studies, University of Liverpool