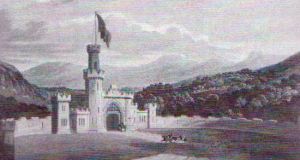 The arrival of a new Pevsner in the magisterial Buildings of Ireland series is something to cherish, causing a frisson of excitement in the normally serene world of the architectural historian. Central Leinster: Kildare, Laois and Offaly (Yale University Press, £45) by Andrew Tierney is the product of many years work and a Herculean task living up to the scholarly rigour of its predecessors.

The 700-page volume runs alphabetically from Abbeyleix to Yellowbogcommon, a tiny crossroads near Kilcullen. A vast array of churches, chapels and the ruins of castles, as well as thatched pubs, 18th century watermills and the Wonderful Barn with its cone-shaped ziggurat built as a folly in 1743, are given their due. The author has mined the three counties, documenting hundreds of vernacular treasures, scrutinising obelisks, chimneypieces, ogee-headed windows and Georgian streetscapes. Handsome banks and Palladian mansions are listed alongside more humble properties, while Tullamore’s courthouse (1833) with its graceful exterior, is described as the town’s grandest architectural statement.

The entries are written in a declarative style with succinct and punchy vignettes: “Clasping buttresses, plain parapet with corner pinnacles” describes Castropetre Church of Ireland on Blundell Hill, Edenderry, and in the same town, St Mary’s has “Cushion capitals of Portland stone, carved with Celtic interlacing and supporting prayerful angels”. The pre-eminent ecclesiastical site of Clonmacnoise features the famed north doorway of the Cathedral – the earliest surviving stone church in Ireland for which a secure date exists – plus eight churches, three high crosses, two round towers and one papal oratory, while Temple Finghin (circa 1167) decorates the cover.

Dating from 1814, when it was established by the Jesuits, Clongowes Wood College is rich in interiors. The mezzanine door through which Stephen Dedalus walked to get his punishment from the Rector in Joyce’s A Portrait of the Artist as a Young Man has survived but the distinctive serpentine corridor behind it was destroyed in 1999.

With quivering antennae and careful observation, Tierney has tramped boreens, wandered through abandoned railway stations and mooched around the shells of hotels to which most people would not give a second glance. Where the casual passer-by sees a jumble of dilapidated outbuildings and a gloomy town, he delights in humdrum streets, bringing history alive through the breadth of his curiosity and remarkable energy.

In the best Pevsner tradition, he is not afraid to speak his mind: Kilcolgan Castle in Offaly was “barbarously demolished” in 1954 to provide stone for a power station, “a depressing refrain around Ferbane’; Bert House, near Kilberry, has ‘a downright bizarre, blue, white and beige colour scheme that destroys the visual coherence of its parts”; the ceiling of St Catherine’s Church, Tullamore is “picked out in an unflattering paint scheme of red, yellow and white”. Highlights of the central section with 127 colour plates include the entrance hall of Castletown House, the rotunda of Emo Court, the exquisite stuccowork of the Saloon at Carton House, and the dazzling stained glass nave north window, Four Horsemen of the Apocalypse, by Murphy Devitt in the Chapel of St Eustace at Newbridge Dominican College.

The illustrated glossary elucidates architectural terms and will enrich word-power helping disentangle your anthemion from your bucranium. For specialists, locals and visitors this is an indispensable vade mecum to the important buildings of these counties. It is the fifth volume in the Irish series where progress has, to say the least, been leisurely with the first on North West Ulster appearing 40 years ago.

Unlike the exhaustive Pevsnerian approach, The Buildings of South County Down (Ulster Architectural Heritage Society, £28) by Philip Smith does not claim to be an inventory of every structure but employs the principle of selectivity. It is the fourth companion volume in the series started by Sir Charles Brett which so far has celebrated the built heritage of North Down, Antrim and Armagh. While it covers the grandiose set pieces such as Montalto near Ballynahinch (newly renovated and opened to the public), it is the stately middling-sized houses, from the end of the 18th or early 19th centuries, which outnumber other entries.

Bursting with detail and lavishly illustrated with colour images by Alan Turkington, the book provides a lively insight, spiced by informed comment and anecdotal footnotes. Lesser-known properties such as the Widows’ Row of 12 Victorian cottages in Newcastle were built for families of fishermen who drowned in a storm off the coast in 1843 which claimed the lives of 73 men. Elsewhere, antiquities, monuments, follies and the teahouse at Tollymore Park are all dutifully documented.

A dashing image of four horseriders approaching the Gothic Dublin gate at Markree Castle near Sligo adorns the cover of The Gate Lodges of Connaught (Wordwell, €20) by JAK Dean. This is the final gazetteer in his tetralogy covering all four provinces and represents an astonishing feat of publishing over five decades. Although the author states that numerically there are fewer gate lodges in Connaught than in the other provinces, they lack nothing by comparison in quality and variety, and he has tracked down records of a total of 774, complemented by 175 images.

One of the most striking buildings is Tiara lodge at the Rockingham demesne near Boyle on the shores of Lough Key. It is thought to have been designed by John Nash. The description will appeal to those who enjoy the free-flowing lingua franca of architecture and will enliven an exploration:

“This facade is recessed behind a curved verandah created by a hexastyle Roman Doric portico with responding pilasters on a stepped stylobate, the columns crowned by a remarkable embracing pediment, like a giant tiara, with a frieze of immaculately sculpted triglyphs, metopes with paterae, guttae and a dentilled cornice”.

Dean’s four books have increased awareness – not only of the English language – but crucially the significance of gate lodges, emphasising their uniqueness and the fact that they live in the shadow of the big house. Of a total of 10,000 lodges found in Ireland at one time, only a third have survived. The author’s motivation for his research, which began in 1964, stemmed from the fact that 60 per cent of gate lodges had been lost and he set about creating an awareness of their plight. Wordwell is to be congratulated on highlighting a frequently forgotten aspect of the built heritage and celebrating the survival of these unique properties.

Another fascinating aspect of the cultural heritage of the outdoors has been captured in Ann Lane’s book featuring sculpture throughout Ireland. By the way 2 (Wordwell, €30) reflects the new wave of public art and Lane’s obsession with her subject. She covered more than 35,000km on her quest to inspect and photograph diverse sculptures, roadside and riverside works of art and numerous quirky mosaics and murals. Her journey took her from “Romulus and Seamus” in Banbridge to “Cha and Miah” in Victoria Cross, Cork as well as hundreds of locations in between.

For many years the author has been interested in large outdoor installations, photographing them randomly when she came across them. This resulted in her first public art book in 2010 which has led to a second volume. Flick through its 400 pages and you stumble across the elegant granite sculptures of the 12 monks of Graiguenamanagh, spread around town engaged in a variety of tasks; discover the 21 life-size Irish animals at Baile an Coiste, Galway, or find out about the women traders of the Coal Quay market in Cork.

Some features are hidden in commemorative gardens and parks, others grace roundabouts, hillsides, shorelines and market squares. Wherever you find them, this book is certain to arouse curiosity and is an essential glove compartment companion along the byways and back roads.