This book seeks to reflect on the modern phenomenon of impersonal, bureaucratic murder. 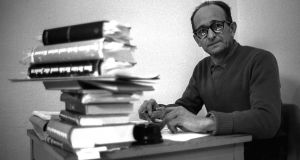 Nazi Criminal Adolph Eichmann in his cell in Galami Prison, near Haifa, waiting for his trial to open. Photograph: Gpo/Getty Images

“When [the van] is in operation, the load, in its effort to reach the rear door, places itself for the most part at the rear. For this reason the front axle is not overloaded … The pipe that connects the exhaust to the van tends to rust, because it is eaten away from the inside by liquids that flow into it. To avoid this the nozzle should be so arranged as to point downward … It has also been noticed that the noise provoked by the locking of the door is linked to the fear aroused by the darkness. It is therefore expedient to keep the lights on before the operation and during the first few minutes of its duration.”

These extracts are from a memo from June 1942 concerning adjustments to be made to a number of modified Swiss-made “Sonderwagen”, used for the industrial-scale extermination by carbon monoxide poisoning of Jews, Roma and other prisoners of the Nazi Third Reich.

The memo is reproduced in its all its extensive, mind-numbing horror in Dan Gretton’s book, I You We Them: Journeys Beyond Evil: The Desk Killers in History and Today. Part personal odyssey, part meditation on the nature of evil, the 1,000-page book seeks to reflect on the modern phenomenon of impersonal, detached, bureaucratic murder.

Gretton coined the phrase “desk killer” from the German original. “It’s actually a rather complicated word in German, which is Schreibtischtäter,” he explains. “Desk perpetrators would be a more literal translation, but I want to try and get this concept of the desk killer into mainstream public discourse because I think it’s been a massively neglected area in history.”

The archetype of this type of crime was formed in modern minds in the early 1960s with the trial of Nazi war criminal Adolf Eichmann in Tel Aviv. Eichmann was a mid-level functionary in the Nazi apparatus, responsible for the logistics of transporting millions of Jews to their deaths in concentration camps.

“Writers such as Hannah Arendt, who covered that trial began to talk about the Schreibtischtäter,” says Gretton. “The idea of the person who never actually killed directly but who signed the papers and gave the order has completely fascinated me for about 25 or 30 years now. It’s been a total obsession of mine, really, looking at why we’ve never really understood the power and responsibility of those perpetrators.”

The book draws parallels between the technocratic efficiency of the Nazi state and more recent events: the rationalisation of torture by US officials during the presidency of George W Bush; the complicity of Western oil companies in human rights abuses in Nigeria in the 1990s.

“One of the main oil companies involved was Shell, ” says Gretton, who writes in the book about the 1995 execution of activists including writer Ken Saro-Wiwa. “I just began to think about how could these people who work at Shell, especially the senior directors, just go into their building in Waterloo. What do they have to do in their minds to carry on business as usual when something like that, something catastrophic has happened?”

The final piece of the jigsaw came, he says, when he read Gitta Sereny’s book, Albert Speer’s Battle with Truth, based on interviews with Hitler’s favourite architect, who spent decades in Spandau prison after the end of the war.

“Speer uses a remarkable phrase in that. He says that ‘Hitler encouraged us to not only compartmentalise our actions but our thinking’. And I thought that is perhaps the key to looking at these kinds of desk killers or people working in corporations. It’s that people can compartmentalise. Remarkably little has been done on this in terms of research, and I thought that is the key.”

Group conformity and psychological compartmentalisation do seem to lie at the heart of this subject. Anyone who has ever worked for a large organisation will recognise the importance of both these traits.

You won’t really find new psychological or sociological research in Gretton’s book, although it does function in part as a compendium of some of the most profound thinkers and testimony on the subject: Arendt; Sereny; Primo Levi; George Steiner and WG Sebald are all quoted extensively. Claude Lanzmann’s great, nine-hour-long documentary, Shoah, is a sort of foundation stone for the whole project.

Like those writers, Gretton raises profoundly unsettling questions about the capacity for doing evil that exists within all of us, and the ways in which the distancing effect of technology allows perpetrators to avoid thinking about the consequences of their actions.

Gretton believes there’s a huge imbalance between our knowledge of Nazi atrocities and the ways in which the crimes of the bureaucrats have been elided or forgotten. Many of those responsible lived into a comfortable old age without ever being made accountable for their crimes.

Arendt, he says, issued a challenge to future historians, sociologists and thinkers: “Do not just think about the horror of the Himmlers and the Görings and the Heydrichs. Think about the entire construction of what enabled the Holocaust to come about. There were thousands and thousands of Eichmanns, hundreds of thousands of administrators.”

But what are we actually talking about when we discuss this mass complicity? We know that humans have always been capable of acts of terrible violence. We also know that technology mostly shields us from confronting the reality of warfare and atrocities.

Is it worse that industrialised violence renders such atrocities possible on a larger scale, or is it that we find it shocking that people “like us”, who work in offices and go home to their families every evening, can also be mass murderers, that the veneer of civilisation is so gossamer-thin?

“Primo Levi said this, in response to exactly what you’ve just said,” says Gretton. “Monsters exist but they are too few in number to be truly dangerous; more dangerous are the common men, functionaries ready to believe and act without asking questions.

Drone warfare offers greater capacity for what Gretton calls “distance killing”, insulating ourselves from the real consequences of violence

“We’re not confronted with the psychopathic killer, the sociopathic killer. Those people do exist and in fact our society is obsessed by what is very lazily called evil. But almost no attention is paid to the way millions of people can be killed through paper, through documents being emailed.

“I talk about lawyers in Washington in a chapter towards the end of the book, highly civilised men, who sat in their offices in Washington and sent memos about how we can torture detainees held in American prisoner centres without using the word torture.”

Drone warfare offers greater capacity for what Gretton calls “distance killing”, insulating ourselves from the real consequences of violence. “Which of course appeals enormously to politicians, because if you can kill people in Afghanistan from a computer terminal in Nevada, that is better for you with your public because you don’t have to put the soldiers in the line of fire. Yet what happens in that moment, which I find truly terrifying, is that the killing becomes utterly clinical. The people who are responsible for pushing those buttons have no sense of the carnage they’re causing. The blood, the smell, the guts … there’s nothing of that.

Despite appearances, You We Them is not a work of history. “There’s a lot of history in this book but it’s absolutely about our world now,” says Gretton “That could be somebody working at the Ministry of Defence. It could be somebody working at an arms company who’s involved with the supply of weapons to Yemen at the moment. It could be a lawyer, it could be friends of yours, it could be anybody who’s working in a large organisation where we do not really understand the responsibility we have.

“When an organisation becomes medium or large-scale, we actually lose that link of responsibility.”

The difficulty, it seems to me, lies in defining the limits of responsibility in a highly connected society. If the person who draws up the timetables that send the trains to Treblinka is responsible, what about the printer who prints the timetables? What about his best friend?

“If the bank where you have your account also invests in the armaments industry, what responsibility do you have? How do you live a moral life?

Gretton accepts that his book, which is essentially a work of creative non-fiction, may not answer those questions.

“This is a visceral book,” he says. “It’s written with passion. It’s about love, it’s about tenderness, it’s about loss, it’s about beauty and of course these other themes are hugely important, the ones we’ve discussed, both historically and today politically.

“But I wanted to write the book with a real amount of space. The most important thing for me is that the readers make their own journeys and reflect on their own lives, the silences within families. We could spend another half an hour talking about the parallels between the silences of countries about their history and the silences of families about family history.”

I You We Them: Journeys Beyond Evil: The Desk Killers in History and Today is published by William Heinemann