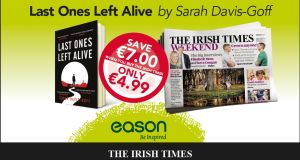 Last Ones Left Alive by Sarah Davis-Goff is the new Irish Times Eason book promotion. Buy the newspaper in any branch tomorrow and you can buy the Tramp Press co-founder’s acclaimed debut novel for just €4.99, a saving of €7. If you still need convincing that this is a bargain worth traversing the country on a life-risking quest for, read our review by Sarah Gilmartin and this essay about it by the author.

There is a wealth of great reading about books in tomorrow’s Irish Times. In the Magazine, Maeve Higgins recalls a strange night at a ball in Manhattan in an exclusive extract from her new book, Maeve in America; Rachael English talks to Róisín Ingle about her new novel, life in RTÉ and the death of her friend Keelin Shanley; and a beautiful piece by Bernadette Fallon about marking a big birthday by asking her friends to gift her their favourite book. In Weekend Review, Naakai Dzole Addy, who is a creative writing student at Trinity College Dublin, describes experiencing racism as an African American living here.

In Ticket, Hilary Mantel talks to Mia Levitin about The Mirror & the Light, the last of her Wolf Hall trilogy; and Lisa Dwan writes about being forced to leave Ireland, working as a publicist for Gerry Adams, and the lessons she takes from a career devoted to the words of Samuel Beckett, in an extract from Europa28, to be published by Comma Press.

Last Sunday, the sixth annual Kate O’Brien Award for a debut book from a female Irish writer was awarded to Nicole Flattery for Show Them a Good Time at the Belltable, Limerick.

The award comes with a €2,000 prize fund sponsored by Riverdance composer Bill Whelan and his wife Denise, a commitment they have made for the next three years.

Vivienne McKechnie, chair of the reader’s panel of the Limerick Literary Festival, said: “Nicole Flattery’s debut collection is clever, strange, funny and cryptic, filled with characters verging on despair, madness, psychosis. But filled with humour, compassion and surprise. A brilliant and unforgettable debut.” The other members of the reader’s panel were Eileen O’Connor, Marie Hackett and Sarah Moore Fitzgerald alongside Donal Ryan and Niall MacMonagle. The other nominees were Sarah Davis Goff, Anne Griffin and Lucy Sweeney Byrne.

The Irish Writers in London Summer School celebrates its 25th anniversary this year and will be formally opened by its new patron, poet and Irish Times critic Martina Evans. With guest speakers including Kit de Waal and Catherine Heaney, it runs from June 4 to July 10th at London Metropolitan University. Find out more here.

The Republic of Consciousness Prize for Small Presses announced its 2020 shortlist. This unique prize, now in its fourth year, rewards the publishers and writers of literary fiction published by presses with fewer than full-time employees. The five books on this year’s shortlist will each receive £1,000, which will be split 65/35 between the publisher and the writer. They are: Animalia by Jean-Baptise Del Amo, translated by Irishman Frank Wynne (Fitzcarraldo Editions); Broken Jaw by Minoli Salgado (the87press); Love by Hanne Ørstavik, tr. Martin Aitken (And Other Stories); Patience by Toby Litt (Galley Beggar Press); and We Are Made of Diamond Stuff by Isabel Waidner (Dostoyevsky Wannabe). The winner will be announced on March 24th. Leonard & Hungry Paul by Rónán Hession, published by Bluemoose Books, had been longlisted.

Coronet has announced that it will publish Graham Norton’s third novel, Home Stretch, this October. Holding, his debut, won the Irish Book Award for Popular Fiction and both it and his second novel, A Keeper, were huge bestsellers both in Britain and Ireland. Home Stretch’s subject, the devastastion caused by a fatal car crash involving five young people in rural Ireland, issur eto resonate. Norton said: Norton said: “Like many, I had always wanted to write a novel, but quietly assumed it would remain an unrealised ambition. I am, therefore, both astonished and delighted to find myself talking about my third book. Home Stretch is my most personal story to date and I look forward to readers meeting these new characters. The choices we make as young people can have long lasting consequences, sometimes unexpected, and often devastating. Home Stretch is a book that begins with a catastrophic accident. Three people survive, but are they really the lucky ones?”

Actor and director Adrian Dunbar, writer Marie Heaney and spoken word artist Felicia Olusanya have launch a fundraising campaign to raise the final €1 million for the development of the Poetry Ireland Centre at 11 Parnell Square East, Dublin 1. It has already secured a commitment of €3.86 million from the Urban Regeneration and Development Fund towards the development of the building, which will house a significant cultural hub for the north inner city.