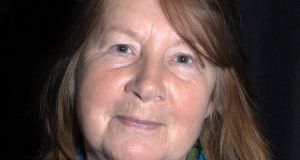 If the death of god put the angels in a strange position, according to Donald Barthelme, Medbh McGuckian’s angels aren’t aware of it. They are “still alert to this church and its clumsy prayer” and the main actors in the beautiful riddling opening poem from Marine Cloud Brightening (Gallery €11.95). Mariola with Angel Choir opens with a hyper-real vision of Jesus crucified “In the shrill turquoise air/of first century Palestine/the rough-hewn cross is already/ regenerating”. This is familiar McGuckian territory with its erotic saviour, “Jesus’s lips are a winestock:/his Z bend, the ropelike winding/of his legs are provocations/ to the senses”. The alphabet signals that language – always one of McGuckian’s primary concerns – is a vital angelic function, “their dazzling, swift and powerful/intelligences sharpening language//with their final vocabularies”. Almost Lost Poem follows with the haunting question:

How can we say something new
with old words? Nothing is flatter
than words on a piece of paper

McGuckian’s poems have been, from their beginning, in an intense conversation with dead writers, such as Marina Tsvetaeva, Rilke and Mandelstam, often borrowing their words. Now death has touched her own circle. The mysterious Inside a Slashed Tennis Ball recalls Ciaran Carson’s The Irish for No? but some responses – in particular Elegy after Dennis O’Driscoll – are unusually direct, forming a poignant counterpoint to the mysteries as McGuckian steps out from behind her mask, “No one thought to tell me except Tess;/perhaps they thought such news would break my heart . . . I ring Peter to ask for Julie’s number”.

Equally direct and harrowing is The Decision to Kill John, the elephant starved to death in Tokyo Zoo, one of a number of poems concerned with the human race’s destructive influence on the planet. Always the neat borrower, McGuckian’s title Marine Cloud Brightening is actually a climate engineering proposal for manipulating cloud cover to offset global warning. “There may be weapon wars/as we weaponise weather.” More relevant than ever, eerily prescient, McGuckian continues her unique mining of verbal language.

Moyra Donaldson’s sun-lit photo on the back of Carnivorous (Doire, €12/£9) shows her hands resting on a horse’s back, the mane crinkled, damp and real-looking almost as if we could touch it. This speaker feels real too:

I do not accidentally come across them
in misty fields, or in old gateways,
I’m aware of where they are
I also know how much they piss and shit.
I’ve wheeled thousands of barrow-loads
of dung to the muck heap.
(Not Metaphors)

The burden which humans have placed on horses, “the beaten horse”, is deeply felt in Return. Not Metaphors goes one step further, flinging back the weight of our psychological projections:

My horses are schooled and taught
to carry themselves properly. . .
. . . leave the poles up.
That’s a lot of work for me and my horses
and sometimes we make mistakes –
fall and get hurt; actually hurt.

This deeply considered anthropomorphic collection juggles practical life alongside the spirit world, wounds of recent history and the loss of one special companion. Each Year I Do The Fence, Donaldson’s prosaic – “cannot all be mended, there’s/algae, splitting, looseness/I tie back my hair and get on” – is undercut by visionary poems like Drumhirk Farm: All Souls’ Night, where “no one left alive in this house now” as the speaker’s mother sleeps under brilliant blue and gold butterflies. My Mother’s Coat is a very seductive poem; “silk lining/around my body, caressing/the tight unyielding curls” but it takes 30 Persian lambs to make one coat, “ideally foetal,/so as to have that deep blackness”. The animals are often totem-like: the crow a constant motif, the buzzard circles twice, a harbinger evoking the title. But horses carry the most weight here especially one unforgettable horse, “his desperate/lurching refusal to stay down though/unable to stay up” after his final “sky-blue injection”:

All the regret for every hurt I’ve ever caused,
sadness for every thing I’ve ever lost,
is pouring through this rent, that wound,
his drawn-back lips, his emptied eyes.
(Irrevocable Things)

Raymond Antrobus’s The Perseverance (Penned in the Margins £9.99), is preoccupied with form yet this is no tyro trying out steps. Circular, repeating forms are crisp outlines for his complex themes, most notably his expression of a ring-bound grief for his father. The abstract truth of The Perseverance is grounded in the Hackney pub where Antrobus’s father drank. Anyone who’s waited for a drinker will recognise the endless circling of the title sestina:

We’ve been here before,
no such thing as too much laughter
unless you’re my mother without my father,
working weekends while THE PERSEVERANCE
spits him out for a minute.
He gives me 50p to help make me disappear.

Echo uses exposition, BSL illustrations, anaphora and fine lyrics, “My ear amps whistle as if singing/to Echo, Goddess of Noise”. It asks “What language would we speak without ears?” A well-earned question for a cruelly-delayed diagnoses:

. . . no one knew what I was missing
until a doctor gave me a handful of Lego
and said to put a brick on the table
every time I heard a sound.

After the test, I still held enough bricks
in my hand to build a house
and call it my sanctuary.

Antrobus’s mercurial father is always associated with “laughter” – from the title sestina to the pantoum, Happy Birthday Moon where he “laughs” twice. And pain powers the humour in the ghazal, Jamaican British:

In school I fought a boy in the lunch hall – Jamaican.
At home, told Dad, I hate dem, all dem Jamaicans – I’m British.
He laughed, said, you cannot love sugar and hate your sweetness,
took me straight to Jamaica – passport: British.

This inherited hard-won humour is Antrobus’s fingerprint  -  the fight-back answer to a rampantly racist world where the deaf are marginalised. Most people don’t listen. Antrobus, however, is listening with everything he’s got:

Even though I have not heard
the golden decibel of angels,
I have been living in a noiseless
palace where the doorbell is pulsating
light and I am able to answer.

Tiger King: Before long I was calling myself Pat Exotic, Cat King of Marino
2