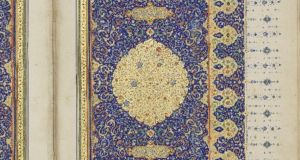 A page from the Chester Beatty’s Ruzbihan Qur’an

The Islamic Collections of the Chester Beatty Library are among the finest in existence, and are internationally renowned for their high quality. The library’s 16th-century Ruzbihan Qur’an, produced in the city of Shiraz in southwest Iran, is one of the most splendid Islamic manuscripts known. The most detailed and comprehensive study of any Islamic manuscript has been published by Paul Hoberton publishing. The study was done by Dr Elaine Wright, the former curator of Islamic collections at Chester Beatty.

In 1950, the American mining engineer and philanthropist Alfred Chester Beatty moved to Dublin from London, where he had resided since 1913. He died in 1968, a few weeks before his 93rd birthday, bequeathing his collection – then housed in his library on Shrewsbury Road in Ballsbridge – to a trust for the ‘use and enjoyment of the Public’. Today, the Chester Beatty Library is situated in the Clock Tower Building of Dublin Castle, functioning primarily as a museum, with galleries in which the collection is on public display.

Chester Beatty was noted for having a very fine eye and he made a point of purchasing only the finest material for his library. Perhaps not surprisingly, therefore, the library’s Islamic collection is internationally regarded as one of the world’s finest. Overall, the collection consists of more than 6,000 individual works, primarily manuscripts and single folios (of calligraphy and paintings) but also a small number of objects (mainly lacquer pen- and mirror-cases, scientific instruments – quadrants and one astrolabe – and a fine collection of detached book bindings). Of the manuscripts, the more than 260 Qur’ans (both complete and fragmentary manuscripts) are of especial importance. One of the finest manuscripts of the collection – and one of the finest ever produced – is a large and lavishly illuminated Qur’an, purchased by Chester Beatty in the late 1920s and generally known as the Ruzbihan Qur’an, named for the calligrapher, Ruzbihan Muhammad al-Tab’i al-Shirazi, who copied out the text of the 445-folio (890-page) manuscript.

Praised in a late 16th-century treatise as one of the finest calligraphers of his time, Ruzbihan would have produced numerous Qur’ans during the course of his career, but only five signed by him have survived, of which the Chester Betty manuscript is surely his finest. However, equally deserving of praise is the team of highly skilled, yet anonymous, artists responsible for the manuscript’s decorative programme, the combined quality, extent, diversity and complexity of which sets the manuscript apart from almost all others of its time. The manuscript is not dated, but work on it probably began about 1550.

Lapis and Gold, Exploring Chester Beatty’s Ruzbihan Qur’an is the most detailed and comprehensive study of any Islamic manuscript to date. The discussion follows the order in which work on the manuscript would have progressed, beginning with chapters on the writing, reading and recitation of the holy text. Problems encountered by the calligrapher are examined, such as the correct spacing of the text as well as textual errors and omissions made by him and the ways in which he resolved these problems. Fittingly, the bulk of the study focuses on the manuscript’s superb illuminations, both major elements, such as its lavish frontis- and finispiece, and seemingly minor elements, such as the colourful frames that surround almost every element and the tiny ‘squiggles and eyes’, which, hidden amongst the illuminations, appear to function as a sort of artist’s hide-and-seek.

Lapis lazuli and gold, the two most expensive pigments available to artists of the time, are used on every page of the manuscript – and the book includes a discussion (by Kristine Rose Beers, senior conservator at the Chester Beatty) of these and other pigments employed by the artists. Much of the discussion is the result of close examination of the manuscript under high magnification, which often revealed surprising and previously unknown aspects of production. Of particular note is the unusually fine rendering of even the most minute motif. Surprising and never-before-seen techniques of production are revealed, such as the use of ‘pasted-on’ panels of paper and the two-step process involved in the painting of blossoms a mere half centimetre long. But one mystery remains, namely, the reason for the startling change in aesthetic evident in the illuminations of the final 10 openings of the manuscript.

Illuminated headings and certain panels of calligraphy are reproduced the actual size they are in the manuscript, but many other of the 430 colour illustrations included in the book are enlargements of minute details of the decoration, which, in ‘real life’, are difficult, or even impossible, to see clearly with the unaided eye. Through the illustrations and discussion, the reader will learn much about the Qur’an, as well as much about the processes and procedures involved in the production of Islamic manuscripts. In particular, the reader will quickly come to realise that Chester Beatty’s Ruzbihan Qur’an is a very special and intriguing manuscript.

Lapis and Gold, Exploring Chester Beatty’s Ruzbihan Qur’an by Elaine Wright is published by Ad Ilissum/Paul Holberton Publishing, London and is available in the Chester Beatty Library shop and through Amazon