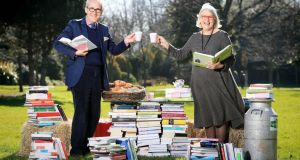 Celebrating the announcement of the three-year sponsorship of the Ballymaloe Litfest by Kerrygold, with a cup of tea and some hot buttered scones, are festival directors Rory O’Connell and Darina Allen. The Kerrygold Ballymaloe LitFest takes place from May 16th-18th. Photograph: Marc O’Sullivan

The 2nd annual Ballymaloe Literary Festival of Food & Wine is to be sponsored for the next three years by Kerrygold.

Kevin Lane, CEO of the Irish Dairy Board, said: “This festival resonates so well with what we value most at Kerrygold and why consumers around the world love Irish dairy products. It’s quite simple – we both value products that are natural, pure and full of goodness. And, of course, with Ireland being the home of literary masters, the marriage of food and words makes such a natural fit.”

Ireland’s only festival dedicated to food and wine writing, the Kerrygold Ballymaloe LitFest runs from May 16th to May 18th. Contact 021 4645777 or litfest.ie