The Siege of Krishnapur was shaped by a cholera pandemic; its author formed by polio 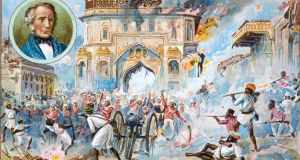 “As cholera began its measured advance through the garrison ...”

A pandemic like cholera was not at the forefront of JG Farrell’s mind in 1971 when he began to envisage Difficulties, the book that would become The Siege of Krishnapur. (Troubles was the previous novel in his Empire Trilogy.)

Indeed, India itself took time to emerge as the setting, but his childhood legacy of vivid first-hand accounts of daily life there from both his parents, who had moved back to England by the time of his birth, gradually built up a momentum towards specific research.

His original ambition was to match the achievement of Camus in La Peste, with which The Siege of Krishnapur shares a strong moral base, but the huge fictional creation of a city swept by plague was discouraging in the extreme. It was the discovery in the British Museum one day of a diary kept by a survivor of the 1857 siege of Lucknow that suddenly inspired a more practical plot.

‘’I actually started off looking for a general situation for the kind of novel that I wanted to write,” he explained a few years later, when interviewed by Julian Symons on BBC2’s Book Programme in May 1975. “In other words, I knew that I wanted an enclosed situation where it would be fairly easy to get my characters to meet each other. I also wanted some sort of tension involved – and a siege, of course, is absolutely ideal for this.”

The kind of novel he wanted to write, he elaborated when pressed, was to use a period of the past as a metaphor for today. “ I believe,” he said firmly, “that however much the superficial detail and customs of life may change over the years, basically life itself does not change very much.”

With the outline now of a siege to work within, he was faced with the need to introduce debate and conflicting opinions among the diverse characters about to take shape in his mind. 1857 was on the cusp of rapid scientific advance, and Farrell was aware of living himself at such an unsettling time, with widespread public disquiet at the revolutionary discoveries in molecular biology and systematic unravelling of the genetic code. At heart, his book was to be about the failure of 19th-century pragmatism and rationalism, and with his customary light touch he intended to write a satire of ideas.

“I wanted to show people at the time of the mutiny who were having bitter arguments about ideas that we no longer find of crucial importance at all,” he once confided. Phrenology was one such subject, and he saved it for lesser discussion, but it was far too narrow for his intended theme. And then, browsing by chance on a street book barrow near the Houses of Parliament, he came across several mid-Victorian volumes of the British Medical Journal pinpointing the rival professional theories about the causes of cholera epidemics, from which 20th-century hindsight clearly identified the right from the wrong. It was a “Eureka!” moment, and he bought them on the spot.

“The opportunity to show a sound idea, subsequently proved to be correct, getting a rough reception from stubborn, disbelieving colleagues,” he told Symons, “was too good to resist.” By assigning notions that were equally misguided to characters with whose thought processes modern readers would still identify, he hoped that current certainties, too, could be questioned. Cholera was an eminently suitable casus belli. Now all the medical controversy he needed was to hand, described in the true voice of the time, to be used as he wished. There was no need for more clinical opinion.

When he travelled to India after the first draft was completed, though, his curiosity about cholera and its symptoms remained. Diary entry, 22 February 1971. “This morning at breakfast the waiter standing behind my chair suddenly stepped forward to tell me he had a headache... I recovered from my surprise and told him to come to my room for some aspirin. He did so. Gave him the tablets. He staggered away theatrically, lurching and clutching his brow. I hope at any rate that it was theatrical. I had noticed vaguely before how thin he was. His face is little more than a skull with skin and some black beard on it.... At lunch he came up to me, wreathed in smiles, fully recovered. I’ve been thinking of using this incident... substituting whatever the Victorians used for headaches, sal volatile, perhaps, or laudanum.”

Jim Farrell, of course, was well-equipped to write about the spread of potentially fatal disease, having personally experienced the tail-end of the polio epidemic, leading to months in an iron lung, during his first year at Oxford in 1956/7. He never regained full health, with his breathing most affected, and transience underscores each book in the Empire Trilogy; it is more apparent still in an earlier novel, The Lung (at present out of print).

As a direct result, he was drawn particularly to doctors, whom he genuinely admired, leading to close – but not confessional – friendships with several; the majority, in turn, saw in him lingering traces of what would now be called Post Traumatic Stress Disorder. That, subconsciously, influenced his books.

A more deliberate intention was to recreate for readers a frisson of the horror that he had faced himself. “What I like to do,” as he put it, “is to lull the reader into a sense of false security. Bring him into a situation which he thinks he recognises and then slowly take out the props and leave him in a world that, I hope anyway, is a new experience for him.”

Anne Enright, a fellow Booker winner, has described how listening to an arts programme on her car radio while driving alone gave her an unexpected insight into his writing, when a contributor spoke indelibly about writers and death. “He said that writers have a privileged relationship with death,” she recounted at a book launch. “JG Farrell fits into that category – the writer who died before his time. I thought about another category, the writer who has died already or feels that he has. The child with rheumatic fever, the adolescent with TB. Imaginations that are forced by illness and isolation and by being at the very end of things.

“It is the sense of protraction, of radical uncertainty, that makes The Siege of Krishnapur unbearable and so funny, as severe as it is remarkable. Farrell knew that even if you struggle, even if you are at the very centre of the drama, as we all are, you can still die, stupidly or simply for no reason at all. He also knew what it was to survive.”

Here are just three examples of his survivor’s awareness of transience, among many to be found in his books. In Troubles, Major Brendan Archer, the chief character, is a postwar veteran of the trenches at the Somme. “When [his aunt] invited some young ladies to tea he dismayed everyone by the hungry attention with which he stared at their heads, their legs, their arms. He was thinking: ‘How firm and solid they look, but how easily they come away from the body!’” The elderly Dr Ryan, subsequently encountered by the Major in Ireland, is similarly perceptive. “Strange... to think that a beautiful woman who seemed like a solid thing, solid as granite, was really no more solid than a flaring match, a burst of flame, darkness before and darkness after. People are insubstantial, they never last.”

And when writing The Siege of Krishnapur Farrell faced his own transience, with resignation. “A lamp was burning in his study and in the glass of the bookcases he saw his own image, ... anonymous, the face of a man like other men, who in a few years would be lost to history, whose personality would be no more individual than the shadowy reflection in the glass.”

Resignation, certainly, yet also a fierce determination, while he was still alive, to leave behind an achievement of lasting value; his exemplar, always, was Tolstoy. Once committed to the Indian Mutiny setting of The Siege of Krishnapur, and to all the serious and humorous unfolding possibilities of his plot in which a pandemic plays so crucial a part, his unique imagination created a book that nearly 50 years on contradicts that latter pessimistic self-portrait. As international sales figures prove, the name JG Farrell is more widely recognised today than ever.
This article by Lavinia Greacen, author of JGFarrell: The Making of a Writer, was first published in the Journal of Epidemiology.