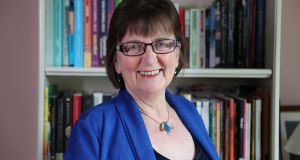 I live under an invisibility cloak. Not just me. There are others as well but you probably haven’t noticed us. Let me explain ...

From as far back as I can remember my life has been about books – books in English, books as Gaeilge. I was only three years old when I first went to school in a small rural school in Co Tipperary. My parents were teachers. My mother needed to go back to work so my father took me with him to his school. Since I was too young to start officially, I sat beside my big sister in the master’s classroom.

My earliest memory is of fifth and sixth class reading Jimín Mháire Thaidhg. The children took turns to read it aloud while my father illustrated Jimín’s antics with coloured chalks on the blackboard. From that moment on, books were my world.

I remember my sister reading to me as a child and looking over her shoulder and recognising the shape of words on the page. I have no recollection of the story itself but I know, for certain, that the first words I read independently were the final words in the story: “And that was that.” As far as I was concerned, that was definitely that. I would read and read and read and – some day – I would write my own story.

Little did I know that one book would lead to the next and that one day, I would be appointed Laureate na nÓg. I am honoured and humbled. I am excited beyond belief and I look forward to sharing my passion for reading and writing with children, parents, teachers and writers everywhere.

As a child, the furthest we ever travelled on holidays was Conamara. However, I travelled the whole world in books. I read everything I could lay my hands on. I lived in the stories and invented new stories. I read poetry and wrote my own poems in my head. As a teenager, I filled notebooks with angst-ridden verse. I couldn’t survive without books and words, without poetry and story.

I hope there’s less angst in my work now – but I still couldn’t survive without poetry and story.

I’m lucky to be able to devote so much of my life to books and writing. When my children were young, I juggled part-time work outside the home, child rearing and writing. I set up a desk in the kitchen and frequently wrote while cooking dinner or helping with homework (or even both).

I read to my three sons at night – sometimes together, sometimes three books on the go. I told them stories, I tried out my own stories on them. When they were asleep I often sat down to finish a story or a half-written poem.

Although I have spent much of my adult life writing children’s books and doing creative writing workshops with young people, I have worked, for the most part, under an invisibility cloak. Why? It’s simple. I, and others like me, write as Gaeilge.

The world of Irish language children’s books is a vibrant world with amazing books for readers of all ages. However, in the part-time work I do with trainee primary teachers I am often shocked at the number who have never read a book as Gaeilge for pleasure. Some have read textbooks or excerpts from Irish language books in school, but never at home and never, ever for pleasure.

In creative writing workshops in Gaelscoileanna, children often tell me that they love reading books as Gaeilge in school – but outside the school gate the invisibility cloak seems to drop again.

I believe that our children deserve better. During my term as Laureate I hope to encourage reading and writing for pleasure in all languages – but especially as Gaeilge. I want to bring Irish language children’s books into the mainstream conversation. I want Irish language writers to have a seat at the main table.

Working with Children’s Books Ireland over the next two years, a Bosca Leabharlainne project will be rolled out. This Bosca Leabharlainne will contain a small selection of high quality, original books as Gaeilge and will be available to as many primary schools as possible.

My passion, my dream is language and literature equality both for children and for Irish language writers. I will be calling on booksellers and librarians to get on board to bring reading for pleasure as Gaeilge beyond the classroom.

Over the next two years, let’s lift the invisibility cloak off Irish language children’s books. Let’s bridge the gap in children’s reading lives.

Áine Ní Ghlinn is the first author writing exclusively in Irish to be appointed Laureate na nÓg, and will hold the title until 2022. She has written 26 books for children, including stories and novels for all ages, as well as poetry and drama.

From Co Tipperary, Ní Ghlinn worked for RTÉ and Raidió na Gaeltachta as a journalist, and now divides her time between writing, delivering creative writing workshops in schools, and part-time lecturing in Dublin City University. Her books have won the Gradam Reics Carló Book of the Year Award three times, most recently in 2019 for her novel Boscadán. In 2015, her YA novel Daideo won the Honour Award for Fiction at the Children’s Books Ireland Book of the Year Awards, as well as the Literacy Association of Ireland Book of the Year.

Ní Ghlinn is a former chair of the Children’s Books Ireland Book of the Year Awards.

If you have never read an Irish book for pleasure, Bliain na nAmhrán (Futa Fata) is a brilliant place to start. I have great memories of my children singing rhymes and songs in the car on the way to school while the one in the middle held the book. Bliain na nAmhrán is a spectacular collection of stunningly illustrated songs for all seasons composed by Tadhg Mac Dhonnagáin. With a sing-along CD, it won multiple awards and is perfect for the car or kitchen.

My personal favourites include Ná Gabh ar Scoil by Máire Zepf and Tarsila Krüse which tells the story of little Cóilín who is excited at the prospect of starting school. Mammy, however, has issues around letting him go.

Scúnc agus Smúirín by Muireann Ní Chíobháin and Paddy Donnelly is a heart-warming story of Little Scúnc (Skunk) who can’t find his Smúirín (Sniffy) with its comforting smell.

In Beag Bídeach by Sadhbh Devlin and Róisín Hahessy, Nina escapes from her annoying little brother into her dolls’ house, only to discover that unresponsive dolls and plastic food aren’t as much fun as she had hoped.

Allowing for varied levels of Gaeilge the books above are all broadly suited to ages 3-8.

Mór agus Muilc (Éabhlóid) by John Óg Hiúdaí Neidí Ó Colla, stunningly illustrated by Kim Sharkey is based on a traditional folk tale from Donegal. A story of life and death (for readers under 10) we leave with the moral of not always believing what you hear.

Two of my favourite collections of all time for young readers centre on characters who break every mould. Mary Arrigan’s Mamó series (An Gúm) is about an adventurous granny who brings chaos wherever she goes. With no respect for rules, you can find her dancing on the clothesline, swinging on the trapeze, or feeding sausages to the horrified pigs, (age 3-8).

Colmán Ó Raghallaigh’s inimitable Ruairí series (Cló Mhaigh Eo) is about a lovable rógaire who, despite his best efforts, never manages to get it right. Whether in school or at the zoo, every day is a drochlá do Ruairí bocht. Even the simplest Ruairí stories will entertain children up to 9-10 years.

Belfast-based An tSnáthaid Mhór publishes illustrated books for all ages. Ó Chrann go Crann by Caitríona Hastings and Andrew Whitson is a superbly illustrated, tender story about a child coping with change. For the more confident reader, Patricia Forde’s Ar Strae, illustrated by John White (Futa Fata) follows the life of a young Syrian refugee living with his mother in a converted hotel. Still waiting for news of his father and for permission to stay in Ireland, Nizar befriends a stray dog.

For the very confident reader, Scéalta le hInsint don Ghealach (Cois Life) is a modern retelling by Caoimhe Nic Lochlainn and illustrated by Olivia Golden, of traditional stories. Featured on the iBbY Honour List 2020, many of these entertaining stories are based on manuscripts from the National Folklore Collection.