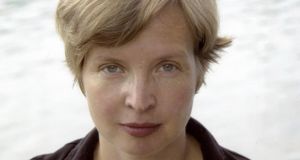 Jenny Erpenbeck, described by Michel Faber as “one of the finest, most exciting authors alive” shares the £10,000 prize with her translator, Susan Bernofsky

The End of Days by Jenny Erpenbeck, published by Portobello, has won the Independent Foreign Fiction Prize.

Erpenbeck, described by Michel Faber as “one of the finest, most exciting authors alive” shares the £10,000 with her translator, Susan Bernofsky. They were presented with the prize at an award ceremony at the Royal Institute of British Architects in London this evening, Wednesday, May 27th.

Having been longlisted for the Independent Foreign Fiction Prize in 2001 for The Old Child, The Book of Words and then shortlisted in 2011 with her novel Visitation, Erpenbeck is the only living German author to have won the prize in its 25-year history. WG Sebald (Austerlitz which won in 2002) and Gert Hofmann (The Film Explainer, won in 1995) were both awarded the prize posthumously.

The End of Days is a story of the 20th century traced through the various possible lives of one woman. Moving from a small Galician town at the turn of the century, through prewar Vienna and Stalin’s Moscow to present-day Berlin, Erpenbeck homes in on the moments when life follows a particular branch and “fate” suddenly emerges from the sly interplay between history, character and pure chance. Described by judge Antonia Lloyd Jones as “a work of genius”, it offers a unique view on 20th-century history.

Judge Boyd Tonkin said of the winner: “This is a novel to enjoy, to cherish, and to revisit many times. Into its brief span Jenny Erpenbeck packs a century of upheaval, always rooted in the chances and choices of one woman’s life. It is both written and translated with an almost uncanny beauty, which grows not out of historical abstractions but from the shocks and hopes of everyday life, and from our common quest for peace, home and love. Re-reading this jewel of a book, I came to feel as if both WG Sebald and Virginia Woolf would recognise a kindred spirit here.”

Now a bestseller in Europe, The End of Days has already received much praise and admiration. It won the prestigious Hans Fallada Prize and has been endorsed as part of the English PEN Writers in Translation programme, celebrating its 10th birthday this year. Susan Bernofsky first encountered Erpenbeck’s work on a translator’s study tour around Germany. She picked up a copy of her first book (Geschichte vom alten Kind) when they visited her then publisher, Eichborn, in Frankfurt, and “spent the rest of the trip raving about it”. She said: “Jenny’s lyrical style bears uncanny similarities to the way I myself write in English, and translating her prose always feels like a homecoming. The End of Days is our fourth book together, and I consider it her strongest to date. It was a challenge-but also fun-to translate the many different voices in the book’s various chapters, each of which represents a distinct era.”

Antonia Byatt, Arts Council England’s director of literature, said: “The End of Days is a truly remarkable novel, taking the reader on an imaginative journey across countries and continents, tracing the major historical events of twentieth-century Europe through the life (or should that be lives?) of one woman, born at the edge of the Austro-Hungarian empire as the century begins. With an invigorating structure and a varied prose style – sometimes crisp, in other parts more allusive and sinuous - this book explores ideas of time, memory and family, and reveals that what we might term ‘fate’ or ‘chance’ can pivot on the smallest of circumstances yet have an enormous effect on the course of a life, or even bring it to an abrupt end. Jenny Erpenbeck is a worthy winner of this year’s prize and her lucid prose is matched by Susan Bernofsky’s wonderful translati

The judges also gave special mention to In the Beginning Was the Sea, the debut novel by Colombian writer Tomás González, translated by Irishman Frank Wynne. First published in 1983 by a nightclub where the author worked as a barman, this novel was published into English by Pushkin Press over 30 years later. Based on a true story, In the Beginning Was the Sea gives a dramatic and searingly ironic account of the disastrous encounter of the imagined life with reality. Helen Oyeyemi described the book as “quietly profound, finely wrought and containing a wave-like motion within its prose”.

Erpenbeck was born in East Berlin in 1967. She has worked on opera and musical productions and her fiction has been translated into 14 languages worldwide. She is the author of The Old Child, The Book of Words (longlisted for the 2001 IFFP), and Visitation which was shortlisted for the 2011 Independent Foreign Fiction Prize.

Bernofsky is a translator and author. She directs the literary translation program in the School of the Arts MFA Program in Writing at Columbia University. She has translated over 20 books and her awards include a Guggenheim Fellowship in 2014, as well as the 2006 Helen and Kurt Wolff Translation Prize and the 2012 Hermann Hesse Translation Prize.