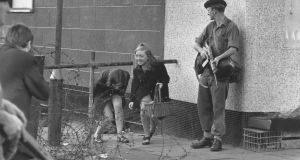 Two young women negotiate a barricade next to an armed soldier on the Falls Road, Belfast in 1969. Photograph: Evening Standard/Getty Images 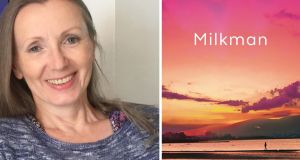 Anna Burns’s Milkman, a very deserving candidate for the 2018 Man Booker Prize, is a strange, uncanny tale set in Belfast (although the city is never named) about a young woman trying to avoid the insistent and unwelcome sexual advances of a senior paramilitary figure, “the milkman”.

The novel is an unusual and beguiling piece of prose. It’s a novel about failing to remember and failing to forget; failing to speak and failing to remain silent. It is much more than a novel about Belfast and much more than a sinister take on the dynamics of an older man’s obsession for a much younger woman. Burns is astonishingly astute about the insidious ways that men coerce women and how women are trained to silence and second-guess their instincts about men – “he didn’t seem rude, so I couldn’t be rude”.

Throughout Milkman, lust and desire are threatening, inescapable and habitually tinged with violence. The unnamed narrator, known only as “middle sister”, cannot love the man she chooses, her “maybe-boyfriend”, because the milkman has made thinly-veiled threats to kill him. The milkman’s intimidating advances to the central character are entirely unwanted but, elsewhere in the novel, the longing she has for her “maybe-boyfriend” is also “dangerous, always dangerous”.

In the novel, sexual desire – even when part of a consensual relationship – is frequently associated with fear. Burns’s twinning of desire and danger is interesting when considered as part of a lengthier tradition of Irish writing. Illicit, forbidden and dangerous longing is a stalwart of Irish literary and cultural history, and there are literally hundreds of stories of Irish (and British, which I’ll get to) characters pursuing people they absolutely shouldn’t at great cost. These stories that fuse love or lust with peril are deeply revealing about history and politics in Ireland at particular moments.

Such narratives have a very long lineage. Ancient Irish myths are full of lovers behaving badly and falling for people who are strictly off limits. Very young women are routinely pledged to much older men and when they fall for someone else, which they nearly always do, this usually ends in chaos and tragedy. From Deirdre and Naoise, to Gráinne and Diarmuid, and Tristan and Iseult, the stage was very much set for the enduring appeal of furtive, and often fatal, romances. After all, such stories offer everything we want: sex, violence and drama.

There’s also an argument that a heady mix of infidelity, betrayal and politics led to the beginning of the Anglo-Norman conquest of Ireland. Diarmait Mac Murchada (c.1110-1171) was dispossessed of his kingdom following his abduction of Derbforgaill, the wife of Tiernan O’Rourke. To get his land back, he enlisted the military aid of the Anglo-Norman Earl Richard de Clare (alias Strongbow), promising his daughter, Aoife, and the kingship of Leinster in exchange. When Mac Murchada died, the second, and much larger, Norman invasion of Ireland took place. This romantic transgression looms large in the Irish imagination. Joyce makes a throwaway reference to Mac Murchada and Derbforgaill in the Cyclops episode of Ulysses and Daniel Maclise’s painting, The Marriage of Strongbow and Aoife (1854), hangs in pride of place in the Millennium Wing of the National Gallery of Ireland in Dublin.

Strongbow and Aoife are an early example of the now ubiquitous “love across the divide”: a type of romance narrative that took a decidedly political turn after the Act of Union, when Ireland became a part of the UK. As historian Roy Foster argued in Paddy and Mr Punch: Connections in Irish and English History, the relationship between Britain and Ireland has been fashioned in a “brutally simple” way: “colonization as rape, [the act of] union as shotgun marriage”. In the years following the union, Ireland saw a rise in “national tales”, such as Sydney Owenson’s The Wild Irish Girl (1806). These novels typically involve a marriage plot – almost exclusively between a Catholic Irish woman and a Protestant Anglo-Irish or British man – signalling the union between the two nations. Such “national romance” allegories, often uneasy and contradictory, tended to rely on the association of Ireland with the female: an association curiously forged by both English imperialism and the Irish themselves. In these novels, the intoxicating thrill of a love story that cuts across social boundaries sets out to achieve some serious political and nation-building work.

Attempts have continued unabated since the rise of the national tale to depict Ireland’s difficult and intimate relationship with Britain as a (sexually) frustrated and dangerous romance between lovers from “opposing sides”. These types of stories became increasingly common with the partition of Ireland and as the euphemistically named Troubles escalated in violence and terror in the latter decades of the twentieth century. We can see this trend across TV, film, novels, theatre and poetry. Seamus Heaney, for example, wrote several poems engaging with this, including Act of Union and Punishment (both from his 1975 collection, North), about a young woman who has been tarred and feathered as punishment for her relationship with a British solider. Anne Devlin’s short story, Naming the Names, from her 1986 collection, The Way-Paver, gives us another version of the trope via a “honeytrap” narrative. Brian Friel’s Translations (1980), where an Irish woman falls for an English soldier in the 1830s, recently enjoyed an all-star revival at the National Theatre in London. We can read these love stories as being a fundamental exploration about the legitimacy of the Northern statelet and the ongoing national struggle within its borders.

But what does Milkman have to do with this tradition? While our unnamed narrator is fiercely aware of the dangers of prohibited romance – suitors must be of the “right religion” and her elder sister “brought disgrace upon the family” by “marrying-out to some state-forces person” – her omniscient admirer is from within her community.

In Milkman, romantic and sexual desire is something deeply troubling; in addition to the milkman himself, the British military sexually harass republican women and our narrator is aggressively pursued at points by “Somebody McSomebody”, a “grudge-bearing, stalker type” who won’t take no for an answer (you can see why reviewers have highlighted the relevance of the novel in our #MeToo moment). We might read Milkman alongside another body of Troubles fiction that presents us with love stories couched in the danger and allure of the forbidden “love across the divide” narrative, but where the lovers are not from opposing groups at all. Bernard MacLaverty’s Cal (1983) is an excellent example of this, as is Robert McLiam Wilson’s novel Eureka Street (1996).

Eureka Street may open with the line “All stories are love stories”, but what these romances really tell us is about how people negotiate their everyday existence in an extremely hostile and difficult environment. Milkman reveals just how relentlessly oppressive Belfast really was in the 1970s: particularly in certain communities, particularly for women and particularly for young women.

But Burns’s novel also makes a searing commentary on the conservative political climate of 2018 and the domestic debris that decades of conflict have left in their wake. Love and desire in the North are still intensely political. There has been a surge of writing from the North, as the academic Caroline Magennis has noted, thinking through intimacy, love, sex and desire. Women writers are at the forefront of this boom, and important works include Bernie McGill’s Sleepwalkers (2013), Rosemary Jenkinson’s Aphrodite’s Kiss (2016) and Roisín O’Donnell’s Wild Quiet (2016). Lucy Caldwell’s Multitudes (2016) has several stories about how and whom we should be able to love, from mixed race to same-sex couples.

There is much anxiety in Milkman about men living with men, “mixed-religion” couples, and “unmarried couples”. At one point, a knowing comment is made that “Marriage after territorial boundaries, is the foundation of the state”. In 2018, same-sex couples in the North are still denied the right to marry; the most recent attempt to change this was vetoed by a petition of concern by the DUP – a direct legacy of the Troubles. For Northern Ireland is still a state that legislatively restricts the ways people can love even if, culturally at least, things are changing. Burns’s novel is, for all its darkness, ultimately hopeful about the future imagined and represented in the strong, intelligent and brave young woman at its centre.
Dr Alison Garden is a Marie Skodowska-Curie Fellow at Queen’s University, Belfast. Her first book, The Afterlives of Roger Casement, is forthcoming with Liverpool University Press. You can learn more about her research at alisongarden.com and follow her on Twitter at @NotSecretGarden