In CBI’s good books – just not in its excellent books

Children’s Books Ireland will shortly announce this year’s winners of its annual awards. The shortlist suggests that excellence is becoming harder to find 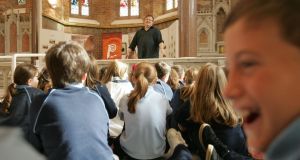 The winners of this year’s Children’s Books Ireland awards will be announced on May 13th. From the 70 or so books submitted by their publishers, the judging panel has nominated a shortlist of eight, all of them, presumably, felt to fulfil CBI’s aspiration that the awards will celebrate excellence in Irish children’s literature. The tricky question of what constitutes excellence, in this context, will give rise to a fair amount of lively and healthy argument.

Before coming to the individual titles on the list, it is interesting to consider some of its general features. Last year’s shortlist of 10 titles now becomes eight. Of these eight, seven have been written or illustrated by previous award winners. Only one title comes from an Irish publisher. There are no Irish-language books. The Eilís Dillon First Time Book award will this year be withheld, as no “first time” book submitted has been considered worthy of inclusion.

Depending on one’s perspective, each of these developments could serve as starting point for speculation about the state of contemporary Irish writing, illustration and publishing for the young. Taken together, they seem to suggest that, at least for the judges, excellence is becoming more difficult to find.

There is nothing wrong in the promotion of material that is perceived to exemplify the highest standards of literary and artistic attainment, but it is a strange shortlist of the “best” of the Irish children’s books of 2013 that does not include Alan Early’s Arthur Quinn and Hell’s Keeper or Natasha Mac a’Bháird’s Missing Ellen .

It also seems strange that the Derek Landy novel included on the shortlist, Skulduggery Pleasant: Last Stand of Dead Men , should have been preferred over his other eligible title, The Maleficent Seven , which, in addition to skilfully handling the usual Landy mixture of the gruesome and the grotesque, is much more witty and entertaining, complete with some excellent banter and one-liners.

So, come May 13th, who goes home with the five CBI awards?

Two of Ireland’s most highly regarded artists will be in direct competition for the Honour Award for illustration: Oliver Jeffers for The Day the Crayons Quit (text by Drew Daywalt) and PJ Lynch for Mysterious Traveller (text by Mal Peet and Elspeth Graham). The former’s artwork is humorous, joyous and mischievous; the latter’s is stylish, evocative and poignant. Either would be a deserving winner, but Jeffers would get my vote by the narrowest of margins.

The Honour Award for fiction, to be chosen from six shortlisted titles, will be hotly contested. The nominated books offer a commendably wide range of period, setting, characterisation, theme and style, and it can be easily argued that not one of them is without considerable merit.

The already mentioned Derek Landy title will be joined by Eoin Colfer’s W.A.R.P: The Reluctant Assassin , expertly shifting between the Londons of “Now” and of 1898 and full of inventiveness and dramatic action. Again set in London, Marie-Louise Fitzpatrick’s Hagwitch moves between the 16th century and the present, the themes linked by the narrative’s cleverly integrated folklore dimension.

By contrast, Siobhán Parkinson’s Heart Shaped is the strictly contemporary story, set in Ireland, of 14-year-old Annie and her resilience in the face of harrowing personal and familial traumas: poignancy is nicely balanced by wit and literary allusion.

Sheena Wilkinson’s Too Many Ponies , set in Northern Ireland, deals successfully with both equine and young teen worlds, capturing their joys and disappointments and in the process making some shrewd observations about social and cultural pretension in Ulster.

Finally, with Paula Leyden’s The Sleeping Baobab Tree , we travel to Zambia for a mind-opening novel featuring twin sisters, the boy next door and his formidable greatgrandmother: a car journey involving all four provides a wonderfully sustained piece of comic writing in a novel that nevertheless engages with serious contemporary themes.

But as for the “best”? My Honour Award for fiction would go to the Paula Leyden title, which, as some duplication is allowed, would also carry off the book-of-the-year award. The judges may also, at their discretion, nominate a title for the Judges’ Special Award, which on this occasion I would give to Eoin Colfer for his convincing blend of science, technology, politics and wit, and, incidentally, for proving there is life beyond Artemis .

CBI’s laudable organisation of a “shadowing scheme” allows for the country’s children to participate in the awards by selecting (from the titles already shortlisted by the judges) their “children’s choice”. Foolhardy as it may be to predict a possible outcome in this category, I would venture a guess that Landy might top this poll.

The benefits and drawbacks of winning awards will be one of the topics discussed at this year’s CBI conference, The F Word: Failure , to be held on May 24th and 25th at the Light House Cinema in Smithfield, Dublin 7.

Speakers will include Brian Conaghan, Laura Dockrill, David Mackintosh and Leslie Patricelli, and the keynote address will be given by Ireland’s third Laureate na nÓg, whose identity will be announced on May 8th.


Full conference details from 01-8727475 or childrensbooksireland.ie