Out this month, The Cockroach sees a man wake up as prime minister, hellbent on a mission to carry out the will of the people 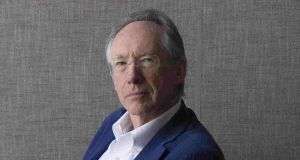 In Kafka’s Metamorphosis, Gregor Samsa awoke to discover that he had been transformed into a monstrous beetle. Now, in Ian McEwan’s surprising next project, Jim Sams wakes and finds he must endure a worse fate: he has become the British prime minister.

Announced on Thursday, and to be published in just two weeks’ time on September 27th, The Cockroach is McEwan’s 16th work of fiction and his second to be published this year, after the novel Machines Like Me. Following the transformation, Sams – who was “ignored or loathed” in his previous life – finds himself with new powers and a new mission: to carry out the will of the people.

A reckless, self-harming, ugly and alien spirit has entered the minds of certain politicians and newspaper proprietors... What's got into them? A cockroach or two, I suspect

“Nothing must get in his way: not the opposition, nor the dissenters within his own party,” reads a description by McEwan’s publisher Jonathan Cape. “Not even the rules of parliamentary democracy.”

Announcing the book with a condemnatory statement, McEwan said the novella would be “a political satire in an old tradition”.

“As the nation tears itself apart, constitutional norms are set aside, parliament is closed down so that the government cannot be challenged at a crucial time and ministers lie about it shamelessly in the old Soviet style, and when many Brexiters in high places seem to crave the economic catastrophe of a no deal, and English national extremists are attacking the police in Parliament Square, a writer is bound to ask what he or she can do. There’s only one answer: write,” he said.

“Mockery might be a therapeutic response, though it’s hardly a solution. But a reckless, self-harming, ugly and alien spirit has entered the minds of certain politicians and newspaper proprietors. They lie to their supporters. They express contempt for the judges and the rule and norms of law. They seem to want to achieve their ends by means of chaos. What’s got into them? A cockroach or two, I suspect.”

The author has long been a vocal critic of Brexit, describing himself as a “denialist”. In April, he told the : “Sometimes, I wake in the morning wondering what is bearing in on me, and then I remember. Brexit does seem to me a national tragedy. The great lie of the Brexiters, their magic dust, was to persuade 37% of the electorate that the EU, not the UK, was in charge of immigration, and they succeeded.”

In Machines Like Me, McEwan imagined an alternate Britain led by prime minister Tony Benn, who takes Britain out of the EU. In the book, Benn refuses to have another referendum, because “only the Third Reich and other tyrannies decided policy by plebiscites”, he says, “and generally no good came of them”. – Guardian