And the winner of this year’s Francis MacManus competition is...

RTÉ announces short-story contest winners, all of which will be broadcast on Radio 1 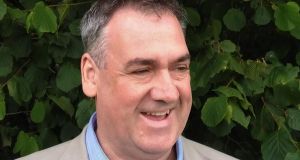 Francis MacManus award: Stephen O’Reilly, whose story is a tale about a menage-a-trois of sorts between Ava, Grace and James, only one of whom is human

A short story by Stephen O’Reilly this evening won one of Ireland’s longest-established literary prizes, the RTÉ Radio 1 Short Story Competition in Honour of Francis MacManus, at an awards ceremony in Dublin.

O’Reilly, who lives in Galway, won first prize of €3,000 with his story Honey Days. It will air on RTÉ Radio 1, read by the actor Jane Brennan, this month, in The Book on One’s new season of writing. Having a story broadcast in the competition has become almost a rite of passage for serious writers.

A tale about a menage-a-trois of sorts between Ava, Grace and James, only one of whom is human, it is, O’Reilly says, “a short story about isolation and the limitations of a speculative technology: can it ever understand the complex requirements of its end user, in particular the human need to feel loved and valued?”

O’Reilly was previously shortlisted for the award, which honours the craft of fiction written for the ear. Judges this year, choosing from more than 2,000 entries, were the author and former finalist Liz Nugent, RTÉ’s arts and media correspondent, Sinéad Crowley, who is also an author, and Declan Meade of the Stinging Fly.

“There’s no typical Francis MacManus story,” said Crowley, who was “delighted with the variety of this year’s shortlist, particularly with the elements of dystopian fiction and science fiction”, such as in the winning story; the judges were also impressed by the range and style of stories, from literary to comic.

Niall McArdle won second prize, worth €2,000, with Vena Amoris, the story of a marriage told by an object intrinsic to that marriage. “I suppose the story is a version of the old idea ‘If these walls could talk’,” said McArdle. “I was interested in how we attach significance to objects, and I wanted to tell the history of a marriage from an unusual perspective.”

It is voiced by the actor Eamon Morrissey, who told its producer, Sarah Binchy, that he cried when he first read it. Also previously shortlisted for the Francis MacManus award, McArdle won the RTÉ Guide/Penguin Ireland Short Story Competition last year, and was shortlisted for the Hennessy Literary Awards and the Cúirt New Writing Prize.

Liz Houchin, a writer and poet living in Dublin, took third place, and a prize of €1,000, with The Boxer Rebellion. In her short story, read for radio by Janet Moran, Stella sits at the edge of the bath with ratty hair and baby food on her top, watching her husband brush his teeth; she doesn’t recognise his underwear and decides their marriage must be over.

Liz Nugent commented: “I thought I only liked tales that were full of plot and incidence, explosions and perhaps a bit of murder, but this one caught me completely off guard because of the simplicity of its telling and the commonality of its experience.”

Houchin, who has a master’s in creative writing from University College Dublin, won the UCD Haiku Competition and recorded her poems for the Irish Poetry Reading Archive.

RTÉ’s director general, Dee Forbes, said: “A story that’s written for the ear is so different to one that’s only meant to be read on the page. The RTÉ Radio 1 Short Story Competition in Honour of Francis MacManus harnesses that very intimate relationship we in Ireland have with the radio. We are delighted to make these stories available for the whole country to listen to on the national airwaves.”

High-profile shortlisted writers and winners of the competition, which has been running since 1986, include Claire Keegan, Danielle McLaughlin (who was also a judge last year), Molly McCloskey, Ivy Bannister, Anthony Glavin and Nuala O’Connor. All shortlisted stories are produced for radio broadcast.

The other shortlisted writers and and their stories for 2019 are Mel O’Doherty, for The Planters; Sheila Barrett, for News; Triona Walsh, for Salt; Niamh Heery, for Filling in Blanks; Deirdre Roycroft, for Toby, Toby, Toby; Edward Melvin, for Out the Pontoon Road; and Stephen Walsh, for WonderHouse (Some Assembly Required).

The three winning stories will be broadcast on RTÉ Radio 1 from Monday, September 16th, on The Book on One (weekdays, 11.20pm), with the seven shortlisted entries following over two weeks.