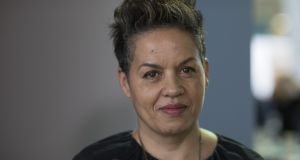 Second novels can be notoriously difficult to write and publish. It can often involve an editor desperately trying to cajole, wheedle and plead a traumatised author to write. Traumatised either because the first book hasn’t been shortlisted for numerous prizes/sold a million copies/been lauded globally – or because it has. Either way an author is at this point usually writing a book for readers; readers they’ve met at events, readers who’ve posted reviews, real people who have read their work – and that can be a little inhibiting. A first novel is usually written with no reader in mind at all.

I was incredibly lucky as Kit, diligent, brilliant and hard-working woman that she is, delivered her second novel before publication of the much -lauded My Name is Leon. The other problem that often affects second novels is that they try to do a similar thing to the first novel. The Trick to Time is like a second child, just as loved as the first, but entirely different to its predecessor and as uniquely itself as My Name is Leon.

Working with Kit has been a joy from start to finish. She is incredibly collaborative, open, funny, prepared to accept suggestions, and equally important, prepared to bat them away if it doesn’t meet her creative vision for the book.

Editing is really as simple as being an involved reader – it is also a huge privilege and allows one to tweak and question various decisions. If I feel a character is unjustly dealt with I can interrogate that; if I don’t think someone is as likeable as they can be, I can ask the question why. Or if I feel an ending doesn’t quite give the redemptive hit that is needed I can suggest a change. Often an author will have a very sensible reason as to why they’ve reached a decision about a character, while sometimes they don’t realise what effect a decision they have made about a certain scene or character would have on a reader.

The editing process can be as simple or as uninvolved as simply to heighten or soften a scene very slightly, or to remove a word, a repetition, point out a gap, or an inconsistency. Often, and at its best, it is a creative conversation where questions are asked and an author, in answering those questions, solves a gnarly problem. It is possibly like encouraging an author to think of the soft furnishings after they’ve decorated the room and made it beautiful; perhaps it is the literary equivalent of suggesting where to add the cushions and the flowers.

The Trick to Time shifted a little in the editing process: Mona became younger, less sad, more fun, less of a grandmother figure – Kit realised she was writing someone who felt more like they were in their late seventies than just 60. We shifted some scenes around at the beginning – the novel originally started with Mona in hospital having a suspected heart attack and now it starts with the glorious image of Mona, very early in the morning, looking out at the sea and spotting Karl, likewise not sleeping. “They face each like two characters in an opera, lit from above, waiting for the music to start.” And so it begins..

I greedily wanted more of the happy times – we gradually started to see more of William and Mona in their young and happy years, there were more scenes with Mona with friends, less of her alone, more of her as a child, and she became wittier, and stronger. Her background was more fleshed out and we saw her as a child and more of her close and loving relationship with her father.

Kit is a genius at creating characters that really live on the page and that is because they really live in her head as people. They have hinterlands, lives, relationships that we never see in the novel, but Kit develops anyway. Even minor characters really live in her imagination like close family members, or friends she knows intimately. Kit knows everything about them – if she wanted to she could tell me about their second cousin, the accident they had when they fell off their bike aged six, who their first crush was, who their parents were, experiences they had at school, what colour their favourite cardigan is! I have never met an author whose characters lived so viscerally inside her head. In fact Kit’s next short story collection will take some of these much-loved characters from both novels and tell us further incidents from their lives.

And then there was the title. Originally called The Dollmaker we had to change it as another book had recently been published with the same title. I should think between us we came up with probably 150 titles and we agonised, procrastinated, gave up, and started again. Now I think The Trick to Time is perfect and can’t imagine it ever being called anything else.