‘I had two operations, chemo, radiation, my wedding and turned 50 before I hit send’

Nicola Pierce Q&A: ‘You will never be lonely as long as you have a book in your hand’ 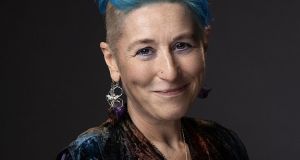 Nicola Pierce: “I first read The Diary of Anne Frank. as a teenager and it was hugely inspiring to discover a book written by a 15-year-old. “ Photograph: City Headshots Dublin

Tell us about your new work and how it came about - the story behind the story.
Brian Walshe, the curator of Dundalk Museum, brought my attention to Dundalk native Sir Francis Leopold McClintock. From there, I read about McClintock’s involvement in the search for the lost ships of the Franklin expedition to the Arctic. As soon as I started researching this incredible story, I knew I had found my fifth children’s novel.

Sir John Franklin and his second-in-command Captain Francis Crozier sailed their two ships, HMS Erebus and Terror, to the Arctic in 1845, in search of the last 300 miles of the fabled Northwest Passage. They were never seen again and, as if that was not interesting enough for a children’s novel, I discovered the documented story of the spirit of four-year-old Weesy Coppin who died in Derry in 1849. The two stories are forever entwined but you will need to read my novel to understand how.

What was the first book to make an impression on you?
I was fascinated by The Diary of Anne Frank. I first read it as a teenager and it was hugely inspiring to discover a book written by a 15-year-old. After that, I was in awe of her courage and discipline. For me, it is still one of the most important books ever to be published.

What was your favourite book as a child?
I was a fiend for Enid Blyton but am very grateful to whoever introduced me to Little Women. My first real brush with historical fiction was winning a copy of Children on the Oregon Trail by Rutgers van der Loeff.

And what is your favourite book or books now?
I loved Eleanor Fitzsimons’s biography of children’s writer E Nesbitt and I just finished the wonderful All the Lives We Ever Lived by Katherine Smyth, a memoir about the loss of her father entwined with her love for the writings of Virginia Woolf. I also have to mention Parisian Lives by Deirdre Bair, her memoir about her experiences as the biographer of Samuel Beckett and Simone de Beavoir. I am also enjoying Nicola Cassidy’s novel about Fred Astaire’s older sister, Adele.

What is your favourite quotation?
“Home, there’s magic in that little word”. It’s from Christian Melodies, a book that is one of the artefacts from the doomed 1845 Sir John Franklin Arctic expedition, the subject of my latest children’s novel.

Which Irish author should everyone read?
Hard to choose just one . I love John Boyne, Nessa O’Mahony and Peter Donnelly.

What famous book have you not read?
Where to start … War and Peace; The Collected Works of William Shakespeare; the Harry Potters and the David Walliams and so on …

Where and how do you write?
Usually I work in what used to be a small bedroom. However, I am allowing my husband, who is working from home, a temporary placement and, consequently, I have relocated to the kitchen table. I use my laptop and my daily goal is 2,000 words although it has been a while since I have managed that.

What book influenced you the most?
My favourite book about writing is Ann Patchett’s This is the Story of a Happy Marriage. I loved the blend of memoir with a writing manual, a dream combination as far as I am concerned.

Who influenced you the most?
A lot of people inspire and influence me, from Saoirse Ronan to Maya Angelou. However, I must also mention the remarkable men and women that I have gotten to know through the Gary Kelly Cancer Support Centre. I am so grateful for their support and friendship.

What advice would you give to an aspiring author?
Well, the usual, read as much as you can. Keep a diary for practice. Also, cultivate a love for good films – they’re all about story-telling and the delicate building of character and atmosphere.

What weight do you give reviews?
I could lie and say none but the truth is I could quote verbatim the bad stuff while all the good reviews are jumbled together in the mist of days gone by.

What has being a writer taught you?
I was 50,000 words into my first draft of my fifth children’s novel, Chasing Ghosts, when I was diagnosed with stage three breast cancer bringing everything to a halt. I have learned that when I am prevented from writing there is usually a good reason – be it some information or image that I will happen across and which will prove beneficial to the story.

If you were to write a historical novel, which event or figure would you choose?
I am fascinated by the life of Chief Sitting Bull. He led the Native Americans against General Custer’s cavalry at the 1876 Battle of Little Big Horn or, as it is more commonly known, Custer’s Last Stand.

Which sentence or passage or book are you proudest of?
I could mention the ending of my first children’s novel Spirit of the Titanic but I am so proud to see Chasing Ghosts, An Arctic Adventure Story finally out in the world. I went through two operations, five months of chemo, five weeks of radiation, my wedding and turning 50 before I was able to hit ‘send’.

Where is your favourite place in Ireland, and in the world?
I generally fall in love with places I have written about. So, I absolutely love walking the walls of Derry after writing about them in two children novels, Chasing Ghosts and Behind the Walls. I also love Belfast and Cobh after writing two books about the Titanic. I love Drogheda because I live here now and wrote a novel about the Battle of the Boyne. And I love Tallaght because that is where I am from.

What is your life motto?
You will never be lonely as long as you have a book in your hand.
Nicola Pierce’s new children’s novel, Chasing Ghosts, is out now. It is available from all online booksellers and obrien.ie @NicolaPierce3

Boy George: The bits 'Who Do You Think You Are' didn't tell you about singer's Irish family
Real news has value SUBSCRIBE