Reviews in brief: A traditional novel evoking the colours and aromas of India

Reviews: The Tainted, by Cauvery Madhaven; Her Other Language, by Natasha Cuddington and Ruth Carr; The Mutual Admiration Society, by Mo Moulton; Artemisia, by Anna Banti; The River Home, by Hannah Richell; The Fall of the House of Byron, by Emily Brand; Lampedusa, by Steven Price; Lives of Houses, by Katie Kennedy and Hermione Lee; and The Last Day at Bowen’s Court, by Eibhear Walshe 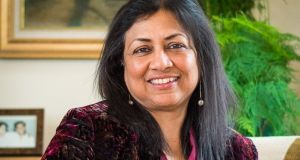 The Tainted’s greatest strength lies in Cauvery Madhavan’s evocations of the colours, aromas and sticky heat of India

The Tainted
By Cauvery Madhavan
Hope Road, £9.99
The Tainted, set in India from the years 1920 to 1982, opens as a traditional account of star-crossed lovers: Michael Flaherty, an Irish soldier, and Rose Twomey, an “Anglo-Indian” (a term that encompassed Irish-Indians). The narrative then leaps forward in time to follow the milieu of their descendants. It’s clear Madhavan knows Anglo-Indian history, and has researched thoroughly. At times, the desire to convey this knowledge lacks subtlety; there’s a lot of expository dialogue and clunky explication (although it was great to learn where the phrase “go doolally” comes from, Deolali being the name of a town with a military sanatorium). Ultimately, The Tainted reads like a traditional, late-Victorian novel – A Passage to India feels edgy in comparison. Its greatest strength lies in Madhavan’s evocations of the colours, aromas and sticky heat of India – the descriptions of the food had my mouth watering. – Lucy Sweeney-Byrne

Her Other Language
Edited by Natasha Cuddington and Ruth Carr
Arlen House, £10
Funded by the Arts Council of Northern Ireland and Allstate, Her Other Language is an anthology of stories, poems, excerpts and scenes articulating the realities and representations of domestic violence and abuse. A showcase for women writers, the collection affirms the power of creativity and the fragility of identity in the face of systemic trauma and abuse. As these narratives emerge out of the contested space of Northern Ireland as it struggles to find its way in a post-conflict era, domestic violence and sectarian violence become two sides of the same terrible coin. The message that resonates throughout each of these pieces, and within the anthology as a whole, is the idea that language and creative thought can offer freedom where freedom does not exist. These stories speak of reality lived and reality shaped by women who have found their voices. Available online from whiterow.net  (£10+ p&p) Proceeds to Women's Aid.– Becky Long

The Mutual Admiration Society: How Dorothy L Sayers and Her Oxford Circle Remade the World for Women
By Mo Moulton
Basic Books, £20
In other interesting times . . . the early 1900s saw Dorothy L Sayers and a group of female friends at Oxford name themselves the Mutual Admiration Society (MAS) to forestall male colleagues’ facetiousness. These friends embodied the slow-moving changes in English society, gaining access to third-level education and being among the first women to graduate with full degrees. Talented and influential in literature and education, they were ground-breakers but were still restricted by society’s expectations. Moulton clearly has great love for these women who tried to create a world where people could become so much more than the limits of their birth allowed them to be, and masterfully details their personal trials and tribulations through years in which many established rules changed for the better. – Claire Looby

Artemisia
By Anna Banti
Small Axes, £9.99
Banti beautifully brings to life Artemisia Gentileschi, one of the great painters of the post-Caravaggio era, in this affectionate and carefully constructed novel. A lyrical style keeps dialogue to a minimum, inner narrative drives biographical detail, and Banti ably alternates between her own first person musing in war-torn 1940s Florence to the third person voice of 17th-century Artemisia. Artemisia was a radical in a patriarchal age; more talented than her male peers. She faced a life of suffering from these men in her time in Rome, Naples, and England – yet refused to be a victim, as Banti poignantly documents. If invented, Artemisia would be an unforgettable character; her being real makes her more remarkable. This testament to her also assures Banti’s place in European culture. – NJ McGarrigle

The River Home
By Hannah Richell
Orion, £16.99
This is the fourth book by Richell, whose previous novels include Secrets of the Tides and The Peacock Summer. Initially well-paced, with hints of a mystery at the heart of the Sorrell family who have gathered at home in Somerset, the story dips a third of the way through and never really gains traction after that. Three sisters who are all living their adult lives away from the homestead, return for middle sister Lucy’s last-minute wedding. The sisters are not good at communicating, and their problems and secrets are revealed over the course of the weekend. Richell writes with compassion for her characters’ plights, and there are some good scenes that draw the reader in, but overall it does not satisfy as it should. More showing and less telling, along with tighter editing, would have made this a better book. – Doreen Finn

The Fall of the House of Byron: Scandal and Seducation in Georgian England
By Emily Brand
John Murray, £25
This portrait of three generations of the Byron family is compellingly plotted, and Emily Brand renders a deeply imagined world for her reader. The book’s movement between tenses is a little disorientating, however, and takes a while to settle into. There is a tension here between the typical past-tense of historical scholarship, and the newly popular present-tense style of some historical fiction. In this way, the form and apparatus of the book sometimes strains against its more imaginative, literary texture. That said, the book is stitched with poetry, and shines with a dark, Romantic glamour. Brand’s work is often sumptuous and atmospheric, global in its scope, and insightful in its understanding of these passionate, sometimes brutal characters. – Seán Hewitt

Lampedusa
By Steven Price
Picador, £14.99
The relationship between art and artist is at the heart of author and poet Steven Price’s second novel. Lampedusa is a reimagining of the life of Giuseppe Tomasi di Lampedusa, author of the inimitable Italian classic, The Leopard. It’s 1950’s Sicily, and Giuseppe is nearing death. Haunted by personal and political trauma, memories of Mussolini and war, he sets out to write his masterpiece. “Neutralize your nostalgia”, his wife tells him. Weaving fact and fiction, Price takes a clever, meta, look at the writing process. He asks: was Giuseppe also writing biographical fiction? Price’s dignified prose is reminiscent of the venerable classic. Lampedusa is a captivating look at life and legacy. – Brigid O’Dea

Lives of Houses
Edited by Katie Kennedy and Hermione Lee
Princeton, £20
This book looks at the lives of houses from the perspectives of archaeologists, novelists, poets, illustrators, biographers, historians and literary critics and explores the houses of writers, politicians, composers and other artists. While some of the properties still exist, Lee considers trying to “imagine back into the life of a past house” that has gone. Some write about their own family homes but it is the homes of great writers and how they inspired and wrote about them that engage the most. Among the most interesting chapters are those on Churchill’s Chartwell, Edward Lear’s Villa Emily, Auden’s St Mark’s Place and Yeats’s Thoor Ballylee. By looking at where they lived, we get intriguing insights into and sometimes unusual perspectives on well-known politicians and writers that we might not otherwise have acquired. – Brian Maye

The Last Day at Bowen’s Court
By Eibhear Walshe
Somerville Press, €15
Writer Elizabeth Bowen characterized her novel The Last September as “fiction with the texture of history”, and that is also the tone of Walshe’s homage to her in this filigreed, delicate imagining of her 31-year love affair with Canadian diplomat Charles Ritchie. Much has been written about Bowen’s life and work, but this atmospheric and beautifully-balanced novel captures more about her than many a scholarly study. Seen also through the eyes and ears of Ritchie’s wife Sylvia and Bowen’s husband Alan, the affair is portrayed as four-dimensional, complicated, messy and often hurtful. The central question was, always, who loved who the more intensely? Hold that in your head when you read this compelling book. You will approach Bowen’s own writings in a different light after doing so. – Ian D’Alton