Advertising the Black Stuff in Ireland 1959-1999: through a Guinness glass brightly 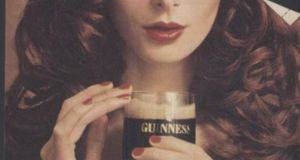 As almost every barrier to female advancement was beginning to be dismantled, Guinness advertising reflected this throughout the four decades

Marshall McLuhan regarded a country’s advertising as a treasure trove of information and insights about that country.

From an Irish perspective, Prof Anthony Clare remarked that, “if we are going to be discussing the future of Ireland the role of advertising in shaping the culture must be included – these advertising people are tapping into elements of what is commonly called culture for a variety of hard-headed business reasons – they can give us cultural information but we need to keep an eye on them”.

I think those last few words are a clue to why the vital role of advertising to reflect the mood and culture of a society hasn’t been properly utilised; the academic disciplines that might be tempted are inclined to look down their pedagogic noses at advertising, which is why Dr Patricia Medcalf’s book is not only welcome but ground-breaking.

The time period she has chosen, 1959-1999, is particularly apposite. 1959 was at the heart of one of the most dramatic periods of Irish social, cultural and economic history. 1958 saw the publication of the first programme for economic expansion; Ireland’s opening up to the wider world. In 1959, de Valera finally handed over the reins of power to Sean Lemass and 1960 saw the election of John F Kennedy as president of the US, giving us a new sense of self confidence. RTÉ began transmission in 1961, bringing the rest of the world to our living rooms and in 1962 Vatican II provided another significant break with the past.

The closing date is also significant. 1999 initiated the birth of the digital era; Google was less than a year old but, together with Facebook, it would grow into a monster of Frankenstein proportions, promising more accurate targeting for advertisers, but all too often at the expense of creativity.

The result was a global efficiency pandemic where famous creative campaigns were banished into lockdown. A recent report from the Institute of Practitioners in Advertising in London concluded that advertising, “has become flat, abstracted, dislocated and devitalised – it has lost its humanity-and become dislocated from its time and place”. So, it looks like the 40 years covered in this book will be looked back on as the golden age of TV advertising in Ireland.

Those years were of course a time of seismic transformation in Ireland, one of the most dramatic being the change in the status of women as almost every barrier to female advancement was beginning to be dismantled. Guinness advertising reflected this throughout the four decades, from the amusingly direct approach in the 1970s – “Trousers and Guinness were only for men, but now that you’re wearing the trousers isn’t it time you had a Guinness” to the more sexually explicit Monogamy in the 1990s, which the author discreetly describes as “a story of love, lust, betrayal and disappointment”.

I was delighted to see that the only TV ad Medcalf reprints is the entire voiceover is the classic I Believe ad featuring the great Stanley Townsend’s delivery on Sandymount Strand standing in the shadow of the Poolbeg chimneys: “I believe the DART should run to Tallaght, I believe in flushing toilets, washing your hands and leaving the seat down”. Isn’t it amazing how prescient those who work in advertising are; the DART (well, Luas) now runs to Tallaght and we’re all washing our hands and leaving the toilet seat down.

The book also comments on an underlying tension in the relations between local marketing departments and agencies and head office marketing teams and their global agencies. This inevitably leads to problems when a global agency is imposed on the local market. One London agency, HHCL, launched a disastrous Big Pint series of commercials in the 1990s and Medcalf doesn’t pull any punches in stating that, “they convey a lack of understanding of the Irish psyche and Guinness’s deep associations with Irish culture”.

An important theme running through the book is whether advertising is a driver to or a reactor of social change. This is a subject that comes up regularly and although academia, to some extent, and the media often regard advertising as having the capacity to play an active role in society, those who work at the coalface tend to be more sceptical and incline to the belief that advertising reflects society rather than shapes it.

Medcalf takes an admirably nuanced approach, pointing out on the issue of female emancipation that “it is difficult to conclude that Guinness was responsible for the gradual change on the status of women in society, however, its ads probably supported the movement by normalising images of women in pubs or engaging in activities traditionally associated with men”.

At the heart of this book is the important subject of cultural branding. Cultural consumption theory acknowledges that goods not only have a utilitarian character but are also able to carry and communicate cultural meaning. Sometimes this is deliberate and today we see numerous examples of brands consciously adopting positions on societal issues to demonstrate “brand purpose”.

Nike’s campaign featuring American footballer Colin Kaepernick, “Believe in something even if it means sacrificing everything”, is a good current example. But often cultural meaning can be communicated unconsciously through a combination of insights gathered from detailed research among the population that precedes major advertising campaigns and the innate feel for zeitgeist that characterises the best creative teams. This study of the last 40 years of the 20th century through the lens of Ireland’s most iconic brand is a good example of how a study of cultural branding can illuminate aspects of that period.

I’m not suggesting that Advertising the Black Stuff should replace the collected works of Diarmaid Ferritter and Roy Foster, but it can augment what they have to say and hopefully it may inspire other academics to dip their toes into advertising’s Aladdin’s cave and add to our understanding of our collective times past and present.