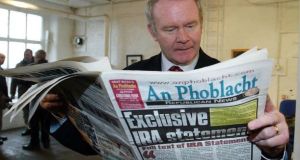 The late Martin McGuinness of Sinn Féin with An Phoblacht, which printed its last monthly edition in late 2017

When the internet was still a shiny new thing, before smart phones and wireless technology put it in the hands of Instagramming micro-celebrities, Snap Chatting teenagers and jihadist radicals, it was seen as something that would change politics for better, forever.

New spaces would open up magically to give voice to global countercultures of the financially, politically and culturally oppressed and reinvent the public sphere which had been dominated by the mutually beneficial interests of global political and media elites.

A decade and a half later the utopian claims for the net seem, at best, dreadfully naïve, and at worst, a form of propaganda perpetrated by technology corporations, and the politicians and commentators who were invested in this myth. To paraphrase the great Belarusian writer Evgeny Morozov, we have been suffering from a net delusion, and are slowly waking up to its effects.

For those of us with a keen eye on Irish republicanism and a knowledge of its tendency towards factional splits, the potential of the net and new forms of activist practice to provide a transformed political space was greeted with now justified cynicism.

Irish republicans from Sinn Féin, to dissidents like the 32 County Sovereignty Movement and the newer socialists of éirígí, were forging an ecosystem online, using free spaces to hammer out the structural transformations of a political worldview being dynamically remoulded by internal change and the effects of the peace process.

Irish republicans were more ideally suited to, pardon the pun, the guerrilla nature of the net, because they had been engaged in countercultural media practices for more than 200 years

And Irish republicans were more ideally suited to, pardon the pun, the guerrilla nature of the net, because they had been engaged in such countercultural media practices for more than 200 years.

Sinn Féin was an instinctively successful and engaged presence online – former senior party activist and current Dublin West TD Eoin Ó’Broin said republicans had been producing countercultural literature dating back to the newspapers of the United Irishmen in the late 18th century.

Ideologically important republican figures such as John Mitchel, Arthur Griffith, James Connolly, Frank Ryan and Peadar O’Donnell had been gifted and prolific journalists. When faced with marginalisation from the mainstream in the late 20th century, republicans turned again to the legacies of these totemic leaders in generating pamphlets and papers.

In the 1970s, while the worst years of the Troubles raged, there was, to quote Sinn Féin grandee Tom Hartley, “a cottage industry” of free sheets in Belfast and Derry conveying the republican agenda in the face of a broadcasting ban in the Republic of Ireland and counter-insurgency of the security forces in Northern Ireland.

The party papers Republican News and An Phoblacht merged in the late 1970s and maintained almost unbroken publication until the latter printed its last monthly edition in late 2017. The militaristic rhetoric of the paper during the Troubles was attacked, pilloried and parodied by non-republican observers, and its demise wrongly heralded on many occasions. But despite this marginalisation, Sinn Féin quixotically maintained a steadfast commitment to producing these activist outlets.

The newspaper and pamphlet maintained an almost sacred place in the republican activist repertoire, even if they simply moved online. This deep historical commitment to writing and publication meant that republicans recognised the potential of blogs, YouTube and social media much more immediately than their opponents. A study of the Northern Irish blogosphere in the period before the development of Facebook and Twitter shows that there were very many more republicans writing and debating online than unionists or loyalists.

Fourthwrite and The Blanket became a kind of “mosquito press”, an irritating and snapping counterbalance to the propaganda of the peace process and Sinn Féin’s reforms

This dynamism was never better illustrated than on the pages of two magazines partly produced by former republican prisoners: Fourthwrite and The Blanket, which became a new kind of “mosquito press”, an irritating and snapping counterbalance to the propaganda of the peace process and Sinn Féin’s reforms. They characterised themselves as supporting the peace but being against the process: how prescient their scepticism towards the process is now.

Fourthwrite, a hard copy magazine with an online presence, edited by Tommy McKearney, attempted to articulate a new socialist republican agenda and place it in a global countercultural left space during the ideological maelstrom of the early peace process. It was one of the bestselling political magazines in Northern Ireland when it launched in 2000 and it maintained publication for more than a decade.

The Blanket, edited by Carrie McIntyre, with her husband Anthony as the senior writer, sought to provide a lively space for all views on both republicanism and politics beyond. Its one rule was: as long you are willing to put your name to a piece of writing, we’ll publish it. When debates raged on whether to publish cartoons of the prophet Muhammad in the mid-2000s, the Blanket not only published them, but also produced profiles of the 12 cartoonists behind them.

Eloquent, beautifully written evocations of the new identity Northern Ireland needed to develop were written 17 years ago on the pages of the Blanket by former UVF leader Billy Mitchell

One of the ironies of the sectarian nature of the current peace process is that some of the most eloquent and beautifully written evocations of the new identity Northern Ireland needed to develop were written 17 years ago on the pages of the Blanket by former UVF leader Billy Mitchell.

When the Blanket shut down in 2008, after six-and-a-half years of twice-weekly publication, Mick Fealty, editor of Sluggerotoole.com, himself a pioneer of the Northern Irish online commentariat, said: “More broadly an era of protest has passed. There are still a few who are attempting to carry on the armed struggle the IRA effectively abandoned 14 years ago. But for many others, the Blanket gave another, more civil account of a term that has more commonly been reserved for republican paramilitaries who refused to follow the lead of the Provisional IRA: ‘dissident’.”

When framed by nearly two centuries of highly productive and dynamic activist communication, it should come as no surprise that republicans have become an adept and strong presence in the Northern Irish and Irish social media spheres, but it is not as a result of these spaces opening up.

Journalists and politicians decry the so-called “Shinnerbots”, the multitudes of Sinn Féin supporters who are said to police online communication and bully anyone daring to challenge the party’s agenda. There is ample evidence to support this, despite some Shinnerbots’ claims that this is fake news.

But another reading of this phenomenon is that it reveals the young, engaged and dynamic membership and support that the party enjoys among millennial digital natives as well as those forced to seek out alternative forms of communication while marginalised from the mainstream. Writing and communicating from the margins can be said to be central to their DNA.

However, the potential of the internet as a space of meaningful political engagement has withered as social media shattered the Northern Irish political public sphere across a multiplicity of competing channels and accounts.

Social media’s relatively limited capabilities in terms of form means that the quality of writing has declined – how much can you really say in 280 Twitter characters? Twitter has made stars of controversialists whose shock value is forced to escalate as their last utterance becomes tired and quickly forgotten. It has also been the birthing ground of an anonymous army of trolls who hit and run, leaving destruction in their wake.

On Facebook, with its smaller, more private networks, there has been much less inter-community political engagement than there was in the 2000s. Many more people might be tweeting and commenting, but it has coarsened discourse, made it more ghettoised and rendered it ineffective for articulate political debate.

Sinn Féin’s political power and adept social and activist media strategies won the internal republican ideological battles begat by the peace process 25 years ago and there is little sustained countercultural opposition to the project in the dissident organisations. Other than Anthony McIntyre’s Pensive Quill blog there’s not much high-quality dissenting writing remaining. Social media was a zero-sum battleground and the Shinners comprehensively won it.

Republicans across its political spectrum put in hard, often-ignored yards in political communication before the net made it easy for everyone. Consequently, it can be argued, they were uniquely placed to make ideological hay online while the others were still snoozing.
Shinners, Dissos and Dissenters: Irish Republican Media Activism since the Good Friday Agreement by Dr Paddy Hoey is published by Manchester University Press, £75