Heroes and Marvels of the Middle Ages: Unicorns and other creatures 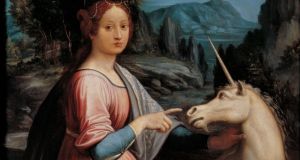 The unicorn could only by captured and tamed by a chaste young girl.

If you are a parent of an eight-year-old girl you are likely to meet unicorns on a daily basis. Multicoloured unicorns with rainbow-hued manes and tails on T-shirts and pyjamas and drawings stuck on the fridge. Your daughter will write stories about unicorns and even have one as pet in some virtual technological world she inhabits with her friends. And when you ask what’s so great about unicorns you’ll be told, “Well, they’re magic!” But you still won’t get it.

To begin to understand, you need to go straight to the unicorn chapter of this first English translation of Heroes and Marvels of the Middle Ages by the French medievalist Jacques le Goff (1924-2014). The existence of the unicorn has been attested since classical times, including in Pliny’s De Rerum Natura, but the key text, Goff tells us, is a Gnostic treatise written in Greek in Alexandria between the second and fourth centuries AD, and soon translated into Latin, called the Physiologus:

1 Ireland among countries urged to consider reinstating Covid-19 restrictions
2 Lowest numbers in two weeks as one more Covid-19 related death and 35 new cases reported
3 ‘I’ve been sleeping with my girlfriend’s sister. I need help. What do I do?’
4 Ward at Naas General Hospital closed due to suspected Covid-19 outbreak
5 Former Sinn Féin member apologises for anonymous social media abuse
6 Government begins work on new medium-term plan in Covid-19 era
7 Irish Michelin two-star restaurant to sell kebabs and fries from takeaway trailer
8 Russia set to begin Covid-19 vaccinations within weeks
9 Council closes Salthill diving tower over social distancing problems
10 Talk of a Covid-19 vaccine by spring of 2021 is just too soon
11 Fintan O’Toole: Turning a blind eye to meat plants a very old habit
12 AIB concedes Covid-19 mortgage policy was ‘regrettable’
13 Meteor shower: watch out for nature’s most spectacular annual show
14 Maura Higgins: ‘I really hated it. Apart from that massage, the rest of it can kiss my ass’
15 Stripe lures Dhivya Suryadevara from General Motors to be CFO
16 New Zealand’s largest city in lockdown after first coronavirus cases in 102 days
17 Covid-19: Face coverings not mandatory in Michael Healy-Rae’s shop
18 Revised help-to-buy scheme opens for applications
19 Stephenie Meyer on Midnight Sun: ‘This was just a huge, pain-in-the-butt book to write’
20 ‘No demand... because there are no people’ at well-known Dublin pub
21 Northern Ireland-born British and Irish win EU citizenship rights
22 Should we hand over the deposit for a house before getting all the documents?
23 North’s Minister for Health expresses concern amid rise in Covid-19 cases
24 ‘We can be fined how much?’ Shoppers mask up in Dublin city centre
25 When will the first Covid-19 vaccine be used in Ireland?
26 Sinn Féin apologises as member resigns over social media abuse
27 Religious oaths must be removed from State activities
28 No buns, no sauce, no fries, no wedges: How to make the perfect chip butty
29 Provisional liquidators appointed to Dublin city centre nursing home
30 Sturgeon threatens Scottish football shutdown after Celtic player’s trip to Spain
31 Co Meath creche closes after five Covid-19 cases confirmed
32 New crime fiction: Shot in the arm for the hackneyed serial killer yarn
33 Sea life around Mauritius dying as Japanese tanker oil spill spreads
34 Senator Lynn Ruane: I had a few wild years. Pregnancy calmed me down
35 Bar on drinking of Achill Island tap water due to ‘staycations’
36 Divorce: What will it cost and can you afford it?
37 Transferring the family farm without a tax headache
38 ‘Saudi Arabia is where the opportunities will happen in future’
39 Nearly 30,000 could lose pandemic payment if they do not confirm eligibility
40 Not the shopkeeper’s job to enforce mask regulation – Healy-Rae
Real news has value SUBSCRIBE